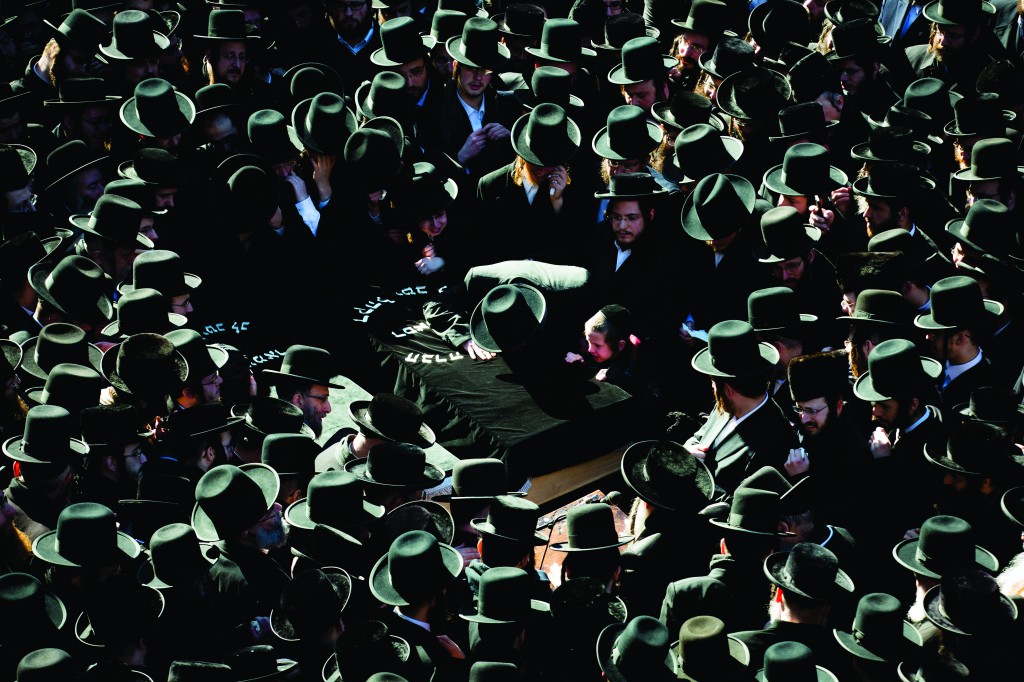 Shock and disbelief gave way to deep mourning throughout the Jewish community as news spread of a devastating tragedy early Sunday morning that took the lives of Reb Nachman and Mrs. Raizy Glauber, z”l, both 21 years old.

The couple was on their way to Long Island Jewish College Hospital when the car service in which they were riding was hit by a speeding BMW, killing both. Their baby was born prematurely and survived briefly, in serious condition,  in Bellevue Hospital. On Monday morning an additional wave of sorrow swept over the grief-stricken community upon learning that the tiny newborn orphan had passed away, quashing all hope of any lasting offspring from the couple.

The driver of the car service was taken to the hospital and then released.

The suspected driver who fled the scene was meeting with an attorney Tuesday and is said to be planning to turn himself in to police. Julio Acevedo, 44, is reportedly claiming that he was speeding away from a gunman who was trying to shoot him.

In Williamsburg, the atmosphere on Sunday was reminiscent of Tishah B’Av; people wept openly in the street as they struggled with the reality of this horrific nightmare.

The tragic news spread rapidly on Sunday morning, prompting an outpouring of grief well beyond the close-knit Williamsburg community where the young couple resided. In Boro Park, a 20-minute drive away, strangers standing in shuls, homes and on street corners wiped away tears and uttered tefillos for the orphaned baby, who soon passed away as well.

Numb with grief, family members and friends were too shocked and distraught to speak about the two. Conversations with acquaintances yielded a portrait of an exceptional couple, whose life revolved around serving Hashem and helping others.

“He always had a good word to say to everyone,” a friend recalled. “When the bachurim organized a visit to kivrei tzaddikim or chipped in for any other purpose, Nachman would be the one to pay for those he knew couldn’t afford it.”

Every night before going to sleep, he studied the sefer Chovos Halevavos, and was often seen reviewing the words of Ani Maamin. He also excelled in the mitzvah of kibbud av va’eim. Roshei Yeshivah and friends repeatedly stressed his chashivus, unwavering hasmadah and yiras Shamayim. He was the pride and joy of his parents. Even during bein hazmanim, Nachman kept to a stringent regimen, learning for ten-hour stretches at a time.

His temimus and ehrlichkeit were exemplary.

Friends and relatives shed copious tears, remembering the joyous wedding celebration of Nachman and Raizy that took place just recently, on January 16, 2012, when the future seemed so bright. Now the pure bayis ne’eman that this idealistic couple had just begun to build was suddenly and tragically eradicated.

The Rosh Yeshivah of Yeshivas Ohr HaTorah, Harav Yaakov Yosef Moscowitz, shlita, exhorted the talmidim to be especially conscientious in their recital of brachos for the next ten days, as a zechus for the precious neshamah.

Nachman’s friends who attended the Satmar Yeshiva in Montreal with him recall that in the two and a half years that he spent there, Nachman was considered the cream of the crop for his excellence in Torah, avodah, and gemillus chessed. He always had a kind word for others, and would attempt to lift others’ spirits. He would attend his friends’ simchos and would liven up the atmosphere. He had a heart of pure gold. He did chessed in every way he could, whether it was physically or financially.

They remember when he fulfilled the mitzvah of v’ahavtem es hager by taking a new convert under his wing. He asked his own parents to allow the man to stay in their home, and invested great effort in raising funds for the ger to be able to attend yeshivah.

He had a great and obvious love for Torah learning, and would begin his daily learning schedule in the wee hours of the morning. He was always happy to learn with others and help them understand the material. He himself would never rest until he understood the whole Gemara and all the Tosafos.

Nachman’s emunah was unique in its purity. He would constantly review the thirteen Ani Maamins that form the basis of our faith, and would always keep Hashem in mind.

When news of the tragedy reached his friends, they were speechless. At the funeral, they found it hard to utter a word and could only look at each other in anguished disbelief as they tried to digest the enormity of the tragedy. It had only been one year and two months since they had joyfully danced at his wedding…

They are planning various undertakings in the merit of the couple’s departed souls.

Raizy’s friends were shattered by the news. The heartrending sobs at the levayah are testimony to the closeness they felt to her. They mourned a precious friend who was sweet and gentle and always radiated goodwill.

A relative of Raizy recalls, “She was always so down-to-earth, so mentchlich. She accorded respect to everyone, whether 10 years younger than her or 20 years older. You never heard her utter a loud word. She was very refined and eidel. She was always so careful with shmiras halashon, steering the conversation away from gossip. She lit up the room when she walked in. I don’t know how her parents will recover from this tragedy; she was their muzinkeh, their whole life and simchas hachaim.”

Raizy was a top student in her class, and very popular. She was refined and kind, with a warm and loving smile. She was always seeking to help others. She was especially well known for her kibbud av va’eim. As the youngest of a large family, she always looked to ease her parents’ burden. They regarded her as their precious treasure and looked forward to seeing her build her own family.

Nachman and Raizy were a glowing and joyful young couple, living their lives in a humble and modest fashion.

The Williamsburg neighborhood has rarely experienced a funeral the likes of which was held for the young couple. The levayah was held on Sunday at 2:00 p.m. in front of the Satmar shul on Rodney Street. The grief in the air was almost tangible. There was no chatter on the streets, only tears.

When the two aronos arrived at the shul, there was a fresh outburst of loud sobbing at the heartbreaking sight. It took a while until silence could be restored and the eulogies could begin.

The Satmar Rebbe, Harav Zalman Leib Teitelbaum, shlita, delivered an emotional hesped. He asked the crowds to pray for the baby and exhorted the people to examine all their deeds and repent, as well as place filters on devices with internet. He spoke about how the home of a Jewish couple is considered a sanctuary for the Shechinah of Hashem, and how Hashem deemed it fit to destroy such a sanctuary among the Jewish nation.

Harav Yaakov Shlomo Meisels, shlita, the Liminover Rav, with whom Reb Nachman had a very close relationship, repeatedly broke down during his hesped. He described how this past Purim, Reb Nachman was concerned with ensuring that they accorded both his and Raizy’s parents the proper respect.

Reb Nachman had also told him about his plans for 21 Adar, the yahrtzeit of Reb Elimelech of Lizhensk, zy”a. And then he tragically passed away on that same day. Today, he concluded, we beg Reb Nachman to indeed use this day to plead before the Heavenly throne to bring an end to all Jewish suffering.

There wasn’t a dry eye as Reb Mordechai Yoel Silberstein, a brother of Raizy, a”h, wept when recalling that only hours earlier, they had sat together with Nachman and Raizy at a melaveh malkah, and now, they were gathered together under such different circumstances.

The very stones of the buildings seemed to weep along as he cried out, “Raizy, where are you? Your refinement… you were incredible! How nobly you always conducted yourself… Forgive us. We will do for the sake of your departed soul… I can’t speak…” He needed assistance from those around him to utter even these few, broken words.

Raizy’s father Reb Yitzchak Silberstein accepted the harsh judgment upon himself and recited the verse in Devarim expressing faith in Hashem’s righteousness and goodness. “You are a merciful G-d Who does only good. I don’t know what to say…” he said.

Then he shouted out the words of the first of the thirteen declarations of Ani Maamin: “I believe with complete faith that the Creator, blessed is His Name, creates and guides all creatures…”

The very heavens wept along as the father Reb Yitzchak cried, “My youngest daughter, how many happy tears did I shed some 14 months ago at your chuppah? We must endure this tragedy, and you have demanded this of me… we weep together… Nachman was such a tzaddik, how he took such good care of Raizy, and Raizy, my youngest daughter, I’ve lost you. It’s painful and we know nothing.

“When Moshiach will come, all of our many questions will be answered. Yes, we wait, how we wait for him! How you embraced me and encouraged me in my most difficult times! I will accept upon myself that Hashem is the true judge, and I hope to say it with complete faith. A person is obligated to recite a blessing upon the bad just as he recites a blessing upon the good. Blessed is He, the Creator… the true Judge!”

A deep, very quiet Amen rumbled through the crowd of one thousand people.

At about 5:30 in the afternoon, the funeral procession left the Satmar shul in Monsey where Reb Nachman’s father, Reb Yom Tov Glauber, shlita, is a respected longtime member.

The cries reached the very heavens when the young father Reb Yom Tov Glauber clutched the aron of his son Reb Nachman as another son, just a little boy, stood at his side and, amidst copious weeping, recited the blessing accepting the judgment of the true Judge.

Only two weeks earlier, Reb Nachman’s parents had celebrated the birth of a new baby.

Then, the two caskets carrying Nachman and Raizy were brought to Kiryas Yoel for burial.

Another cloud of deep grief descended the next morning when the tragic news arrived that the last remaining remnant of the young couple, the little boy born amidst the horror, had also passed away.

The collision of the speeding grey 2010 BMW sedan and the car carrying the Glaubers occurred at the intersection of Wilson Street and Kent Avenue in Williamsburg. The BMW’s driver and a passenger fled the scene and are being sought by police.

Rabbi Yaakov Dovid Klar, director of Outreach, Chai Lifeline’s Project Chai, who spent the night at the family’s side, said that he was in awe of the community’s response.

“What I saw … was unbelievable,” Rabbi Klar said. “The way the community has rallied around these families was incredible, and was a true kiddush Hashem. The community made it clear that they will do all they possibly can to be there for the family members as they deal with this most terrible tragedy.”

May their memories be blessed.

Translated and adapted by Ruchie March.