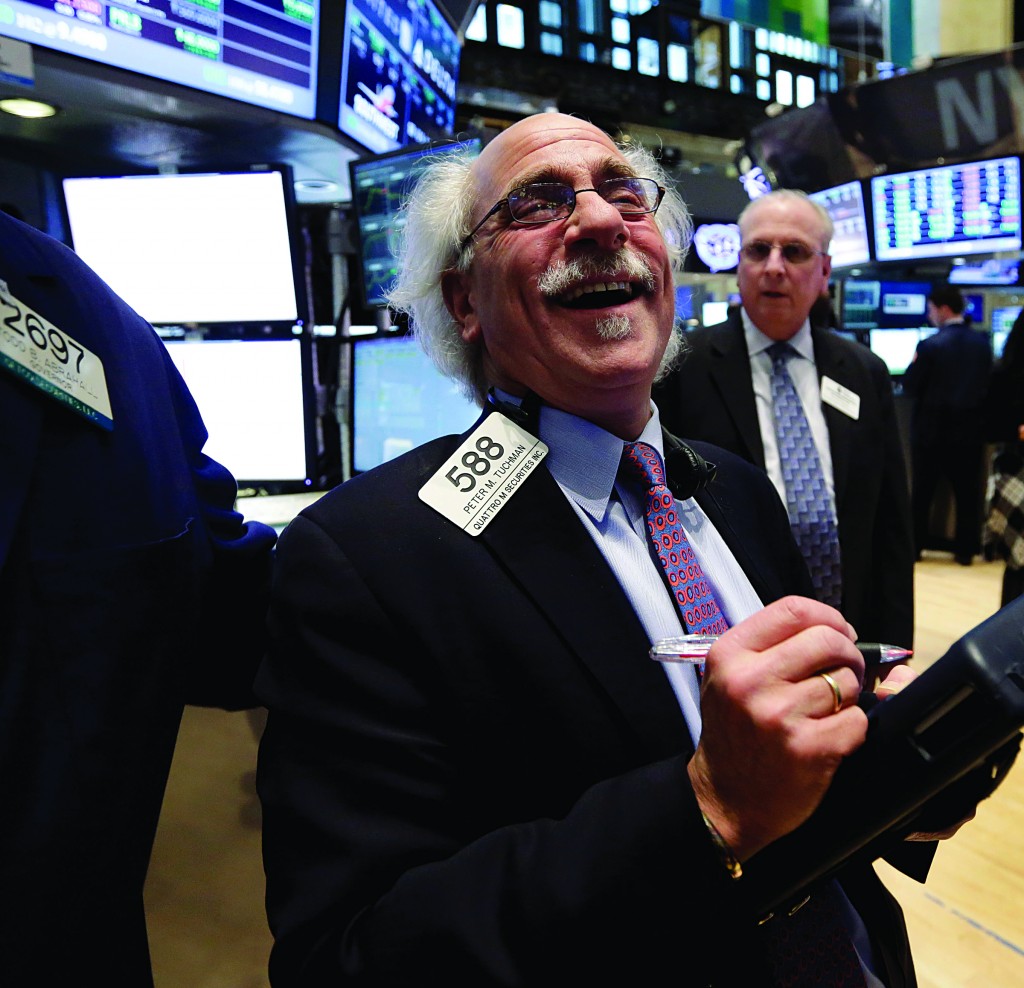 The stock market is back.

Five and a half years after the start of a frightening drop that erased $11 trillion from stock portfolios and made investors despair of ever getting their money back, the Dow Jones industrial average has regained all the losses suffered during the Great Recession and reached a new high. The blue-chip index rose 125.95 points Tuesday and closed at 14,253.77, topping the previous record of 14,164.53 on Oct. 9, 2007, by 89.24 points.

“It signals that things are getting back to normal,” says Nicolas Colas, chief market strategist at ConvergEx Group, a brokerage. “Unemployment is too high, economic growth too sluggish, but stocks are anticipating improvement.”

The new record suggests that investors who did not panic and sell their stocks in the 2008-2009 financial crisis have fully recovered. Those who have reinvested dividends or added to their holdings have done even better. Since bottoming at 6,547.05 on March 9, 2009, the Dow has risen 7,706.72 points or 118 percent.

The Dow record does not include the impact of inflation. Adjusted for that, the Dow would have to reach 15,502 to match its old record.

The last time the Dow hit a record, George W. Bush still had another year as president, Apple had just sold its first iPhone, and Lehman Brothers was still in business.

But unemployment was also 4.7 percent versus 7.9 percent today, a reminder that stock gains have proved no elixir for the economy.

Still, the Dow high is another sign that the nation is slowly healing after the worst economic crisis since the 1930s. It comes as car sales are at a five-year high, home prices are rising, and U.S. companies continue to report big profits.

The stock gains have helped retirement and brokerage accounts held by many Americans to recover. That, in turn, has helped push U.S. household wealth nearly back to its peak before the recession, though many in the middle class are still deep in the hole. Most middle-class wealth is tied up in home values, which are still a third below their peak.

In the depths of the recession four years ago, few investors would have predicted such a fast recovery. Some feared another Great Depression. Banks were collapsing, lending was frozen, world trade was plunging, and stocks were in free fall.

“People thought we were going to relive the 1930s,” says Robert Buckland, chief global stock strategist at Citigroup. He calls the stock gains since “pretty remarkable.”

From its peak in October 2007 to its bottom in March 2009, the Dow fell 54 percent. That was far less than the nearly 90 percent drop in the Great Depression but scary nonetheless. There had been 11 previous bear markets since World War II and none had reached 50 percent.

One man who stayed calm and didn’t sell was Jay Sachs, 70, a retired computer consultant. In fact, as others scrambled to exit stocks in late 2008, he plunged in more – scooping up drug maker Eli Lilly and Co., health-care products giant Johnson & Johnson and food company General Mills.

“You have to be greedy when others are fearful,” he says, quoting a famous line from billionaire Warren Buffett, who also bought in the panic. Sachs adds, “People are still fearful and that’s a good sign. There’s room for growth.”

He says his portfolio has doubled in value in four years.

As stock rebounds go, this has been an unusually quiet and uncelebrated one. Typically, bull markets are accompanied by rising trading volume, a surge in young companies going public and online chatter over hot stocks.

The past four years, none of that has happened.

Dow records are dismissed by some investors as unimportant because the index comprises just 30 stocks. Many professional investors prefer to follow the S&P 500, which, as the name implies, tracks 500 companies. But the Dow has closely followed the ups and downs of its broader rival over the years, and is a good proxy for how big companies are doing.

The Dow record is a victory of sorts for Federal Reserve Chairman Ben Bernanke. Under his aegis, the Fed launched an unprecedented campaign to lift stocks by making their chief rival for investor money – bonds – less attractive.

Under a program called “quantitative easing,” the Fed has bought trillions of dollars of bonds to drive their yields down. The idea was that the puny yields would so frustrate investors, they’d have no choice but to shift into stocks. That, in turn, would push up stocks and make people feel wealthier and more willing to spend, helping the economy.

Just as Bernanke had hoped, American household wealth, or assets minus liabilities, has risen, though the gains haven’t been shared equally.

The rich have been the biggest winners of this bull market. Eighty percent of all stocks are held by the wealthiest 10 percent of households.

The question now: Can the stock rally continue? Here are four reasons it could:

– Plenty of cash: Companies have enough money to keep buying shares, which can push stocks up in the short term. Companies in the S&P 500 had more than $1 trillion in cash late last year, two-thirds more than in 2007.

– Low inflation and interest rates: Two factors that typically spell the end of a bull market seem a long way off. Inflation has been 1.6 percent the past 12 months, below the Fed’s 2 percent target. Interest rates are near record lows; the short-term rate the Fed controls is being kept between zero and 0.25 percent. The Fed has said it plans to keep the rate where it is until unemployment falls below 6.5 percent, or 1.4 points lower than it is today. Even when the Fed starts raising the rate, it could be years before it gets high enough to hurt the economy and stocks.

Four of the five previous bull markets since 1970 ended as investors got spooked by a recession, or the anticipation of one, and sold stocks. And what causes recessions? In three of the past five, it was the Federal Reserve hiking interest rates to slow inflation.

– Economic expansion: The economic expansion that began 44 months ago in June 2009 is still relatively young. The previous three expansions lasted 73, 120 and 92 months. And this one may finally be getting traction: Sales of new homes in January hit the highest rate in 4 ½ years. Home prices in January were up nearly 10 percent nationwide from a year earlier. And sales of autos, the second-biggest consumer purchase, reached a five-year high.

Most important, hiring is picking up. Employers added an average 200,000 jobs each month from November-January, compared with 150,000 in each of the prior three months. More jobs means more money for people to spend, and consumer spending drives 70 percent of economic activity.

– Stocks still seem reasonably priced based on the earnings that companies are generating. On average, stock prices are 17.5 times per-share earnings in 2012 versus 19.4 times in 2007. Today’s price-earnings ratio is the same as the average since World War II.

Of course, if investing was as simple as looking up interest rates and stock valuations, we’d all be rich. Plenty can go wrong.

Few people believed four years ago that the return would be so fast.

A few days after stocks bottomed, a BusinessWeek cover story laid out three scenarios for regaining the losses. The most pessimistic held that stocks would notch 6 percent gains each year and the Dow would return to its old high in 2022, 13 years later. The most optimistic assumed 10 percent annual gains and saw a return in 2017, eight years later. The Dow has rebounded in about half the time as the most optimistic case.