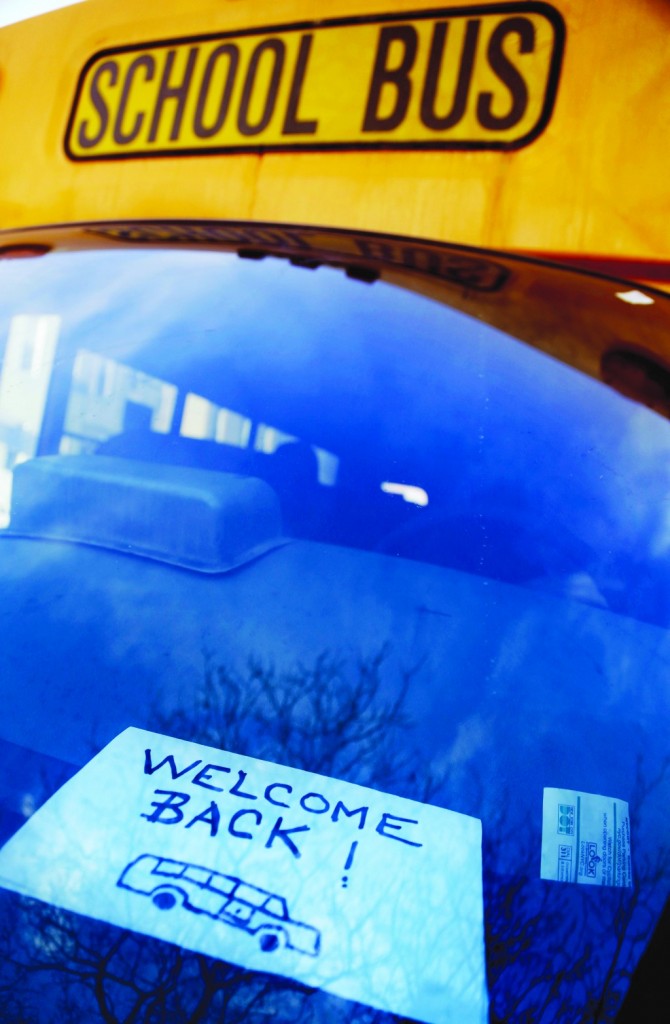 New York City school bus drivers who serve tens of thousands of children were back at work Wednesday after a monthlong strike that forced students, many of them disabled, to take taxis, public transportation or car services to school.

“We’re happy to be back,” said driver Philip Pan, 57, whose dashboard was adorned with a hand-drawn “Welcome back” card, complete with a picture of a bus.

“We’re like a family. We’re really close with these kids,” said Pan, who’s been on the job eight years.

Buses were on their regular schedules Wednesday on all 7,700 routes serving the nation’s largest public school system. Five thousand routes had been affected by the strike. The city has about 1.1 million children in public schools.

But the return to work wasn’t all good news for some workers and parents.

In Brooklyn, more than 100 unionized bus assistants, known as matrons, were fired Wednesday morning when executives of one bus company told them the business was folding and their jobs were gone. Someone answering the phone at Boro Wide Buses said company president Joseph Fazzia had no comment.

Drivers and matrons from the Amalgamated Transit Union Local 1181 walked off the job Jan. 16.

Matron Sandy Cardinale, 56, said her time off the job “was horrible.”

“It’s nice to be working with these kids again,” said the 14-year veteran. “We missed them. I’m so glad it’s over.”

Another matron, Giovanna Impagliazzo, 59, said she was praying for job security.

“I hope … the next mayor knows how hard we work,” she said.

April Dail said she felt more at ease knowing the driver and matron who bus her son Nicos were back on the job Wednesday. Eleven-year-old Nicos, a sixth-grader at M.S. 33 in Brooklyn, has Down syndrome and takes a bus home. During the strike Dail, 33, left work early or relied on neighbors and family to pick him up after school.

“It was hard for us to figure out who would pick him up,” said Dail, who lives in Brooklyn but works on Staten Island.

She said Nicos’s bus matron called Tuesday evening to remind her they would be picking Nicos up after school. “I’m very comfortable with them,” she said.

The city spent roughly $20.6 million in transit cards, taxis and gas mileage to get tens of thousands of stranded students to school during the strike; some still didn’t get there at all, schools Chancellor Dennis Walcott has said. But he estimated the city saved $80 million because it wasn’t paying bus companies during the strike.