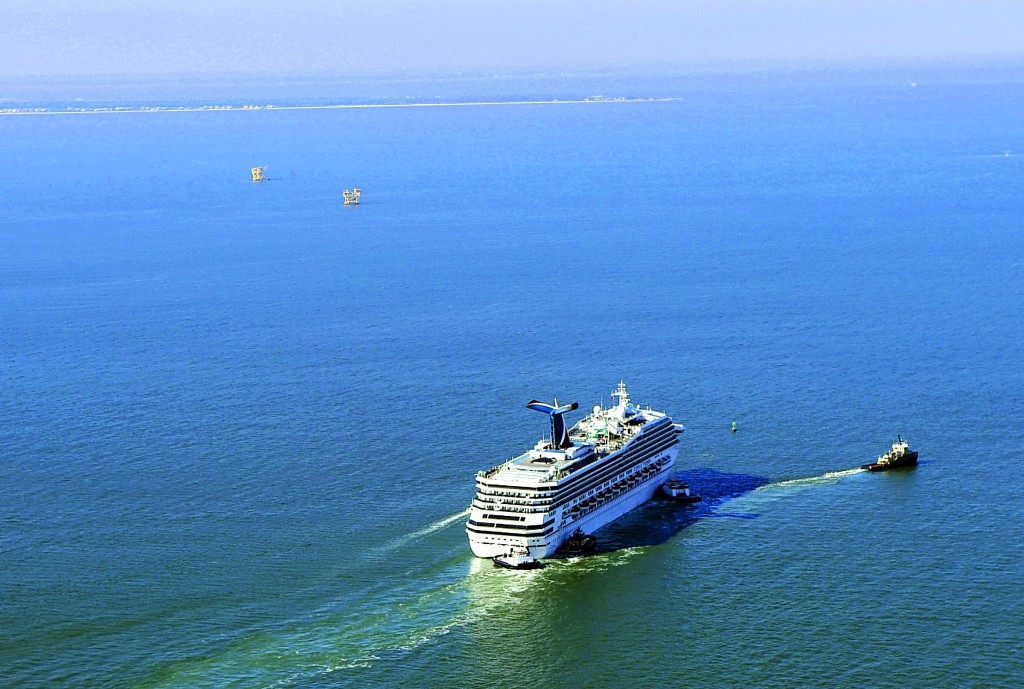 This is not at all how it looked in the brochure. Pulled by a tugboat at a maddeningly slow pace, the ill-fated cruise ship Carnival Triumph finally drew within sight of land on Thursday as miserable passengers told stories of food shortages, foul odors and dangerously dark passageways.

Around midday, four days after the 893-foot ship was crippled by an engine-room fire in the middle of the Gulf of Mexico, the more than 4,200 passengers and crew members suffered another misfortune when the towline snapped, bringing the vessel to a dead stop just when it was getting close to port.

The towline was quickly replaced, and the crawl to Mobile resumed. The ship was expected to arrive around midnight Thursday. Officials said it would take passengers up to five hours to get off the ship, and then they faced an hours-long bus ride or other travel hassles to get home.

Frustrations with the cruise line simmered on and off the ship as passengers and their relatives questioned why it had taken so long to get back to land. The ship left Galveston, Texas, a week ago.

Disgusted by the foul air and heat of the lower decks, many passengers hauled mattresses and bed sheets onto the top deck and slept there, even staying put in a soaking rain. As the ship approached the coast, a slew of Carnival workers arrived, removed the bedding and took it downstairs.

The 14-story ship must negotiate a tricky, shallow shipping channel before docking. The channel narrows to 400 feet inside Mobile Bay, and the ship is about 115 feet wide. It was traveling about 5 mph.

Another passenger said food has been distributed on the 9th floor, making it difficult for some of the elderly to get it. They were initially given cold cuts; then another cruise line dropped off hamburgers and chicken sandwiches, but the line for that fare was nearly four hours long.

The company disputed the accounts of passengers who described the ship as filthy, saying employees were doing everything to ensure people were comfortable. Carnival didn’t immediately respond to questions about the illnesses reported by some passengers.

The ship was about 150 miles off Mexico’s Yucatan Peninsula when an engine-room fire knocked out its primary power source, crippling its water and plumbing systems and leaving it adrift on only backup power.