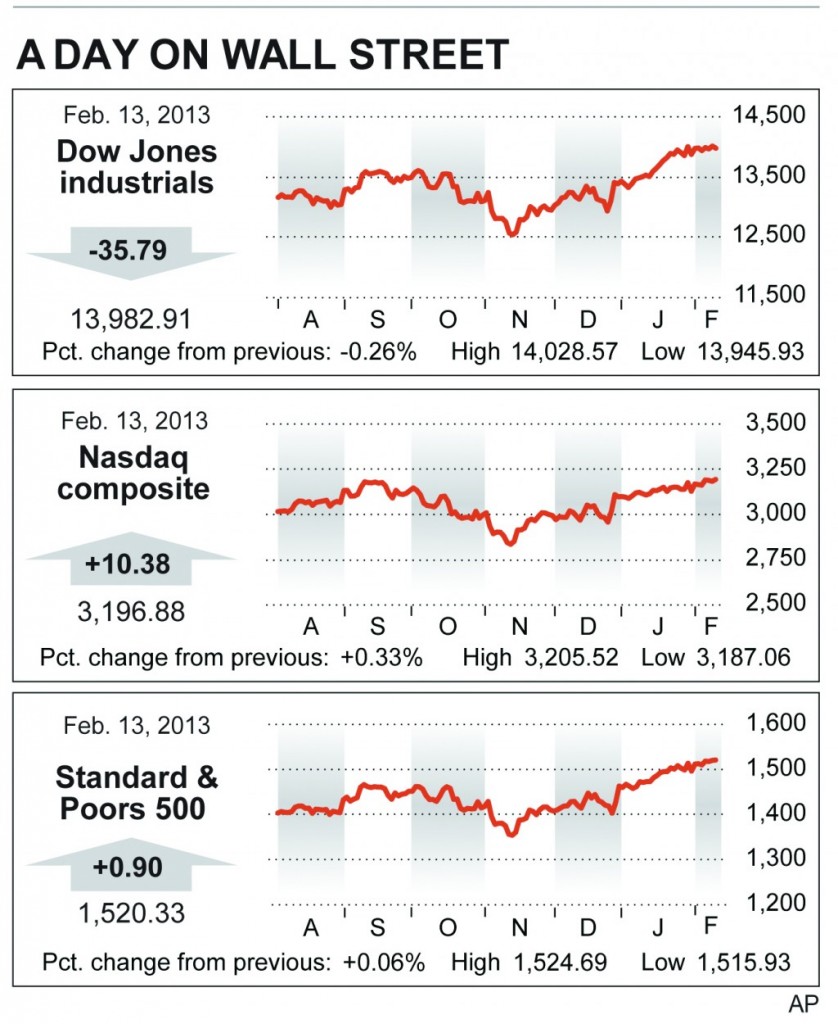 The Dow was held back by a slump in McDonald’s stock Wednesday, leaving it short of a record.

McDonald’s was the biggest decliner in the Dow, losing $1.10 to $94, as investors worried that Americans will spend less on eating out following a rise in Social Security taxes at the beginning of the year. The government reported early Wednesday that spending by Americans barely grew last month.

“Consumer spending is coming under pressure,” said Bryan Elliott, an analyst at Raymond James. “It’s the easiest way to save money, stay at home and cook.”

Investors sent General Electric and Comcast higher after GE agreed Tuesday to sell its stake in NBCUniversal to Comcast for $16.7 billion. GE said it would use up to $10 billion of the money to buy back its own stock. GE rose 81 cents to $23.39. Comcast advanced $1.16 to $40.13.

Trading has been relatively quiet in recent days following a strong opening to the year. The Dow logged its best January in almost two decades after lawmakers reached a last-minute deal to avoid the “fiscal cliff” of sweeping tax increases and spending cuts. Investors are also becoming more optimistic that the housing market is recovering and that hiring is picking up.

“We’re cautiously optimistic on stocks,” said Colleen Supran, principal at Bingham, Osborn & Scarborough. “There is some indication that we could be continuing on this slow growth trajectory.”

Supran said investors should still be prepared for volatility in the stock market and not assume that the gains from January and so far in February will set the pattern for the rest of the year.

Strengthening the economy and creating jobs were key topics in President Barack Obama’s State of the Union address late Tuesday, the first since his re-election. Although the economy is healthier than it was four years ago, growth remains slow and unemployment high.

The government reported that Americans’ spending at retail businesses and restaurants slowed last month after higher taxes cut their paychecks. Retail sales growth slowed to 0.1 percent in January, from a 0.5 percent increase in December.

As stocks have advanced this year, bond prices have slumped.