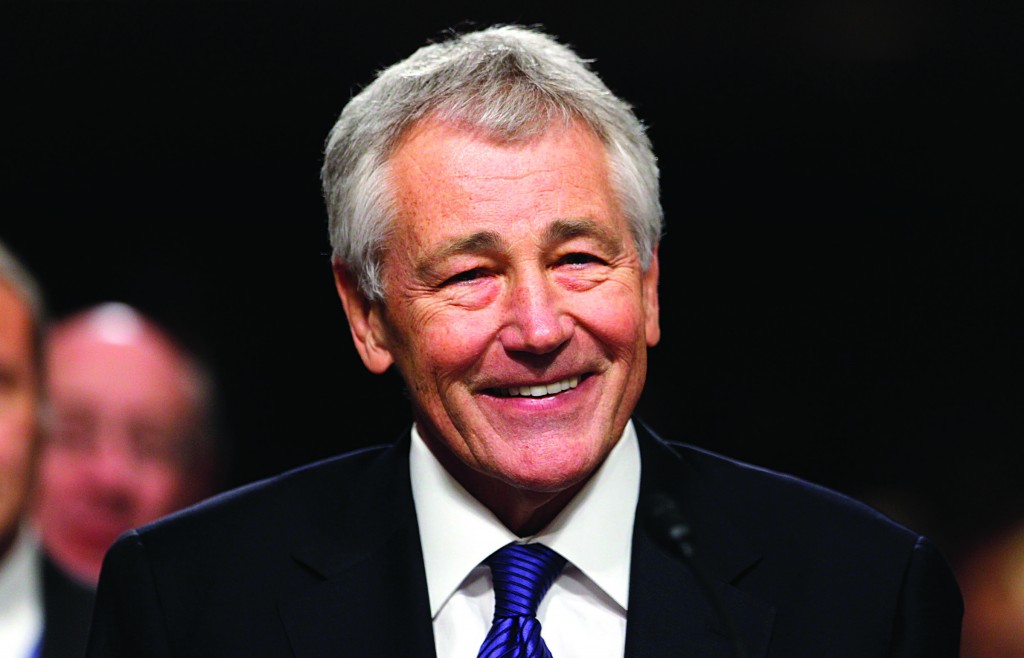 A bitterly divided Senate panel on Tuesday voted to approve President Barack Obama’s nomination of Chuck Hagel to be the nation’s defense secretary at a time of turmoil for the military with looming budget cuts, a fresh sign of North Korea’s nuclear ambitions and drawdown of U.S. forces in Afghanistan.

The Armed Services Committee voted 14-11 to send the nomination to the full Senate, with all the panel’s Democrats backing the president’s choice to succeed Defense Secretary Leon Panetta. The committee’s Republicans were unified in their opposition to their onetime colleague, a former two-term Republican senator from Nebraska and twice-wounded Vietnam combat veteran.

Senate Majority Leader Harry Reid, D-Nev., said he would move ahead with a full Senate vote despite Republican complaints that he was “jamming it through.” A vote is expected on Thursday, and barring any surprises, the Senate is likely to confirm Hagel for the president’s second-term national security team.

Hagel, 66, would take charge of a military facing deep cuts in projected spending; challenges from North Korea, Iran and Syria; and the reduction of U.S. combat forces in Afghanistan.

Democrats, who hold a 55-45 edge in the Senate, have the numbers to confirm Hagel on a majority vote, but would need the support of five Republicans before an up-or-down vote on the president’s Cabinet choice would be allowed.

More than a dozen Republicans oppose the nomination, and the committee’s ranking Republican, Sen. Jim Inhofe of Oklahoma, is insisting that any confirmation be based on 60 votes rather than a majority of the Senate. But several Republicans reject what would be an unprecedented effort to delay a vote on a Cabinet nominee for defense secretary.

Hagel faces fierce opposition from Republicans who have challenged his past statements and votes on Israel, Iran, Iraq and nuclear weapons. Just hours before Tuesday’s vote, foes circulated a memo arguing for more information about Hagel’s personal finances and highlighting past statements by Democratic senators demanding further disclosures when the Senate considered nominees by Republican presidents.

The panel’s chairman, Sen. Carl Levin, D-Mich., said the GOP demands were beyond the scope of those traditionally asked of previous nominees, Republican and Democrat – a point echoed by his Republican colleague, Sen. John McCain of Arizona.

But Sen. Ted Cruz, R-Texas, continued to demand that Hagel provide personal financial information for the past five years instead of the standard two years of committee and Senate rules, and suggested that the panel doesn’t know whether Hagel received compensation from “extreme and radical groups.” He also suggested that Hagel was hiding information.

That angered Levin, who rejected the notion of a different standard for Hagel than for other nominees and said he was “not going to accept your suggestion and innuendo.”

“You basically have impugned the patriotism of the nominee” with suggestions that he is cozy with Iran, Nelson said. “You also stated your opinion that you don’t think he’s truthful. Those are two fairly strong statements.”

The testy exchanges about Hagel prompted McCain to interject, “Sen. Hagel is an honorable man. No one on this committee should impugn his character and integrity.”

Sen. Lindsey Graham, R-S.C., insisted that the former GOP senator was out of the mainstream. “He’s in a league of his own,” Graham said.

McCain, who was a close friend of Hagel’s but split over the Iraq war and politics, said Tuesday he would vote against confirmation. However, late Monday McCain met privately with several committee Republicans and urged them not to filibuster the nomination, pointing out that the roles could be reversed someday with a Republican president and GOP-controlled Senate.

“I’m encouraging my colleagues if they want to vote against Sen. Hagel that’s one thing, and that’s a principled stand,” McCain told a group of reporters. “We do not want to filibuster. We have not filibustered a Cabinet appointee in the past and I believe that we should move forward with his nomination, bring it to the floor and vote up or down.”

All 55 Democrats are expected to back Hagel, and two Republicans — Sens. Thad Cochran of Mississippi and Mike Johanns of Nebraska — have said they will vote for the nominee. At least five Republicans have said they oppose a filibuster despite their reservations or opposition.

More than a dozen Republicans have said they will oppose their former colleague, and several others have indicated they are likely to vote no. Sen. Kelly Ayotte, R-N.H., a member of the Armed Services Committee, said Tuesday she would vote against the nominee, citing his performance at his confirmation hearing.

Hagel seemed ill-prepared under withering cross-examination from committee Republicans in nearly eight hours of testimony on Jan. 31. He was repeatedly pressed about past statements and votes on Israel, Iran and nuclear weapons, with GOP lawmakers suggesting he wasn’t sufficiently supportive of Israel or anti-Iran.