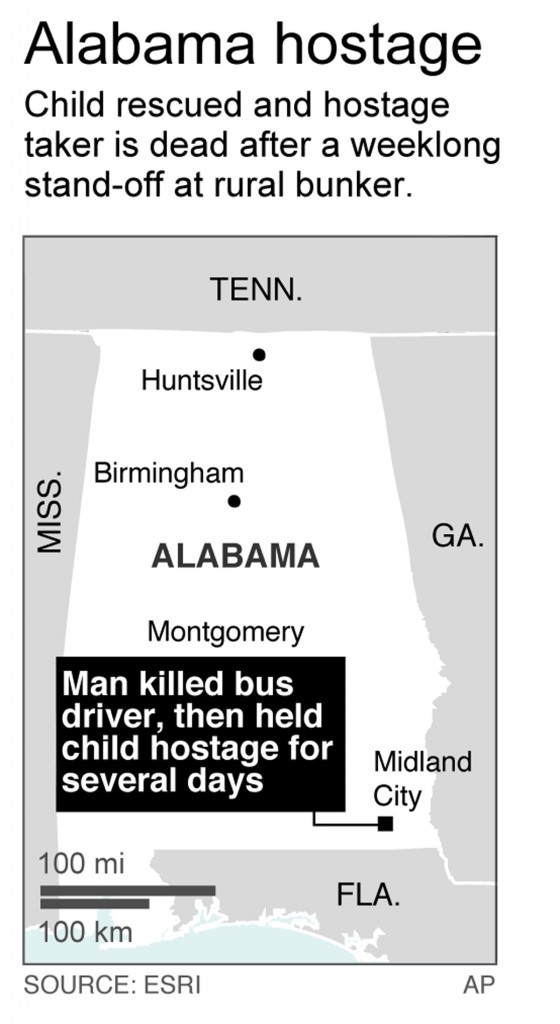 By all accounts, a 5-year-old in endured an unforgettable horror: Held for a week in a closet-size bunker underground, a captive of a volatile killer, his only comforts a Hot Wheels car and other treats passed to him by officers.

Yet after being whisked to safety by federal agents in a raid that left his kidnapper dead, the boy appeared to be acting like a normal kid: He was running around, playing with a toy, eating a sandwich freely, according to relatives and Dale County Sheriff Wally Olson.

“We know he’s OK physically, but we don’t know how he is mentally,” Betty Jean Ransbottom, the boy’s grandmother, told The Associated Press on Tuesday. She added that she feared the ordeal would stay with the child, who turns 6 on Wednesday, the rest of his life.

Meanwhile, authorities grateful for a happy ending embarked on a careful investigation. Agents swept the 100-acre property for explosives for a second day as part of an investigation so painstaking that authorities had not yet removed the body of the abductor, 65-year-old Jimmy Lee Dykes, officials said.

FBI officials have offered few details publicly about the standoff and the raid that ended it. For days, officers passed food, medicine and other items into the bunker, which was similar to a tornado shelter and apparently had running water and heat.

Ransbottom said the family also had not been told much about what happened because of the ongoing investigation. An FBI agent had been staying with the family, and relatives learned of the child’s rescue after another agent at the scene called the agent who was with them.

The family was relieved and grateful for all the support in a community where ribbons, fliers and vigils all symbolized the prayers for the safe return of the boy, whom law enforcement officials have identified by his first name, Ethan. Ransbottom said she didn’t sleep much — and when she did, it was only after crying herself to sleep.

“I never went through anything so horrible,” she said.

On Monday, authorities said Dykes had a gun and appeared increasingly agitated, though it is unclear exactly how his behavior changed. Negotiations — the details of which have not been made public — were deteriorating. Agents stormed the bunker, whisking the boy to safety and leaving Dykes dead.

At the request of law enforcement authorities, Secretary of Defense Leon Panetta had approved the provision of certain equipment that could be employed to assist in the hostage situation, according to a U.S. official who requested anonymity to discuss a pending law enforcement matter. It is not clear whether the equipment was actually used.

In Midland City, a town of about 2,400 nestled among peanut and cotton fields, residents were relieved that the boy was safely rescued from Dykes, a man neighbors described as an unstable menace who beat a dog to death and threatened to shoot trespassers.

Children and teachers were trying to get back to normal, though some children who were on the bus where Dykes killed the driver have not yet returned to school, said Donny Bynum, superintendent of Midland City schools. Counselors and clergy are at the school to help any distraught students.