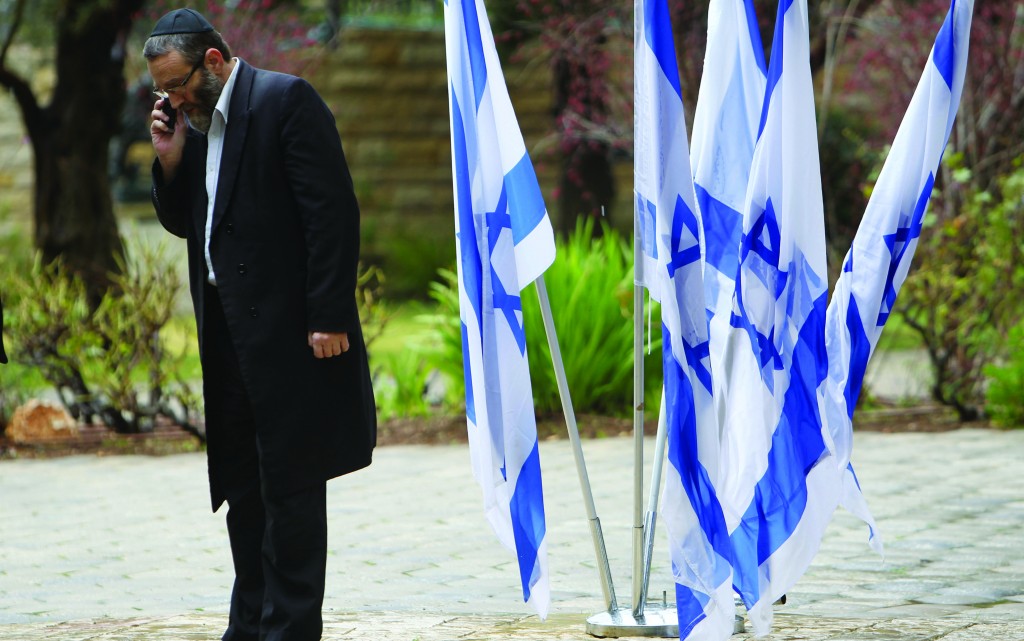 The issue of drafting yeshivah students has already emerged in the first week of coalition talks as a major obstacle to Israeli Prime Minister Binyamin Netanyahu’s desire to build a broad coalition that will include the chareidi parties.

Speaking to reporters after the meeting, Rabbi Litzman said that he expected Yesh Atid leader Yair Lapid’s demand to draft all but a few hundred yeshivah students to be the major issue in the discussions. He declined to speculate as to whether Lapid would compromise.

Speaking to reporters, Rabbi Gafni said that “it would be very much worth the Prime Minister’s while to ensure that Shas and United Torah Judaism are in the government.” They had, he noted, been reliable coalition partners.

But he stressed that “nobody in UTJ would support the idea of putting a limit on the number of yeshivah students.”

Speaking on Army Radio on Monday, Shas leader Eli Yishai said he had discussed the matter with leading national-religious Rabbanim: “I appealed to the Rabbis and I told them to do everything in their power so as not to make a decision on the issue of the world of the Torah that goes against our stance and without our consent,” Yishai told Army Radio.

Yishai told Arutz Sheva that he had also appealed to Jewish Home leader Naftali Bennett to prevent “irreparable damage to the world of Torah.”

Bennett and Lapid have reportedly joined forces to maneuver Netanyahu into a coalition that will exclude the chareidi parties.

Meanwhile, prominent Rabbinical figures in the national-religious camp, including Harav Yaakov Shapira, Rosh Yeshivah of Merkaz Harav, and others, have been meeting with Rabbanim to express their opposition to drafting yeshivah bachurim.

As these Rabbanim are influential figures in the national-religious camp, which forms the bulk of Bennett’s constituency, it would make it difficult for Naftali Bennett to make common cause with Lapid’s Yesh Atid. However, he has said he will not enter the government without Lapid, in an effort to force Netanyahu to give up on broadening the government.

Meanwhile, Lapid has brought upon himself the wrath of Likud-Beiteinu and presumably Netanyahu. Before even taking his seat in the Knesset for the first time as a freshman, he has already spoken publicly about his ambition to be the next prime minister, and that if he were to sit in the opposition he would seek to topple the government within 18 months.

Likud officials expressed surprise at Lapid’s arrogance. They noted that Lapid was able to draw many right-wing votes because he purposely did not present himself as a prime-ministerial candidate and refused to join Tzippi Livni and Shelly Yachimovitz in blocking Netanyahu. However, with his recent long list of demands, it seems that he is more interested in making life difficult for Netanyahu, they said.

Nevertheless, attorney Yoram Raavad, who headed the Likud’s negotiating team in 2005, said that despite tough talk from Lapid about going into the opposition, he sees Lapid playing a central role in Netanyahu’s government.

“Lapid is flexing his muscles but in the end of the day he will be there in the government,” Raavad said. “In the beginning parties always aim high into the sky, but then they have to compromise. Lapid will have to find a way to compromise, as will other party heads.”

Aside from the draft, Lapid has been lobbying for several important ministries and a reduction in the number of Cabinet ministers from 29 to 18, which will make life extremely difficult for Netanyahu in the Likud.