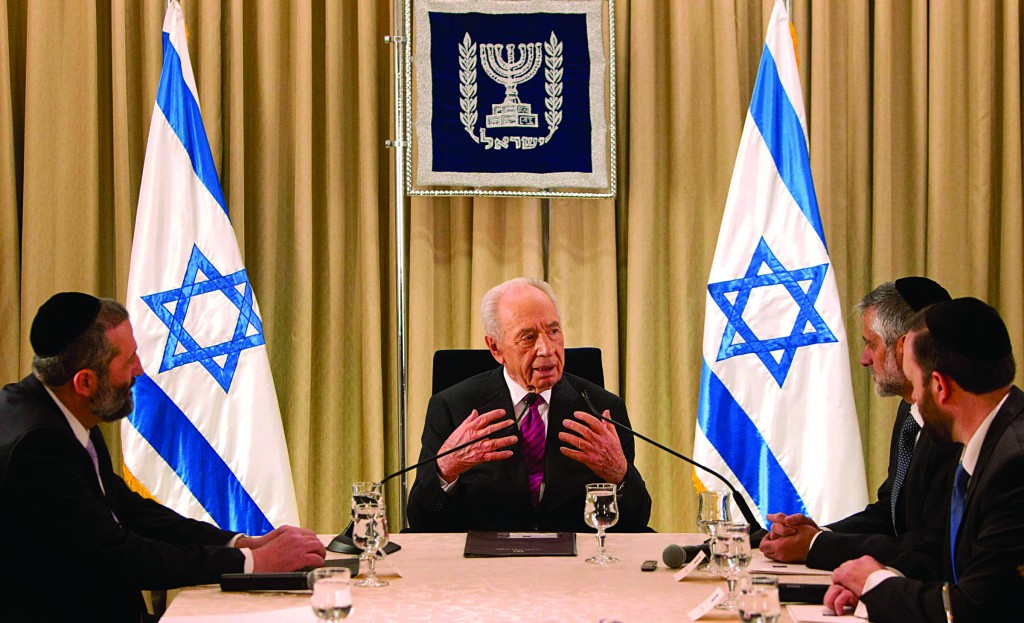 Former foreign minister Avigdor Lieberman fired the first shot in the battle over ministerial appointments in the next government on Wednesday when he proposed that Yesh Atid leader Yair Lapid be named finance minister; his right of return to the Foreign Ministry would be safeguarded until after his legal troubles are cleared away.

Prime Minister Binyamin Netanyahu would prefer to make Lapid his foreign minister, taking advantage of the latter’s perfect British-accented English and his moderate image, which could help improve Israel’s relations with the U.S. and Europe, according to The Jerusalem Post.

But Lieberman has a different idea. “I think that Lapid, who speaks about the middle class and the socioeconomic protests, should naturally focus on domestic issues and take the finance portfolio,” Lieberman said in a press conference at Yisrael Beiteinu’s headquarters.

Lapid, a journalist-turned-politician, has never held a government post.

Netanyahu and Lapid met on Thursday for about two hours, after which they issued a bland communiqué saying the atmosphere was positive. The two discussed “the challenges facing the country and ways to deal with them. They agreed to meet again soon,” the statement said.

Vice Premier Moshe Ya’alon (Likud), a former IDF chief of general staff, continues to be regarded as the front runner for the defense portfolio.

Although Lapid has responded positively to Netanyahu’s invitation to join his coalition, the question of which parties will join them in forming a governing majority was still very much open.

Netanyahu hopes to form a coalition of at least 80 MKs so that no single party would be able to topple it, thereby ensuring its stability, The Jerusalem Post reported late Thursday night.

Also on Thursday, Netanyahu phoned Naftali Bennett of the Jewish Home party but did not schedule a meeting, Ynet said.

A Likud source told The Jerusalem Post last week that Netanyahu would only invite him after a majority had been organized so as to minimize the influence of the right-wing party.

Eager to join the coalition, Jewish Home MK Uri Ariel said he had no problem joining a government in which Livni negotiated with the Palestinians, and Bennett said he was amenable to reconsidering the religious status quo. That would preclude chareidi parties from joining the coalition.

On the other hand, Eli Yishai expressed optimism that Shas will be in the next government. He argued that a Likud-Beiteinu-Yesh Atid-Jewish Home coalition would make a thin, weak majority with little hope of finishing out the full four-year term.

“Let’s be done with the campaigning and spin, and form a stable government,” Yishai said. “For sure it will be complicated, but we need to all sit down together, without exception, and discuss what’s good for the Jewish people and for the state of Israel.”

On Tuesday night, Yishai said that if Lapid “wants to be realistic, he needs to work together with us; otherwise there’ll be no stability.”

The major question hanging over all, however, is that of drafting chareidim, or, to use the current code term, “sharing the burden.” The chareidi parties are unequivocally opposed to any interference in the right of avreichim and yeshivah students to continue their Torah studies, while Yesh Atid has repeatedly committed itself to just that.

While coalition talks proceeded with some publicity, senior Likud members were privately grumbling about the election outcome. They blame Netanyahu for Likud’s poor showing, winning only 20 seats (Yisrael Beiteinu got the other 11) after 27 in the 2009 election.

“Bibi [Netanyahu] had all the tools to win the race,” a minister said in closed conversations reported by the Post. “He could have set the agenda every day, but he did another spin campaign every day and it kept on falling. The Likud is a political burden for him. We can’t escape the conclusion that he wanted a smaller Likud, and that’s why he lost.”

Minor Likud activists, not up for any high office and with less at risk, spoke more openly, complaining that the party made no effort to use them to help it win more seats. They claimed Netanyahu thought he could replace the party’s infrastructure of activists with a media campaign, but was proven incorrect.

“Netanyahu paralyzed the party,” said Ashkelon Likud activist Eli Cornfeld, who was once close to Netanyahu.

“The party’s director-general, institutions and branches are not functioning. There is no transparency. No one knows where the money is going. Bibi has treated party activists as his indentured servants, so it should have been no surprise to him that we fared so poorly,” Cornfeld said.

As an example, Cornfeld cited a polling station in Ashkelon in which only one car was made available to bring elderly people to vote. Many of the 10,000 people registered to vote at the station stayed home because no one could give them a ride, he said.