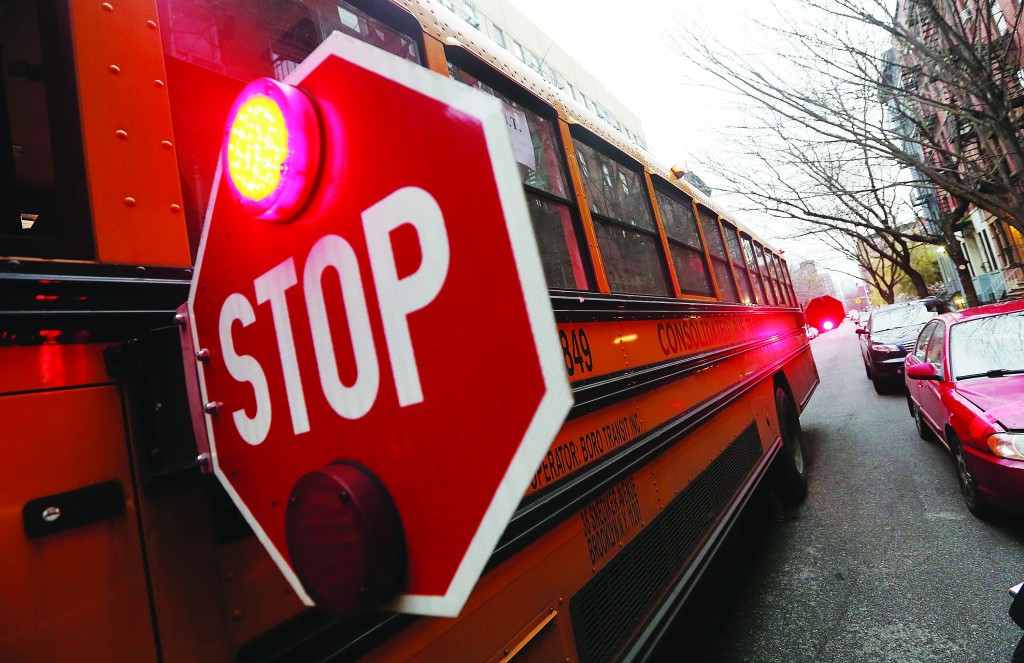 The school bus strike that is entering its second week has had a devastating impact on young schoolchildren, their parents, and schools citywide.

The strike, by Local 1181 of the Amalgamated Transit Union, is over the city’s decision to strip a provision called the Employee Protection Provision (EPP) from its bus company contract bids. This provision allows bus drivers to keep their jobs “based on longevity, regardless of which company they work for,” says Avrohom Pinter, a former superintendent at the New York City Board of Education, and former president of School Board District 6 in Manhattan.

The City contracts with private companies for school bus service; the EPP ensured that if the city switched from Company A to Company B, all the senior drivers from Company A would not lose their jobs.

“The EPP is directly linked to the safety and security of our children by ensuring that the City’s most qualified, skilled, and experienced school bus crews remain on the job,” argues the union. “It protects school bus crews that are both non-union and union employees, further guaranteeing that the most experienced crews remain on the job regardless of union affiliation.”

On Monday, representatives of the union and bus company met at Gracie Mansion at a meeting brokered by Mayor Bloomberg; however, neither the mayor nor any of his representatives were present at the meeting. The mayor has insisted that this is a private issue between the drivers’ union and the bus company; however, the union believes that “Mayor Bloomberg has a responsibility to take part in these discussions and join us at the table. Despite what the Mayor and his administration have said, his involvement in the process is… necessary to move towards a resolution and end this strike.”

But for children, parents, and schools uninterested in union and city politics, the strike has had a devastating impact on their daily lives.

“The strike is affecting us very badly,” says Miriam Berg, pre-school director of Bais Yaakov of Boro Park. “Many of our parents are working, or have large families with small children; it’s impossible for them to get out in the morning and get their kids to school on time, and come back and pick them up at the end of the day.”

The free MetroCards the city has given schoolchildren have done little. “A great majority of our students do not live close to school,” she says, “and MetroCards cannot help them. There is no good public transportation near our school, and we cannot send small kids to and from school on their own.” Many parents have been paying for car services to take the children to and from school every day, but “we are in a very crowded neighborhood, and all the taxis cannot make it down our street.”

One affected mother, named Suri, lives in Flatbush with her husband and eight children, including four who are affected by the bus strike. Her children generally take three different bus services: two of her sons are picked up three blocks from her home at 8:20 AM; one daughter is taken from in front of her home at 8:00; and a third, specially-equipped bus comes at 7:45 to bring her 14-year old wheelchair-bound daughter to the United Cerebral Palsy School on Lawrence Avenue.

“Since the strike, I have been driving my wheelchair-bound daughter the two miles to school every morning, and then picking her up at 2 PM. It has been a terrible hassle for me to lift a 60-lb. wheelchair in and out of my minivan each time; it also ruins the wheelchair and ruins the van.” Suri is a high school math teacher who has been on a lighter schedule during midterms and mid-winter vacation, “but once school starts again on Thursday, I have to be there until 3:15 PM every day, so I will be unable to pick up my daughter; I will have to leave her home all day, and pay for a sitter.”

The city’s proposed remedies for transporting handicapped children have been of little help. “I have heard on news reports that the city is allowing handicapped children to be brought by Access-a-Ride, or use taxis that will be reimbursed. However, I called Access-a-Ride about this, and they said that an adult must accompany any minor child, so I would have to go along with her anyway; and once I’d be dropped off at school, I would have to make my way back home myself, and I’d have to get to the school on my own before pickup at 2 PM.”

Suri says that the reimbursed taxi rides are also of little use. “I would be afraid to send the child on her own; besides, the driver wouldn’t bring her in and out of the van. So either way, I’d have to go along, which would defeat the whole purpose.”

Due to the difficulties in transporting handicapped children to school without the special buses they are used to, many students have not been attending school; Suri says her daughter’s classroom has been three-quarters empty on an average day during the strike.

The experience has been terribly frustrating. “I sent an email to Mayor Bloomberg on the second day of the strike; I got an automated confirmation that he had received the email, but have received no further response.”

“I have been driving my three daughters to and from school every day,” says Rachel Hubner. “Each daughter gets out at a different time, so carpooling won’t work. They do get to school on time because we make ourselves crazy to ensure it.”

Sarah Rivkah Kohn has one girl in kindergarten and one in second grade. Both must be in Bais Bracha school every day by 9 AM. “My husband has been driving them to school every morning, before dropping me off at work, and then driving to work himself,” says Mrs. Kohn. “This has caused me to get to work 20 minutes late on some days; my husband, who starts work later, barely arrives on time.”

Mrs. Kohn has been forced to pick up one daughter from school by car service every day, costing her at least $12 a trip.

Another mother named Leah has also been using car services, with several other parents. “The neighborhood kids go together by car service every day. The kids are too young to go by city bus, and we can’t afford to take off work to take our kids by city bus. It is costing me a fortune in car services.”

“We understand the hardship, and we are allowing children to come late,” says Mrs. Berg of Bais Yaakov. “We are also allowing parents to pick up their children early, depending on how their schedule works out, so that they can avoid the traffic, and avoid having to make several trips to pick up different children at different times.

“It has been a tremendous hardship on the school.”

“It’s extremely frustrating for many reasons,” adds Mrs. Kohn. “It hurts the pocketbook, and it’s a pain in the neck to have to juggle the schedules every day, worrying about where each child will stay at each time on each day. It’s a race against time sometimes, and there’s no end in sight.”

Until the end is in sight, New York City Councilman David Greenfield has been one of the politicians pushing for an end to the strike, and advocating for measures that will make parents’ lives somewhat less difficult until the strike is over.

“We are doing everything we can to work with all schools to try to accommodate them and see if we can get them service on an individual basis,” the Councilman told Hamodia.

Though all parents of young children have undergone difficulties, Mr. Greenfield says that with the limited options available during these difficult times, much of his focus has been on alleviating the hardships faces by those affected most: parents with handicapped children.

“We are trying to prioritize toward special-needs children. I have reached out to the unions and encouraged them to at least end the strike on [buses that drive] special-needs kids.” An email Hamodia sent the union requesting a response to Mr. Greenfield’s request went unanswered.

“We are working with the Department of Education to get those parents vouchers they can use at many different vendors, which is a new thing,” said Mr. Greenfield. “Until a few days ago, parents would have to shell out their own money when using the approved vendors, and then get reimbursed. But now, we are working with the DOE to come up with vouchers, so that at the very least, parents of special-needs children can use vouchers with specially approved vendors,” that would give them free transportation to and from school without having to pay the money up front.

In general, Mr. Greenfield supports a voucher system for school bus service, where parents of all schoolchildren can choose whether to use the city-provided service, or use a voucher for another bus service they choose. “It would be a win-win: parents would have flexibility, while it would cost less for the city.”

Councilman Lew Fidler has also been an advocate of this voucher program. “Councilman Greenfield and I continue to await a sit-down with DOE to discuss an idea that would improve service to yeshivos and save taxpayers money when it comes to school bus service,” said Councilman Fidler. “We made this proposal last year and it was met with allegedly open consideration. Now that all bus contracts are under review, this would be the time to act.”

Mr. Greenfield is critical of Mayor Bloomberg’s refusal to be more involved in ending the strike. “It is his problem, it is his responsibility. This is the job he gets paid to do: to ensure that parents have a way to deliver their child to school, and he is not doing that. This falls squarely in his lap.”

However, Assemblyman Dov Hikind says he fully supports the mayor on this issue. He believes the union’s demand is ridiculous, and that the mayor has indeed gotten involved; he has simply said that his position is non-negotiable.

“It’s very rare that I agree with Mayor Bloomberg, but this time I do,” Mr. Hikind told Hamodia. “Unions are very nice and I am pretty supportive of unions, but for unions to say we have to guarantee their jobs, that we can’t have open bidding, that ‘it’s got to be us and can’t be anyone else’ — that is ridiculous, that is outrageous.

“If another company wins a contract, why should they not be able to choose to use the [drivers] that they have? I am very much for the process being opened up, and for there to be competition. Competition is good for everybody.

“I agree with the mayor. He has made his position very clear, and he is not prepared to negotiate that position. We all hope this comes to an end as fast as possible, because it has created a hardship for many, many parents. But sometimes we have to stand very firm in battle, to win the war.”