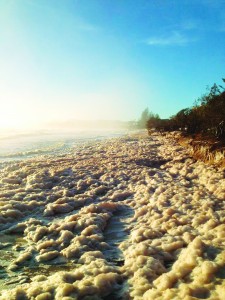 Floodwaters peaked in most of the worst-hit areas by evening. Some communities that were initially expected to be inundated appeared to have escaped major damage, with levees holding back the muddy water in one city that was in the high danger zone. But officials were still urging caution, as fast-moving floodwaters in New South Wales prompted 50 rescues, most involving drivers stuck in cars swept away by the current.

In the hardest-hit city of Bundaberg in Queensland, 385 kilometers (240 miles) north of Brisbane, rescue crews plucked 1,000 people to safety after the river that runs through town broke its banks, sending murky water pouring into streets and homes. Several people had to be rescued from the roofs of their waterlogged houses, while hospital patients were airlifted to Brisbane as a precaution.

“Listen to the roar of the water — that’s not helicopters,” Queensland Premier Campbell Newman said. “You see a lot of locations where there are literally sort of rapids. There’s white water out there, so it is very dangerous.”

Between 2,500 and 3,000 homes and 200 to 300 businesses were inundated with water, Bundaberg Mayor Mal Forman said. Around 1,500 residents were hunkered down in evacuation centers as they waited for the waters to recede.

Queensland residents and officials were being particularly cautious, after floodwaters from heavy rain in late 2010 and early 2011 left much of the state under water in the worst flooding Australia had seen in decades. The 2010-2011 floods killed 35 people, damaged or destroyed 30,000 homes and businesses and left Brisbane, Australia’s third-largest city, under water for days.

The current flood crisis was not as severe, though some areas in northern New South Wales were hit by more than half a meter (about 20 inches) of rain, State Emergency Services Deputy Commissioner Steve Pearce said. Four people have died, including a 3-year-old boy who was hit by a falling tree in Brisbane.

In the New South Wales city of Grafton, 600 kilometers (370 miles) north of Sydney, the river peaked just below the top of the levee wall, prompting relief among officials who had ordered an evacuation affecting 2,500 residents.

“It does appear as though the worst of it is over,” New South Wales Premier Barry O’Farrell said.

The flooding was caused by the remnants of a tropical cyclone that sparked tornadoes and created sea foam that came ashore on the Queensland coast. The foam covered roads in places, causing traffic to be diverted. Elsewhere, beach-goers waded into the bubbles to pose for photographs. The storm system was moving offshore Tuesday evening.

Australia has been suffering through a summer of weather extremes, with blistering temperatures and dry conditions igniting hundreds of wildfires across the southern half of the country.

This article appeared in print on page D13 of the January 30th, 2013 edition of Hamodia.