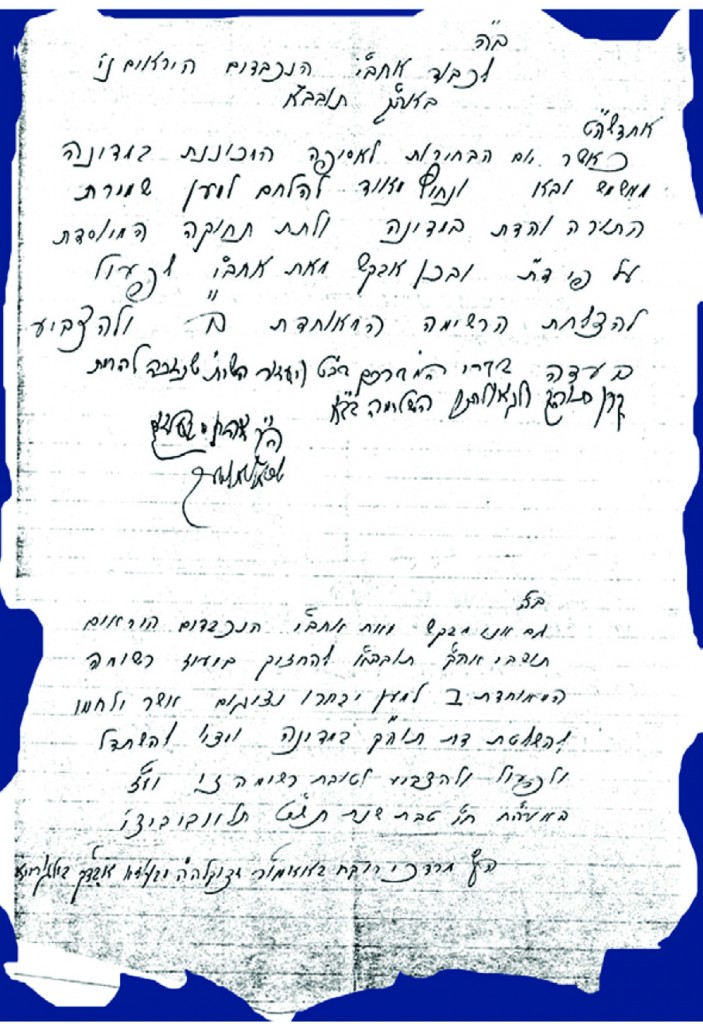 The recent elections in Eretz Yisrael were for the 19th Knesset. If we want a perspective of the chareidi approach towards elections for a secular government in the Holy Land, perhaps a brief introduction is called for.

Upon the founding of the State of Israel 64 years ago, each citizen was granted the right to vote for an elected body that would lead the country. At that juncture, the question was presented to Gedolei Yisrael as to whether chareidi Jewry are permitted to vote. The great majority of the Gedolim said that not only could they vote, but they should do so, instructing the klal to vote for Agudas Yisrael, to help influence the spiritual character of the state.

The first elections were held in 1949, about a year after the establishment of the state.

Gedolei Yisrael signed a kol korei that it was incumbent on each person to vote for Agudas Yisrael. Among the signatories were Harav Aharon of Belz, the Beis Yisrael of Ger, the Tchebiner Rav, zecher tzaddikim livrachah, and numerous other Gedolei Yisrael.

At that time, Agudas Yisrael was part of the United Religious Front, which also included the Mafdal [National Religious Party] and Poalei Agudas Yisrael. The joint list with the national religious sector was the basis of the objection of some Gedolim, such as the Brisker Rav, and that is where the misconception arises that these Gedolim were against voting in general.

The second election was in 5712/1952, and the chareidim ran on a separate list, represented by the letter gimmel, and that’s how it has been ever since.

It should be noted that before the 1949 election, Gedolei Torah came to the Rav of Komemiyus, Harav Binyamin Mendelson, zt”l, asking him to verify if it was halachically permitted to participate in elections.

The Rav wrote a clear teshuvah based on the Rambam and Shulchan Aruch, that although the government was secular, it was permitted to participate in elections.

Harav Yisrael Yitzchak Mendelson, the Rav’s son, says that the teshuvah was not publicized at the time so as not to arouse discord, or even a debate on the subject. The psak was entrusted to a confidant, Rabbi Chaim Mandel, zt”l, of Antwerp, for safekeeping. Before Reb Chaim passed away he gave the teshuvah to an erudite Yid in Yerushalayim.

The call of the Gedolim was unequivocal. A letter penned by the Bilgorajer Rav, zy”a, at the behest of his brother, the Belzer Rav, zy”a, before the first elections, reads as follows:

“As the day for elections for the parliament of the state approaches, and it is very important to fight for the preservation of Torah and religion in the state…Therefore, I ask my brothers to work for the success of the united list, Beis, and to vote for it.”

Here the Belzer Rav added a line in his own handwriting:

“The words of he who blesses them with kol tuv, and may Hashem help that we merit to increase the glory of the holy Torah and to the final Redemption, speedily in our day,

The Beis Yisrael of Ger, zy”a, added his signature under the Belzer Rav’s.

The support of the Belzer Rav for the Agudah list was particularly interesting, because in Galicia, Belz did not join Agudas Yisrael, despite the pleas of the movement’s founders. This was also a source for many to claim that the Rav’s support for Agudah was not wholehearted, and was perhaps orchestrated by those close to him.

They recalled that, at the time, the public was interested in clarifying two questions: Was there a heter to participate in elections for a Zionist government that was not subject to daas Torah and would Belz support Agudas Yisrael?

The Belzer Rav’s response was very sharp. To anyone who asked, he said, “It’s a wonder that a heimishe Yid asks…My father, z”l [Harav Yissachar Dov of Belz, zy”a], wasn’t against Agudah, but rather claimed that in Galicia it was not necessary.”

Harav Weber posits that he believes that the subject of elections was the only one on which the Rebbe expressed himself so sharply in Eretz Yisrael. “There was no other subject for which he went to such great lengths.”

He adds that he heard from Harav Yitzchak Flakser, zt”l, R”M in Sfas Emes, who was a neighbor of the Tchebiner Rav, that on the morning of Election Day, he heard people arguing outside the Rav’s house. They argued that if the Tchebiner Rav didn’t have to go to vote, then why did they? Reb Yitzchak shared what he had heard with the Rav, who told him to go outside and tell the people there that he had already voted. Reb Yitzchak was stunned. “Rebbi, ad kedei kach [to such an extent?]” and the Rav replied, “Ya, ya, ad kedei kach.”

Rabbi Eichler asked the three meshamshim which of them had heard the Rebbe say “Baruch Hashem, I have no regrets about the elections”?

Harav Weber said that the Rebbe had told it to him, and others also heard it. “The Rebbe once told me, ‘My father taught me that if I don’t regret something then it’s a sign that I did the right thing. Baruch Hashem, I don’t regret the decision regarding the elections for even a minute.’ That was the response to all those who came out in opposition to the psak he had issued.”

Harav Landau notes that the Rebbe called for everyone to go out and vote for “Itche Meir’s Agudah.” [Referring to Harav Yitzchak Meir Levin, zt”l, leader of Agudas Yisrael.]

Harav Rutner relates that the Mizrachi movement also came to the Rebbe to ask for support, as hakaras hatov for their assistance in the Rav’s rescue during the Holocaust. They wanted the Rebbe to stand aside and not instruct people to vote for Agudah. But the Rebbe said: “What should I do, you are against the Torah?”

Harav Landau says that there was a Satmar chassid before the war, Reb Yosef, to whom the Rebbe told that it was important to support Agudah in Eretz Yisrael much the way they supported the Orthodox communities in Hungary.

Harav Rutner relates that a delegation headed by Harav Velvel Mintzberg once came to the Rav regarding the establishment of the Orthodox kehillos. The Belzer Rav told them: In Eretz Yisrael, the Agudah is like the Orthodox in Hungary.

The meshamshim recall how the Rav was adamant that everyone go vote, including his gabba’im, and even the Rebbetzin — and they traveled to Tel Aviv, where they were registered as residents. That day, he didn’t take kvitlach [which were conveyed through the gabba’im]. When people came to him with kvitlach, he said, “Go vote.”

Harav Weber, who was then a bachur, relates that only he remained in the Rav’s house while the other gabba’im went to their places of residence to vote.

“The Rebbe said to me, ‘The truth is it was very hard for me to send all the gabba’im away,’” Harav Weber recalls. “‘But I had no choice, because the elections are such a great mitzvah I could not hold them back!’ He waved his two holy arms in the air and said ‘Aza groiseh mitzvah!’ with reverence.”

If the Belzer Rav, who knew what a mitzvah means, said of elections “Aza groiseh mitzvah!”— dare we doubt it?