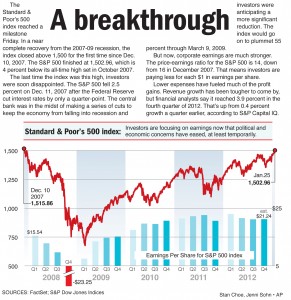 Passing another milestone on the nation’s long journey back from the Great Recession, the Standard and Poor’s 500 index closed above 1,500 for the first time in more than five years Friday after a wave of good earnings reports.

It took scores of incremental gains, several stalled rallies and a few sickening falls, but the widely watched S&P, one of the broadest measures of the American stock market, finished at 1,502.96, up 8.14 points. The index had not closed above 1,500 since December 2007, the start of the worst economic downturn since the 1930s.

The news came on top of other hopeful signs that the economy is slowly recovering. Housing is rebounding. Companies are hiring again, albeit slowly, and their earnings, a big driver of stock prices, are at record levels.

The breakthrough happened on an eighth straight daily gain for stocks, itself a remarkable performance. That is the longest winning streak since November 2004.

Stocks have surged this month, with the S&P advancing 5.4 percent. It jumped at the start of the year when lawmakers reached a last-minute deal to avoid the “fiscal cliff.” Signs that Europe has avoided financial collapse also helped.

Stocks fell sharply during the Great Recession. By March 2009, the S&P was 57 percent below its October 2007 peak, a harrowing plunge that scarred a generation of small investors and, some Wall Street experts believe, will keep them away from stocks for years to come.

Since that fall, the market has climbed sharply, though it has endured several big declines. In May 2010, a trading glitch set off a so-called flash crash that sent stocks plummeting. And in August 2011, stocks gyrated like a roller coaster for several days as fears mounted that the U.S. would default on its debts.

On Friday, stocks were helped by earnings from two big companies. Procter & Gamble, the world’s largest consumer products maker, rose $2.83 to $73.25 after reporting that its quarterly income more than doubled. P&G also raised its profit forecast for its full fiscal year. Starbucks climbed $2.24 to $56.81 after reporting a 13-percent increase in profits.

On Friday, Apple continued to decline, allowing Exxon Mobil once again to surpass the electronics giant as the world’s most valuable publicly traded company. Apple fell 2.4 percent to $439.88, following a 12-percent drop on Thursday, the biggest one-day percentage decline for the company since 2008, after Apple forecast slower sales. The stock is now 37 percent below the record high of $702.10 it reached Sept. 19.

The yield on the 10-year Treasury note, which moves inversely to its price, climbed 11 basis points to 1.95 percent.

Among other stocks making big moves was Green Mountain Coffee Roasters, which rose $2.53 to $46.31 after an analyst noted that sales of a competing coffee brewer introduced by Starbucks were getting off to a weak start.

This article appeared in print on page 8 of the January 28th, 2013 edition of Hamodia.