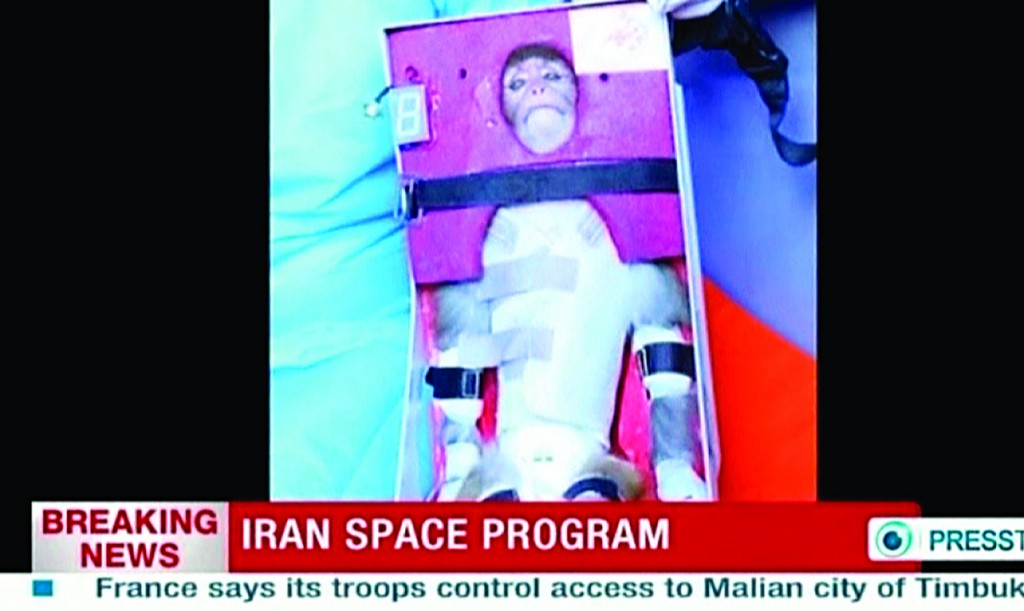 A gray-tufted monkey strapped in a pod resembling an infant’s car seat rode an Iranian rocket into space and returned safely, officials said Monday in what was described as a step toward Tehran’s goal of a manned space flight.

The mission also touched on concerns that advances in Iran’s rocket expertise could be channeled into military use for long-range weapons that might one day carry nuclear warheads.

Launching a live animal into space — as the U.S. and the Soviet Union did more than a half-century ago in the infancy of their programs — may boost a country’s stature. But John Logsden, a space policy professor emeritus at George Washington University, said Iran’s achievement should draw no concern.

“A slight monkey on a suborbital flight is nothing to get too excited about,” he said. “They already had the capability to launch warheads in their region.”

U.S. State Department spokeswoman Victoria Nuland said the U.S. had no way to confirm the monkey’s voyage, but that it was concerned by the reports because “any space launch vehicle capable of placing an object in orbit is directly relevant to the development of long-range ballistic missiles.”

In June 2010, the Security Council banned Iran from pursuing “any activity related to ballistic missiles capable of delivering nuclear weapons.”

With its ambitious aerospace program, Iran has said it wants to become a technological leader for the Islamic world.

It’s not the first time Iran has announced it had rocketed a live creature out of the Earth’s atmosphere. The country sent a mouse, a turtle and some worms into space in 2010, officials said.

But the purported successful voyage of the small monkey, shown wearing a protective vest, put Iran among just a handful of nations that have sent a primate into space in a mission seen as a precursor of human spaceflight. No name was given for the monkey.

Earlier this month, the director of Iran’s space agency, Hamid Fazeli, said Iran wanted to launch its first manned space mission in as soon as five years — a goal that stretches back to the shah’s fascination with NASA years before the 1979 Islamic Revolution.

Iran’s rocket technology alarms the West as giving it intercontinental reach for a possible arsenal. Already, conventional Iranian missiles are capable of reaching Israel and U.S. military bases in the Persian Gulf.