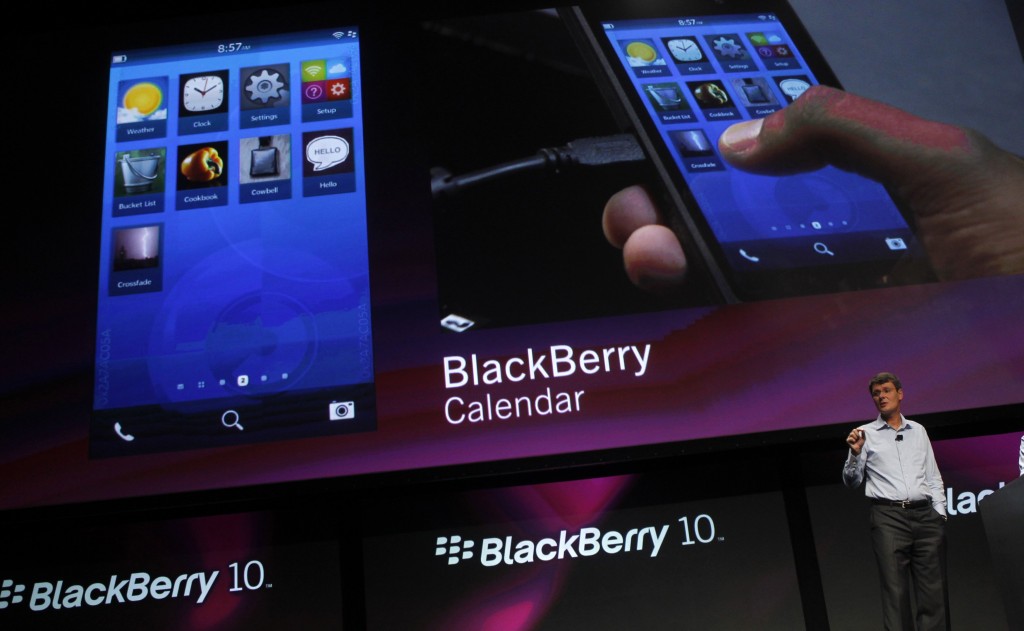 The maker of the BlackBerry smartphone is promising a speedier device, a superb typing experience and the ability to keep work and personal identities separate on the same phone. It’s the fruit of a crucial, long-overdue makeover for the Canadian company.

Thorsten Heins, chief executive of Research In Motion Ltd. (RIM), will show off the first phone with the new BlackBerry 10 system in New York on Wednesday. A marketing campaign will accompany the long-anticipated debut. Repeated delays have left the once-pioneering BlackBerry an afterthought in the shadow of Apple’s trend-setting iPhone and Google’s Android-driven devices.

Now, there’s some optimism. Previews of the software have gotten favorable reviews on blogs. Financial analysts are starting to see some slight room for a comeback. RIM’s stock has nearly tripled to $16.18 from a nine-year low in September, though it’s still nearly 90 percent below its 2008 peak of $147.

Most analysts consider a BlackBerry 10 success to be crucial for the company’s long-term viability.

“The old models are becoming obsolete quickly,” BGC Financial analyst Colin Gillis said. “There is still a big user base but it’s going to rotate off. The question is: where do they rotate to?”

The BlackBerry, pioneered in 1999, has been the dominant smartphone for on-the-go business people. Corporate information-technology managers like the phones because they’re relatively secure and easy to manage. Many employees loved them because of physical keyboards that were easier to type on than the touch-screen iPhone. President Barack Obama couldn’t bear to part with it when he took office.

The BlackBerry began to cross over to consumers. But when the iPhone came out in 2007, it showed that phones could be used for much more than email and phone calls. They could play games, music and other things. Android came along to offer even more choices. Though IT managers still love BlackBerrys, employees were bringing their own devices to the workplace – a trend Heins acknowledged RIM was slow to adapt to.

Even as BlackBerry sales continued to grow in many parts of the world, many BlackBerry users in North America switched to iPhones and Android devices. BlackBerry’s worldwide subscriber based peaked at 80 million in the quarter that ended Sept. 1, before dropping to 79 million in the most-recent quarter. In the U.S., according to research firm IDC, shipments of BlackBerry phones plummeted from 46 percent of the market in 2008 to 2 percent in 2012. Most phones in use today are either iPhones or Android devices.

RIM promised a new system to catch up, using technology it acquired through its 2010 purchase of QNX Software Systems. RIM initially said BlackBerry 10 would arrive by early 2012, but then the company changed that to late 2012. A few months later, that date was pushed further, to early 2013, missing the lucrative holiday season. The holdup helped wipe out more than $70 billion in shareholder wealth and 5,000 jobs.

Although executives have been providing a glimpse at some of BlackBerry 10’s new features for months, Heins will finally showcase a complete system at Wednesday’s event. Devices will go on sale soon after that. Prices have not yet been announced.

“Historically there have been areas that have not been our strongest points,” Rick Costanzo, RIM’s executive vice president of global sales, said in an interview. “Not only have we caught up, but we may even be better than some of the competition now.”

Costanzo said, “No one else can touch” what RIM’s new system offers.

The new operating system promises better multitasking than either the iPhone or Android. Simply swipe a finger across the phone’s display screen to switch to another program.

All emails and notifications from various applications go to the BlackBerry Hub, a nerve center accessible with a finger swipe even if you have another application open. One can peek into it and open an email, or return to the previous application without opening the email.

“You are not going in and out of applications; you’re flowing through applications with one simple gesture of your finger,” Costanzo said. “You can leave applications running. You can effortlessly flow between them. So that’s completely unique to us.”

That said, multitasking will still be limited. If you’re watching a video, it will still run while you check for email. But it will pause if you decide to open an email, and resume when you are done.

The BlackBerry’s touch-screen keyboard promises to learn a user’s writing style and suggest words and phrases to complete, going beyond typo corrections offered by rivals. See the one you want, and flick it up to the message area. Costanzo said, “BlackBerry offers the best keyboard, period.”

Gus Papageorgiou, a Scotiabank financial analyst who has tried it out, agreed with that assessment and said the keyboard even learns and adjusts to your thumb placements.

The first BlackBerry 10 phone will have only a touch screen. RIM has said it will release a version with a physical keyboard soon after that. That’s an area RIM has excelled at, and it’s one reason many BlackBerry users have remained loyal despite temptations to switch.

Another distinguishing feature will be the BlackBerry Balance, which allows two personas on the same device. Businesses can keep their data secure without forcing employees to get a second device for personal use. For instance, IT managers can prevent personal apps from running inside corporate firewalls, but those managers won’t have access to personal data on the device.

With Balance, “you can just switch from work to personal mode,” Papageorgiou said. “I think that is something that will attract a lot of people.”

RIM is also claiming that the BlackBerry 10’s browser will be speedy, even faster than browsers for laptop and desktop computers. According to Papageorgiou, early, independent tests between the BlackBerry 10 and the iPhone support that claim.

Regardless of BlackBerry 10’s advances, though, the new system will face a key shortcoming: it won’t have as many apps written by outside companies and individuals as the iPhone and Android. RIM has said it plans to launch BlackBerry 10 with more than 70,000 apps, including those developed for RIM’s PlayBook tablet, first released in 2011. Even so, that’s just a tenth of what the iPhone and Android offer.

Like many analysts, Papageorgiou recently upgraded RIM’s stock, but cautioned that longtime BlackBerry users will have to get used to a whole new operating system.

He said RIM can be successful if about a third of current subscribers upgrade and if the company can get 4 million new users overseas, especially in countries where the BlackBerry has remained popular. IDC said smartphone shipments grew 44 percent in 2012. If those trends continue, it will be possible for the BlackBerry to grow even if iPhone and Android users don’t switch.

“This doesn’t have to be the best smartphone on the planet to be a success for RIM,” he said. “I think the big question though is, if it fails, is it just too late? Are the other two ecosystems just so advanced that no one can catch up? That’s a big risk.”