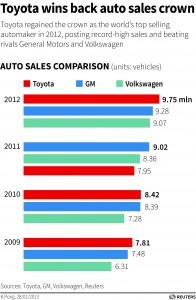 TORONTO (AP) – The maker of the BlackBerry smartphone is promising a speedier device, a superb typing experience and the ability to keep work and personal identities separate on the same phone. It’s the fruit of a crucial, long-overdue makeover for the Canadian company.

Thorsten Heins, chief executive of Research In Motion Ltd., will show off the first phone with the new BlackBerry 10 system in New York on Wednesday. A marketing campaign will accompany the long-anticipated debut. Repeated delays have left the once-pioneering BlackBerry an afterthought in the shadow of Apple’s trend-setting iPhone and Google’s Android-driven devices.

Now, there’s some optimism. Previews of the software have gotten favorable reviews. Financial analysts are starting to see some slight room for a comeback. RIM’s stock has nearly tripled to $16.18 from a nine-year low in September, though it’s still nearly 90 percent below its 2008 peak of $147.

The struggling department store chain this week will begin adding back some of the hundreds of sales it ditched last year in hopes of luring shoppers who were turned off when the discounts disappeared, CEO Ron Johnson told The Associated Press.

Penney also plans to add price tags or signs for more than half of its merchandise to show customers how much they’re saving by shopping at the chain — a strategy used by a few other retailers. For store-branded items such as Arizona, Penney will show comparison prices from competitors.

The moves are a reversal for Penney on the eve of the one-year anniversary when it pledged to almost completely get rid of the sales that Americans covet but that cut into a store’s profits. The idea was to offer everyday low prices that customers could count on rather than the nearly 600 fleeting discounts, coupons and sales it once offered.

Toyota Motor Corp. released its tally for global vehicle sales for last year Monday at a record 9.748 million vehicles — a bigger number than the estimate it gave last month of about 9.7 million vehicles.

GM had been the top-selling automaker for more than seven decades before losing the title to Toyota in 2008.

TOKYO (AP) — The joint U.S. and Japanese investigation into the Boeing 787’s battery problems has shifted from the battery-maker to the manufacturer of a monitoring system.

Japan transport ministry official Shigeru Takano said Monday the probe into battery-maker GS Yuasa was over for now, as no evidence was found it was the source of the problems.

Ministry officials said they will inspect Kanto Aircraft Instrument Co. on Monday as part of the ongoing investigation. It makes a system that monitors voltage, charging and temperature of the lithium-ion batteries.

NEW YORK (AP) — Barnes & Noble plans to continue to shrink its store base.

The head of Barnes & Noble’s retail group, Mitchel Klipper, said in an interview published Monday in The Wall Street Journal that the company will have 450 to 500 stores in a decade. That’s down from about 689 currently.

Klipper said the chain plans to close about 20 stores a year over the period.

The largest traditional U.S. bookstore has been facing tough competition from online retailers and discounters.

This article appeared in print on page 9 of the January 29th, 2013 edition of Hamodia.