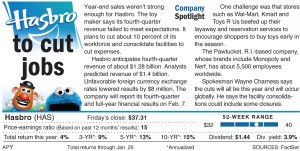 From the Start, Dreamliner Jet Program Was Rushed

NEW YORK (AP) – The 787 Dreamliner was born in a moment of desperation.

It was 2003 and Boeing, the company that defined modern air travel, had just lost its title as the world’s largest plane manufacturer to European rival Airbus. Its CEO had resigned in a defense-contract scandal. And its stock had plunged to the lowest price in a decade.

Two years after the 9/11 terrorist attacks, financially troubled airlines were reluctant to buy new planes. Boeing needed something revolutionary to win back customers.

Salvation had a code name: Yellowstone.

It was a plane that promised to be lighter and more technologically advanced than any other. Half of it would be built with new plastics instead of aluminum. The cabin would be more comfortable for passengers, and airlines could cut their fuel bills by 20 percent.

But once production started, the gap between vision and reality quickly widened. The jet that was eventually dubbed the Dreamliner became plagued by manufacturing delays, cost overruns and sinking worker morale.

DAVOS, Switzerland (AP) – Is the euro crisis over? A leading U.S. economist says not by a long shot.

Even as the head of the European Central Bank talked Friday of “positive contagion” in the markets and predicted an economic recovery for the recession-hit eurozone later this year, economist Barry Eichengreen warned that the debt crisis that has shaken Europe to its core could easily erupt again this year unless European leaders move faster to solve their problems.

While European governments and markets have been breathing easier in recent months after years of turmoil, it’s no time for complacency, said Eichengreen, who has chronicled the Great Depression and explored the consequences of a breakup of the euro currency used by 17 nations.

U.S. New-Home Sales Fell In December, Sales for Year Up

WASHINGTON (AP) – Sales of new U.S. homes cooled off in December compared with November, but for the entire year they were the best since 2009.

The Commerce Department said Friday that new-home sales fell 7.3 percent last month to a seasonally adjusted annual rate of 369,000. That’s down from November’s rate of 398,000, which was the fastest in two and a half years.

For the year, sales rose nearly 20 percent to 367,000. That’s the most since 2009, although the increase is coming off the worst year for new-home sales since the government began keeping records in 1963. Sales are still below the 700,000 level that economists consider healthy.

NEW YORK (AP) – Verizon Wireless said Friday that it’s selling space on the airwaves to AT&T Inc. in exchange for $1.9 billion and the transfer of some airwave rights from AT&T.

The sale of spectrum rights will let AT&T expand its capacity for wireless broadband in areas that include Chicago, Los Angeles, Miami, Oklahoma City and Cincinnati. In return it’s getting other frequencies in Los Angeles, Fresno, Calif., Phoenix and Portland, Ore.

The deals are part of a yearlong spectrum reshuffling process for Verizon and AT&T. AT&T is on the hunt for more spectrum, while Verizon has been optimizing its holdings to make them easier to use with wireless service.

NEW YORK (AP) – PepsiCo Inc. is removing a controversial ingredient from its Gatorade sports drink in response to customer complaints.

Molly Carter, a spokeswoman for the company, said Friday that the removal of brominated vegetable oil was in the works over the past year after the company began “hearing rumblings” from consumers about the ingredient. She said it wasn’t a reaction to a recent petition by a Mississippi teenager.

The ingredient is also used in other drinks, including some flavors of Powerade made by rival Coca-Cola Co.

The Atlanta-based company did not say whether it would remove the ingredient from Powerade but noted that it takes customer concerns into account when looking for ways to improve its drinks.

This article appeared in print on page 9 of the January 28th, 2013 edition of Hamodia.