A sharp drop in Apple’s stock pulled the Nasdaq down with it after the tech giant warned of weaker sales. Other stock-market indexes eked out slight gains.

Apple sank $63.50 to $430.50. With iPhone sales hitting a plateau and no new products to introduce, Apple said sales would likely increase just 7 percent in the current quarter. That’s a let-down for a company that has regularly posted growth rates above 50 percent.

The broad gauge of the stock market has already gained 4.8 percent this year and climbed seven days in a row.

One reason for the market’s recent rise is that some of the biggest obstacles have been pushed aside, said Brian Gendreau, a market strategist at Cetera Financial Group. On Wednesday, the House of Representatives agreed to suspend the federal government’s borrowing limit until May 19, allowing the U.S. to keep paying its bills for another four months.

“Politics is off the table for now and Europe seems like it’s stable. So what’s left? It’s earnings. And aside from Apple, it seems like pretty good news,” Gendreau said. 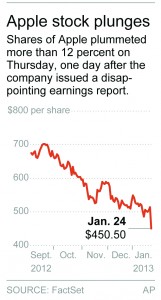 Even after its recent slump, Apple still ranks as the world’s most valuable company at $423 billion, putting it $7 billion ahead of the runner-up, Exxon Mobil.

Heading into this earnings season, many investors wondered whether shrinking sales would start to squeeze Corporate America’s profits. Judging by the results so far, few are struggling.

Of the 134 big companies in the S&P 500 that reported through Thursday morning, 85 have beaten Wall Street’s estimates, according to S&P Capital IQ.

Microsoft fell in after-hours trading after reporting that its earnings slipped 4 percent in the last quarter of 2012. Starbucks, which also reported results after the closing bell, was little changed as its revenue came in slightly below forecasts.

Netflix jumped $43.60 to $146.86, a 42-percent bounce. Analysts had expected rising costs to lead Netflix to post a loss in the last three months of 2012. But Netflix said late Wednesday that it turned a profit with the help of 2 million new subscribers.

The Labor Department reported that the number of Americans applying for unemployment aid fell last week to the lowest since January 2008. Applications dropped 5,000 to 330,000. The four-week average also hit a five-year low.

The employment report nudged prices for U.S. government bonds down, sending their yields higher. The yield on the benchmark 10-year Treasury note inched up to 1.85 percent from 1.83 percent late Wednesday.

Airline stocks were mostly higher. Despite rising fuel costs, Southwest reported better earnings than analysts had expected, thanks partially to the airline charging $8 more for the average fare. The parent company of United Airlines and Continental took a heavy quarterly loss but announced plans to cut around 600 jobs.

Among other companies reporting earnings:

n Xerox rose 17 cents to $7.75. Xerox’s net income shrank over the same period the previous year, but it still beat analysts’ estimates by a penny, helped by better revenue from its business services.