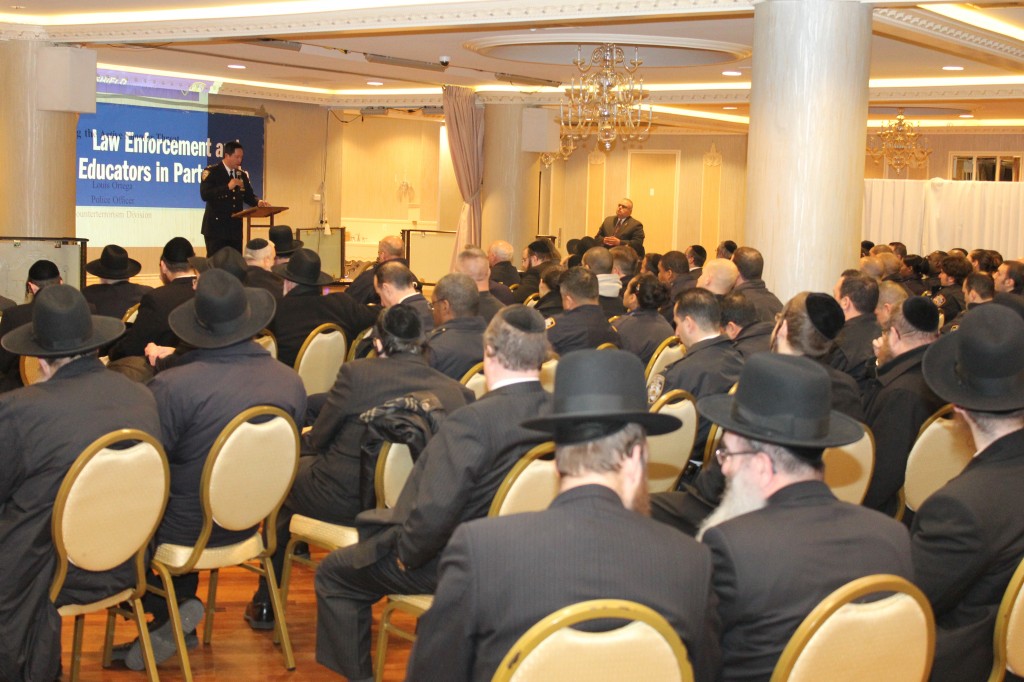 A buzzer system with an intercom and video of what is happening outside. Have a rendezvous location where students and parents can gather if anything happens. And above all, have regular drills so that students will know what to do and administration can see where they must improve.

That is the gist of the conference yesterday hosted by the New York Police Department and Misaskim and organized to help yeshivos boost their security in the wake of the Newtown massacre last month. Twenty-six people, including 20 children, were killed by a gunman in the Sandy Hook elementary school in the Connecticut city.

“This is all very low cost, but pre-planning” is important, Chief Thomas Chan, the commanding officer of Patrol Bureau Brooklyn South, told the crowd at Bais Sura school in the outskirts of Boro Park. Federal Homeland Security funding was available for yeshivos, a police official said.

Dozens of men in blue rubbed badge-heavy shoulders with dozens more men in black hats yesterday morning at the event organized by Yanky Meyer of Misaskim, a disaster preparedness meeting, at the request of Chief Chan.

Councilman David Greenfield (D-Brooklyn) echoed several of the speakers in saying that it is irresponsible to say that a school shooting cannot occur in any given place.

“The people in Newtown were certain they never had an issue,” Mr. Greenfield said. “And quite frankly they had better security than all of our yeshivos. The doors were locked, they had security guards in the buildings, and Newtown, Connecticut, was not a place that anybody was actually concerned that anything could happen, and unfortunately something horrific did happen there.

“In our case it’s the exact opposite. If you ask any expert they will tell you that we are targets. So the concern in our community is even greater than in a place like Newtown and we need to be aware of that.”

Injecting a broader context, Mr. Greenfield noted that publicly-funded busing is also a security matter for yeshivos. The New York State legislature recently agreed to fund yeshivah busing after regular public school hours in a contentious debate, but the issue will have to be renegotiated every year.

Inspector Luis Ortega of the Shield Unit, the NYPD’s counterterrorism division, showed a video presentation of how to react to a shooter in a school or business, and Ramapo Chief Peter Brower gave a short address on how he deals with security in the much less densely populated Monsey yeshivah districts.

David Pollock of the Jewish Community Relations Council of New York suggested four ways yeshivos could make themselves less of a target, starting with the call to police.

“The faster you call 911,” he said, “the faster you’ll have the cavalry come over the hill.”

Mr. Pollock said that every yeshivah needs a person with leadership abilities authorized to take charge immediately in the event of an emergency, someone tasked with calling 911, someone charged with standing at the door to direct incoming police, and drill, drill, drill.

“When you talk about evacuations, most people only know the door they came in on,” he said.

A yeshivah administrator told Hamodia yesterday that, based on the conference message, he is planning on “closing off” his yeshivah by putting turnstiles at the doors that can be accessed with a card or fingerprints, and increase the number of cameras.

Mr. Chan in his remarks described a study taken by the NYPD, in which 202 mass shooting incidents, the November 2008 Mumbai attack in particular, were scrutinized for leads on how to prevent future tragedies.

Based on that survey, he said, police have a composite image of a single male shooter with multiple weapons who plans his attack in advance with photographing and scoping the site.

“What I’m telling you is nothing new, some of it is quite often common sense,” Mr. Chan said. “But, as administrators, as teachers, as people who are charged with protecting children, it is very important that we look at this very carefully, look at our situation and see how we can prevent something like that happening in New York City.”