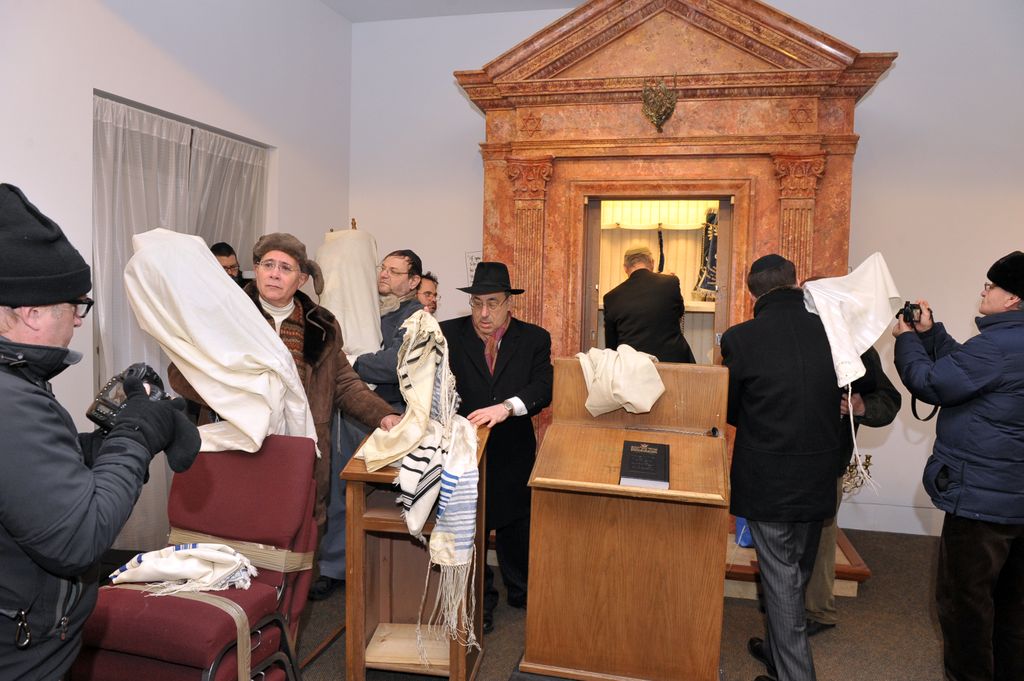 The 16th Street Synagogue closed the doors on its building at 3 West 16th Street in Manhattan on Wednesday. After losing a long legal battle with the building’s title owner, the congregation will relocate from the building that had been its home since 1945.

The owner, Mr. Jack Braha, maintains that the shul owes him back rent. “I still open the door… they can reinstate the lease and I’ll give them terms to pay back the $7.5 million … over the course of my lifetime,” he told The Real Deal, a New York City real estate news organization. Ultimately, the shul may have been caught in the middle of a falling-out that the owner had with the developer, who had made an initial agreement with the shul. “I feel bad for [the synagogue],”  the owner told The Real Deal, “but they’re chasing me instead of the people who made the deal with them.”

Community members gathered for the final Minchah at 1:40 p.m. on Wednesday. Several long-time members who have since moved away from the neighborhood also returned for this final tefillah.

Most of the furniture and sefarim had already been removed; during Minchah, workers were removing the last few bookcases from the walls. The davening concluded with the recital of Chapter 130 in Tehillim, Shir hamaalos mimaamakim.

After Minchah, the sifrei Torah were removed from the synagogue, as grown men and women openly sobbed. As the procession of sifrei Torah was led out the door for the final time, the chazzan, his voice cracking with emotion, led Tehillim 121, Esa Einai El Hehorim.

“It is a sad day for Jewish life in Lower Manhattan,” said Peter Greenspan, who davened in the shul for eight years before moving to New Jersey, but has remained a board member. “16th Street Synagogue was a special and unique shul.  It catered to the diverse population of downtown New York City who wanted to be part of a warm, intellectual and dynamic Orthodox synagogue. Marching the Torahs out today felt like a funeral, but despite losing this place of holiness I hope we can find a new home for this crucial shul to re-emerge.”

Members recalled the effect the shul has had on their lives.

“I have been in this shul for 25 years,” said its president, Richard McBee. “It is my first and only shul. I am a baal teshuvah; when I walked through those doors for the first time, I knew close to nothing. I learned all my Torah in that shul. The Rav, Rabbi Israel Wohlgelernter, (now Rabbi Emeritus) is the rabbi that I learned the most from. Many people are associated with lots of shuls, but this has been my only one.”

Mr. McBee has served as president several different times, totaling more than half of his 25 years there.

“I was there pretty much every day of the year that I was in New York City, and certainly every Shabbos and Yom Tov,” said Mr. McBee. “There was no other place for me, because it was my home. When you grow up in one home, and then [lose it], you can imagine what it feels like.

“The 16th Street Synagogue was, and always will be, a special place,” said Aaron Twersky, a 32-year old lawyer who davened there for four years, and has remained a board member even after recently moving with his wife and two children to the Five Towns. “While it was a strictly Orthodox shul, it accepted and embraced Jews from all walks of life and backgrounds, never making anyone feel insufficiently observant or learned.

“It was an oasis within the great and diverse metropolis and midbar of Manhattan. Whether it was for minyanim or shiurim, Jews from all over the world knew it, and appreciated it, for its endless warmth.

“Leaving the shul today for the very last time was devastating, crushing and joyous, all at the same time. It was sad to be leaving a mikdash mi’at that has seen so many simchos and tefillos. But, (after the long legal battle) it was a relief to be moving ahead — to have the opportunity to rebuild the shul and community and to continue serving Hashem in the way we know how.”

Despite the painful loss, the strong determination to move forward and rebuild was evident throughout.

“I feel a tremendous loss of something I built, and determination to rebuild,” said Mr. McBee.

The shul will be holding temporary minyanim in various area synagogues, as it considers its options.

While it may pursue further appeals in its legal battle to remain in 3 West 16th Street, it is continuing to look for a suitable new location. “It is difficult to find something suitable for a shul, or reasonably priced,” said Mr. McBee.

“But we have a community that needs us, so we will go on and we will rebuild, so G-d-willing the shul will continue to do what it has been doing for the 25 years that I have been here, and long before that.”