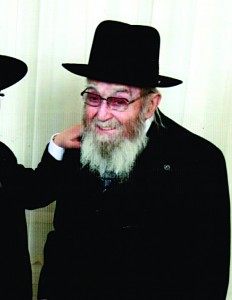 Like the legendary Johnny Appleseed, who spread apple orchards through the American frontier, Reb Shulem Mermelstein, z ”l, was a pioneer who spread seeds of chessed wherever he went.

Unlike Johnny Appleseed, Reb Shulem managed to avoid becoming a legend in his own time by keeping much of his chessed secret — even from his own children.

Every patient in Maimonides Medical Center knows about the Bikur Cholim. Few, if any, know how it started. Reb Shulem noticed that there was a Bikur Cholim room, which basically consisted of a few chairs. Realizing that people might need something to drink, he bought a refrigerator. Then, seeing the success of his drinks “business,” he decided they needed something to eat with the drinks. So he went from bakery to bakery and got donations of cake and cookies.

But what about Shabbos? Maybe someone would want some tea? So he went out and bought an urn. Then, visiting patients in the hospital, he saw a need to bring special food. So, he brought chicken soup from home. When his children asked why there was so little soup that week, Mrs. Mermelstein said that it had boiled out. Eventually, she bought a bigger pot and thermos bottles…. The rest is history.

But the history started much earlier. In Pavlova, Czechoslovakia, when Shulem was eight or nine years old, he suffered from an eye ailment that prevented him from going to cheder. There was another child he knew who came from a poor family. Often his friend had nothing to eat, but he did go to cheder. Little Shulem hit on a plan. He took food from home, but didn’t eat it. He gave the food to his starving friend. And after the other boy ate his fill, Shulem would say, “Now please tell me what you learned in cheder….”

He had whom to learn it from. When Shulem was hiding from the Nazis in the woods, he stumbled on a little hut. Suddenly, a huge gypsy appeared. “Who are you?” the gypsy demanded.

“I am Ben Zion Mermelstein’s grandson.” He  himself was not sure why he didn’t give his own name. But the gypsy turned white. He picked up the little boy, brought him into his hut and nursed him back to health. Then he explained that Shulem’s grandfather Ben Zion had been kind to him many times. And he was happy to repay the kindness.

Like a “musician’s musician” — famous only to fellow practitioners — Shulem Mermelstein’s chessed was well known by other baalei chessed, especially those involved in chessed shel emes. For 60 years he was the moving force behind the Bikur Cholim Chevrah Kaddisha and trained numerous “students” to do taharah and more with full dedication to Halachah and kvod hameis. One of his talmidim in chessed shel emes went on to create the Misaskim organization, a major source of pride for his “rebbi.”

With all the years and kevuros, Reb Shulem never became hardened. One day, his son Yitzchak, ybl”c, saw his father put down the telephone and hold his head, groaning over and over, “Oy, vey! … Oy vey!”

He pulled himself together enough to sigh, “A boy just drowned in camp. And they called for me to arrange the levayah.”

“What? What difference does it make if I knew him? A Jewish boy drowned. I shouldn’t cry?”

For Reb Shulem chessed and emes were not just when the opportunity presented itself. At 88 years old, he traveled to Eretz Yisrael for a grandson’s bris. He would only be there a few days. But he knew he would also be visiting the kever of his mentor — the Chuster Rebbe. A photograph of him at the kever shows Reb Shulem kneeling down, by the opening of the alcove at the side of the kever. What the photo can’t show is that to prepare for the trip, Reb Shulem planned out what he would need to do. And he packed rubber gloves and plastic bags so he could clean out the old candles….

The Boy Scouts could have taken their motto “Be Prepared” from Reb Shulem — like the time he visited a summer camp and asked the boys if they would like to go on a hike. The then-75-year-old trailblazer took the boys on a walk through the woods. And all the while, he gathered special Y-shaped twigs. The twigs would be set aside to be used in keeping with the minhag to place them in the hands of niftarim before burial.

Reb Shulem went to the olam ha’emes with a great deal more than twigs in his hands.

This article appeared in print on page D17 of the January 23rd, 2013 edition of Hamodia.