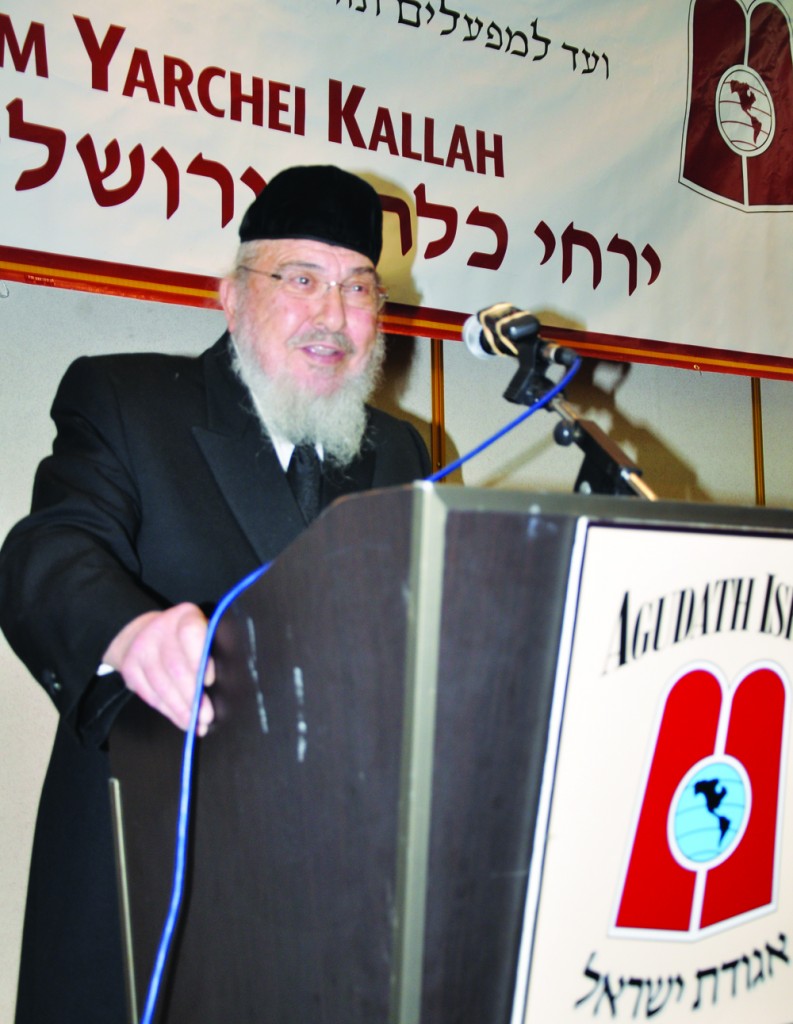 Acharon acharon chaviv — day four of Agudas Yisrael’s Yerushalayim Yarchei Kallah got off to a solid start with a packed beis medrash full of lomdim who were clearly at home, both with the sugyos and in the sevivah. The avira d’machkim of Eretz Yisrael, the impromptu beis medrash and the 347-page sefer containing all possible marei mekomos, meticulously indexed, have really made this experience a delight.

The first shiur of the day was delivered by the renowned mechaber of the popular sefer Orchos HaShabbos, Harav Sholom Gelber. This fascinating shiur halachah expertly defined the interplay of various aspects of the sugya d’kallah, focusing on the use of digital water meters on Shabbos, which have recently come into popular use. He explained the differences among the various opinions, casting a bright light on this important topic.

Next came a seder hachanah in which the lomdim readied themselves for the first iyun shiur of the day, to be delivered by renowned maggid shiur Harav Baruch Mordechai Ezrachi, Rosh Yeshivas Ateres Yisrael. The anticipation was palpable as the Rosh Yeshivah made his way through the beis medrash and took his place behind the shtender to begin his shiur.

With his trademark air of authority, Harav Ezrachi delivered a fiery shiur, leading participants methodically through the Gemara, Rishonim and Acharonim on the sugya of gerama b’meleches Shabbos. He highlighted the difference between the chiyuv of nezikin and the chiyuv of meleches Shabbos. Whereas in nezikin the focal issue is the amount of damage caused, not the action which brought about the damage, in hilchos Shabbos the emphasis is on the action that brought about the meleches Shabbos, not necessarily its outcome. He touched on complex chiddushim of Rav Chaim Ozer and the Chazon Ish and concluded with his own perspective on the sugya.

Although the allotted time for the shiur had long passed, the participants were clearly not finished. Several dozen engaged Harav Ezrachi in further discussion on the sugya after Minchah, until he had to leave for shiur in his own yeshivah.

On Thursday afternoon, the final seder of this year’s 13th Yerushalayim Yarchei Kallah, participants channeled all their energy into preparing for the final shiurim of Harav Dovid Feinstein, Rosh Yeshivas Beis Yehuda, and Harav Avraham Direnfeld, Rosh Kollel of Belz.

The penultimate shiur was given by Harav Direnfeld, who delivered an incredibly clear halachic analysis of the sugyos d’kallah.

Harav Dovid Feinstein electrified everyone in the beis medrash with his intense analysis of the various chilukim in the sugya of davar she’ein miskaven and mis’asek. The intensity with which the sevarah animated the Rav’s entire being was a lesson in the reses v’zei’a that Chazal prescribe as the appropriate mindset for learning Torah.

He concluded with equally fiery words of mussar on the importance of kevius itim laTorah, chinuch habanim and the importance of honesty in our business dealings. He then spoke passionately about the troubling spiritual crisis threatening to engulf chareidi Jewry — the drafting of bnei Torah, which poses an existential threat to the beis medrash.

The concluding address, which contained profound and inspiring divrei machshavah, was given by Harav Moshe Chodosh, Rosh Yeshivah of Yeshivas Ohr Elchanan. He stated that in order to preserve the lofty feelings generated by the week’s learning, each participant should make a kabbalah — a simple one that he is confident he will be able to keep.

The women’s program included a lively shiur given by Rabbi Mordechai Neugroschel, followed by a fascinating tour of important sites including the new Kosel tunnel and archeological digs.

With mixed emotions of joy and sorrow — joy in the precious, unique kinyan haTorah made in the company of true mevakshim, in the inspiring presence of Gedolei Roshei Yeshivah and Gedolei Poskim, and sadness at the ending of this lofty experience — the 13th Yerushalayim Yarchei Kallah drew to a close. At a farewell seudah sponsored by Agudas Yisrael of America, the lomdim took leave of each other, lending new meaning to Chazal’s statement “L’olam al yipared adam meichaveiro ela mitoch dvar halachah.”

We can truly say that in the hearts and minds of all the participants was the fervent hope “L’shanah haba b’Yerushalayim habenuyah.”

As the 13th Yerushalayim Yarchei Kallah drew to a close, Rabbi Labish Becker, executive director of Agudas Yisrael of America, noted how the annual event had gotten its start.
It was the height of the second intifada, and the Yidden of America very much wanted to do something to help their brothers and sisters under siege. Agudas Yisrael worked on organizing a trip to show support for the Yidden there. They asked Harav Aron Leib Steinman what they should do during the visit.
He answered unequivocally, “Torah magneh u’matzleh — the learning of Torah protects and shields Klal Yisrael. Come to Eretz Yisrael and sit and learn with great hasmadah. That is the best thing you can do for the Jewish people.”
And so they did.
Previous Next