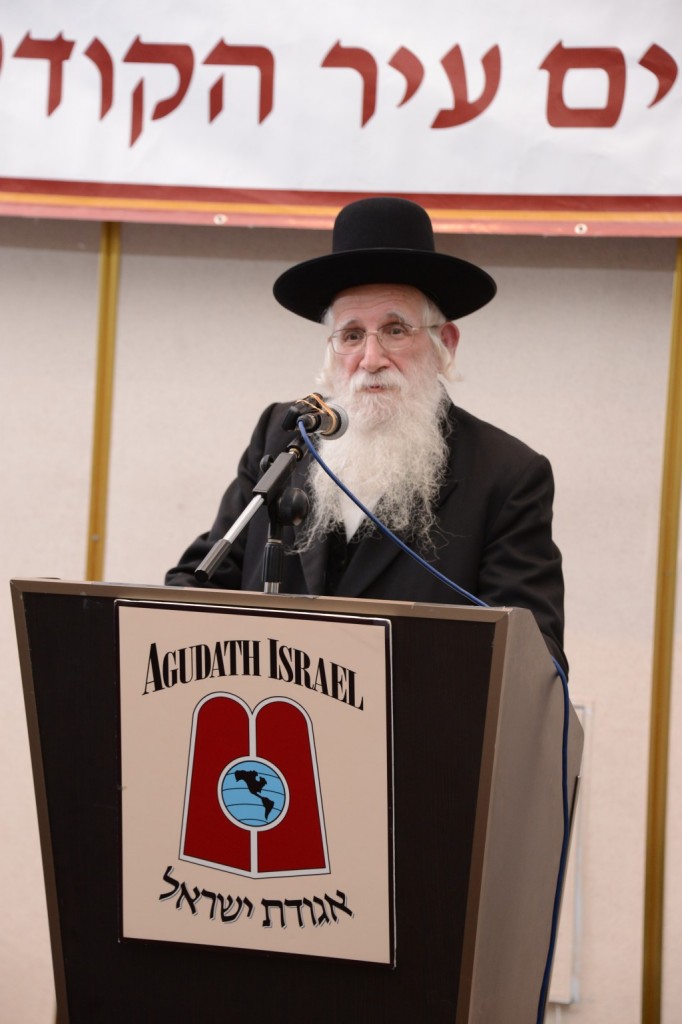 “These sugyos are really becoming clear,” said one participant to another, their voices barely audible over the thundering kol Torah as day three of Agudas Yisrael’s Yarchei Kallah in Yerushalayim got off to an energetic start.

Indeed, the beis medrash has almost never been quiet; while the sound of the learning is animated during the sedarim, there’s really no bein hasedarim.  For many, the day’s learning began with Harav Meir Zvi Spitzer’s lively Daf Yomi shiur at 6:30 a.m. Everyone is trying to chap arein as much as possible. The participants are clearly in their element.

With a keen sense, one can detect an undercurrent of urgency. Although the participants may feel at home, they simply can’t allow themselves to forget that tomorrow is the last day of the Yarchei Kallah — hayom kotzor v’hamelachah meruba…

Clearly apparent, was the eager anticipation that soon, one of the generation’s leading poskim— a moreh hora’ah and maggid in one, Harav Yitzchak Zilberstein, Rav of Ramat Elchanan, Bnei Brak, a most prolific author of so many popular sefarim, would soon grace the Yarchei Kallah with his presence and deliver a shiur b’halachah.

Exuding warmth and addressing the lomdim with his trademark greeting “mein teiyere brieder,” Harav Zilberstein utilized his unique style to lead the mishtatfim on a scenic tour of halachic she’eilos (see sidebar). The lomdim were challenged to resolve multifaceted halachic issues that covered disparate topics ranging from hilchos aveidah, tzedakah, and finally a multifaceted familial inheritance dispute that took place, involving complexities of kibbud av va’eim and much more. With true, eye-opening stories, the Rav shared profound lessons in halachah and revealed new insights into the realm of a world-class posek. Concluding his two-hour shiur, Harav Silberstein shared with the lomdim some previously unknown stories depicting the greatness of his late father- and mother-in-law, Hagaon Harav Yosef Sholom Elyashiv, zt”l, and Rebbetzin Elyashiv, a”h, and a very moving story told over by his grandfather Harav Aryeh Levin, zt”l.

While a few dozen participants continued to engage Harav Zilberstein in heated conversation, others got right back to their avodas hakodesh, learning the sugya, trying to prepare as much as possible for the iyun shiur to be given by Harav Baruch Dov Povarsky, Rosh Yeshivah, Ponovezh.

The lomdim got a well-deserved short break after Minchah, although many of them kept on learning without interruption. In fact, this year’s attendance of both Rabbi Shlomo Gottesman’s hachanah shiur during morning seder and Rabbi Shlomo Cynamon’s chazarah shiur during bein hasedarim has been larger than ever before.

By now, most feel at home in the sugya d’Kallah, and the questions are getting sharper. There’s a true sense of accomplishment, albeit mitigated by the knowledge that the Yarchei Kallah has just passed the half-way point.

The evening program was dedicated l’zecher nishmas the senior Posek Hador Harav Yosef Shalom Elyashiv. A siyum maseches was organized involving many of the Yarchei Kallah participants to mark this evening’s hazkarah.

Stirring hespedim were given by Harav Moshe Shapira and Harav Ezriel Auerbach, another son-in-law of Harav Elyashiv. Their message of chizuk and mussar touched the hearts of all present at this very special ma’amad of kvod haTorah. The attendees of the seudas mitzvah were then addressed by Harav Yosef Efrati, a talmid muvhak of Harav Eliyashiv and Harav Avrohom Tzvi Yisraelzon, a grandson of Harav Elyashiv, who conducted the siyum.

The women participants enjoyed a fullday tour to Tzfas and the Golan Heights, stopping at several interesting sights, including an ancient shul in the area.

After the siyum and seudah, a number of participants went right back to learning in the beis medrash until late at night. The work before them was formidable; just reviewing the shiurim will certainly keep them occupied for the near future, but the next day’s schedule of two iyun shiurim, to be given by Harav Baruch Mordechai Ezrachi, shlita, and Harav Dovid Feinstein, shlita, both of them towering figures whose mere presence inspires awe — was enough to remind them that Mi shetarach b’Erev Shabbos yochal b’Shabbos.

Upon finding themselves stuck at a railroad crossing, hearing the sounds of the oncoming locomotive in the distance; the family made a quick decision to exit their car. A brave bystander leapt into the car and with milliseconds to spare managed to restart it  and drive off the tracks, thus preventing a scene of destruction and carnage. The next time the car owner and his rescuer met was in beis din to decide who was the present owner of this “saved” car.

What are the guidelines of matzil min ha’ari and zuto shel yam?

What guidance does the Torah give us to render a psak in this case?

Does the Torah provide any remuneration for the hero of this case?

For the answer to this and many other questions, all are invited to listen to the recording of this shiur.