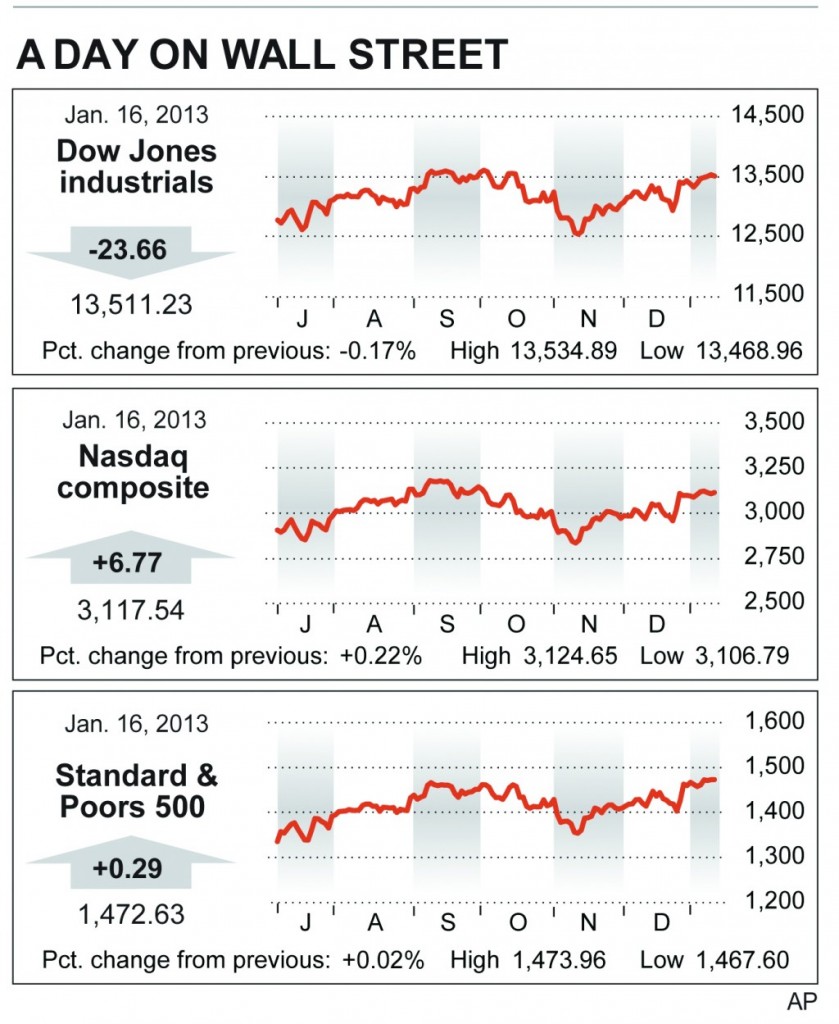 Japan’s two biggest airlines grounded all their Boeing 787s for safety checks Wednesday after one was forced to make an emergency landing. The plane, known as the Dreamliner, has been plagued by a series of problems this year, including a battery fire and fuel leaks. Boeing’s stock sank $2.60 to $74.34, a loss of 3 percent.

Apple rose $20.17 to $506.09, ending a three-day slide. The world’s largest publicly traded company closed below $500 on Tuesday for the first time in nearly a year. Concerns that the popularity of its iPhone is waning have pushed Apple’s stock down 5 percent this month.

“Their earnings are just ridiculously good,” Clark said. “It shows you that these giants can make money in any type of environment.”

JPMorgan Chase gained 47 cents to $46.82. The bank’s stunning results were offset by an internal review of a $6 billion trading loss on credit derivatives. JPMorgan’s board of directors criticized executives for failing to keep the board informed of potential problems and using unapproved models for measuring trading risks.

Goldman Sachs gained $5.50 to $141.09, a 4 percent jump. The investment bank’s profits nearly tripled in the fourth quarter of last year. Goldman’s bond underwriting business had its best year since the financial crisis, thanks to strong demand for fixed-income investments and firms lining up to borrow at historically cheap rates.

Analysts forecast that companies in the S&P 500 will report a 3.2 percent increase in fourth-quarter earnings. Financial firms and consumer-discretionary companies are expected to post the biggest growth, according to S&P Capital IQ.

The report led traders to push up prices for Treasurys, knocking yields down. The 10-year Treasury note’s yield slipped to 1.82 percent. The yield, used to set mortgages and a wide variety of other loans, ended Tuesday at 1.84 percent.

Among other companies making news: