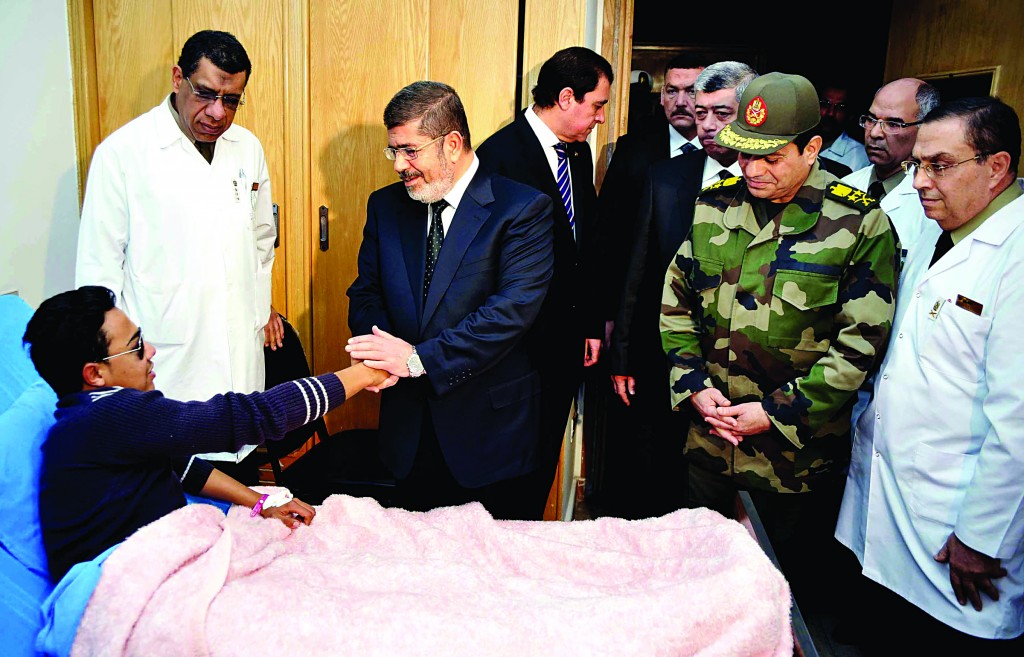 The Obama administration on Tuesday gave a blistering review of remarks that Egyptian President Mohammed Morsi made almost three years ago about Jews and called for him to repudiate what it called unacceptable rhetoric.

In blunt comments, the White House and State Department said Morsi’s statements were “deeply offensive” and ran counter to the goal of peace in the region. The State Department, noting that a senior congressional delegation is now visiting Egypt, said the remarks complicated efforts to provide economic and military aid to Egypt.

“We believe that President Morsi should make clear that he respects people of all faiths and that this type of rhetoric is unacceptable in a democratic Egypt,” White House spokesman Jay Carney told reporters.

Morsi was a leader in the Muslim Brotherhood in 2010 when, according to video broadcast last week on Egyptian media he asked Egyptians to “nurse our children and our grandchildren on hatred.” Months later, in an interview, Morsi referred to Zionists as bloodsuckers who attack Palestinians, describing Zionists as “the descendants of apes and pigs.”

“We completely reject these statements as we do any language that espouses religious hatred,” State Department spokeswoman Victoria Nuland told reporters. “This kind of rhetoric has been used in this region for far too long. It’s counter to the goals of peace.”

Morsi’s remarks and the Obama administration’s rebuke marked a new point of tension in the complex relationship between the U.S. and Egypt’s fledgling democracy.

Since being elected in June of 2012 in the aftermath of the revolution that ousted former President Hosni Mubarak, Morsi has promised to abide by Egypt’s decades-old peace treaty with Israel. Morsi was also instrumental in facilitating a cease-fire in November between Israel and Hamas leaders in the Gaza Strip, despite his refusal to speak directly with Israeli officials.

The White House and State Department did acknowledge Morsi’s willingness during that crisis to work with the U.S. toward mutual goals, and said Egypt’s continuing commitment to its peace treaty with Israel is essential for U.S. relations with Egypt.

Egypt receives more than $1 billion a year in military and development aid from the U.S. as part of a package linked to its historic 1979 peace deal with Israel. The peace accord is a cornerstone of U.S. Mideast policy.

Nuland said Morsi’s actions as president in support of the peace treaty with Israel are laudable but only one part of picture.

An official in Israel, speaking on condition of anonymity because he was not authorized to speak publicly about an issue of such sensitivity, said the comments were a “big concern” but that Israel did not want to fuel tensions with Egypt.

The two sets of comments were first reported on Tuesday by The New York Times.

A Muslim Brotherhood official in Egypt reached by The Associated Press refused to comment on Washington’s reaction to Morsi’s remark.

The silence reflected the deep sensitivity of the issue for Morsi and the Brotherhood, which is fiercely anti-Israeli and anti-U.S.