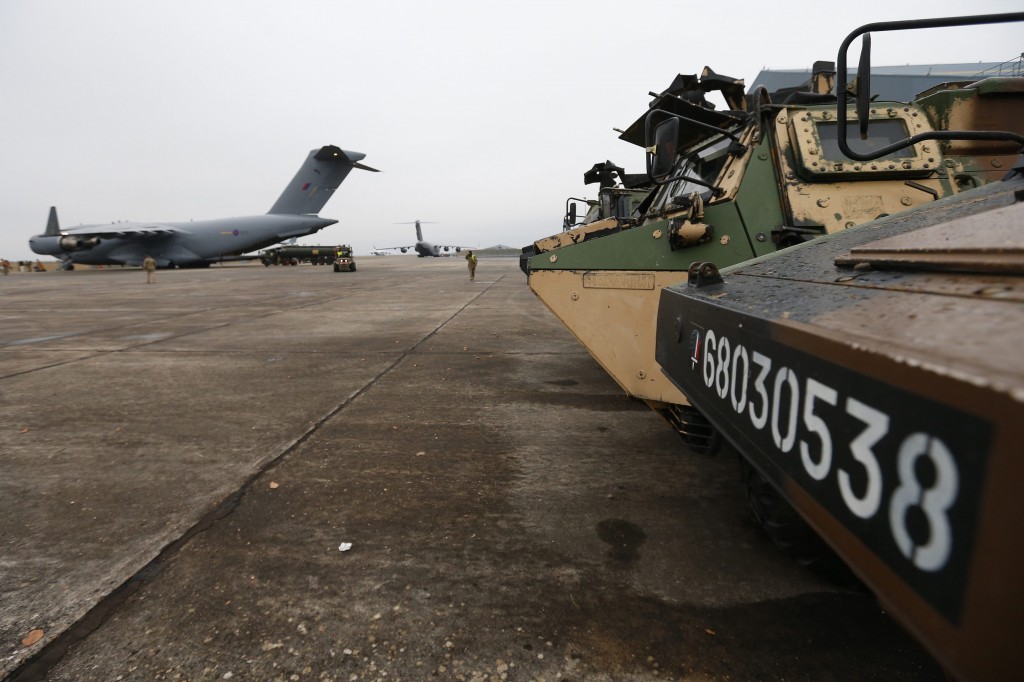 Despite a punishing aerial bombardment by French warplanes, al-Qaida-linked terrorists grabbed more territory in Mali on Monday, seizing a strategic military camp that brought them far closer to the government’s seat of power.

Declaring France had “opened the gates of hell” with its assault, the rebels threatened retribution.

“France … has fallen into a trap much more dangerous than Iraq, Afghanistan or Somalia,” declared Omar Ould Hamaha, a leader of the Movement for Oneness and Jihad in West Africa, one of the rebel groups controlling the north, speaking on French radio Europe 1.

French fighter jets have been pummeling the insurgents’ desert stronghold in the north since Friday, determined to shatter the Islamist domination of a region many fear could become a launch pad for terrorist attacks on the West and a base for coordination with al-Qaida in Yemen, Somalia and Pakistan.

The French Embassy in Bamako immediately ordered the evacuation of the roughly 60 French nationals in the Segou region, said a French citizen who insisted on anonymity out of fear for her safety.

France expanded its aerial bombing campaign, launching airstrikes for the first time in central Mali to combat the new threat. But the intense assault, including raids by gunship helicopters and Mirage fighter jets, failed to halt the advance of the rebels, who were only 250 miles from the capital, Bamako, in the far south. 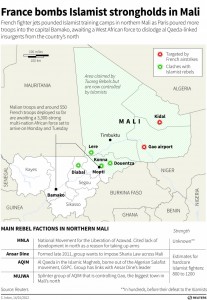 The rebels “took Diabaly after fierce fighting and resistance from the Malian army, that couldn’t hold them back,” said Le Drian, the French defense minister.

Mali’s military is in disarray and has let many towns fall with barely a shot fired since the insurgency in the West African nation began almost a year ago. While the al-Qaida-linked extremists control the north, they had been blocked in the narrow central part of the landlocked nation.

They appear to have now done a flanking move, opening a second front in the broad southern section of the country, knifing in from the west on government forces.

In response to the insurgent advances, Mauritania, which lies to the northwest of Mali, put its military on high alert. To the south, the nation of Burkina Faso sent military reinforcements to its border and set up roadblocks. Even Algeria, which had earlier argued against a military intervention, was helping France by opening its air space to French Rafale jets.

Mali’s north, an area the size of France, was occupied by al-Qaida-linked rebels last April following a coup in the capital. For nearly as long, the international community has debated what to do, with most foreign powers backing a U.N. Security Council resolution in December that called for training the Malian armed forces before any military intervention was launched. Diplomats said no intervention could happen before September.

All that changed in a matter of hours last week, when French intelligence services spotted two rebel convoys heading south, one on the mostly east-west axis of Douentza to the garrison towns of Mopti and Sevare, and a second heading from a locality north of Diabaly toward Segou.

If either Segou or Mopti were to fall, many feared the Islamists could advance toward the capital.

French President Francois Hollande authorized the airstrikes, which began Friday, initially concentrated in the north. France has sent in Mirage jets stationed in Chad that can carry 550-pound bombs.

U.S. Defense Secretary Leon Panetta said Monday that the United States has “a responsibility to go after al-Qaida wherever they are,” including Mali, adding that the U.S. is already providing intelligence-gathering assistance to the French in their assault on Islamist extremists.

Besides France and the U.S., 11 other nations have pledged troops or logistical support. Britain over the weekend authorized sending several C-17 transport planes to help France bring more troops.