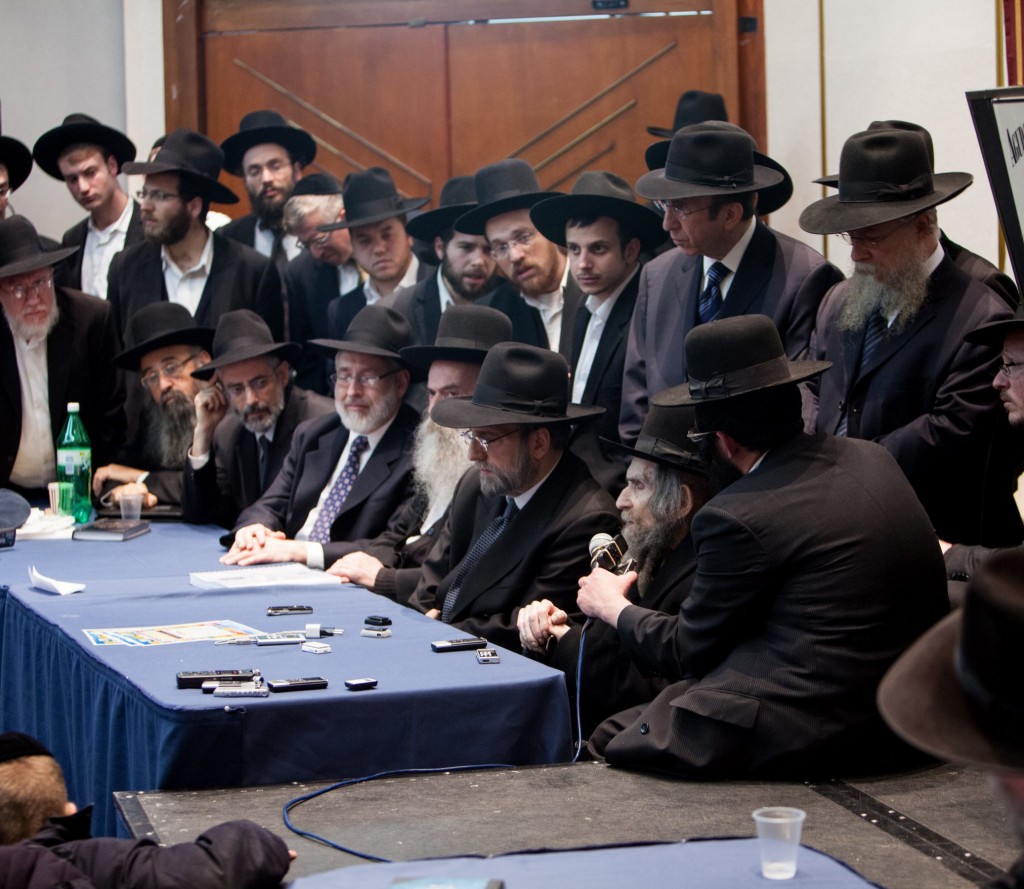 Today they’re not pursuing the roles of physicians, attorneys, accountants or businessmen. For this week they are bnei yeshivah, fully engrossed in the sugya d’kallah and if you want to put that to the test, just call any of their offices and see what response you’ll receive! Sounds like a dream? Well, it’s a reality for a few hundred commited professionals, mostly from America and Canada, some from Europe and Eretz Yisrael, who’ve come together at the Ramada Hotel in Yerushalayim to turn its central ballroom into a beis medrash l’chol davar. This is now the 13th year that Agudas Yisroel of America’s Torah Projects Commission is arranging this Yarchei Kallah.

More than 200 men are earnestly trying to fulfill the Chazal of total immersion in the Ohela shel Torah. The vibrancy in the air at the “Yarchei Kallah Beis Medrash” is ample testimony to this. The lomdim have put all their mila d’alma on the back burner, focusing their attention to the svaros of meleches machsheves, davar she’eino miskaven and p’sik reisha with palpable ris’cha d’Oraisa.

From late last night through early this morning, participants filed into the hotel lobby, some of them clearly jetlagged. Nevertheless, there was an atmosphere of simchah and eager anticipation as every participant  began this unique four-day Torah experience,  immediately getting down to “the business of the day” — limud b’hasmadah.

The kol Torah resounded throughout the Yarchei Kallah beis hamedrash as it does in the most prominent yeshivos.

After a three-hour seder, participants were treated to divrei pesichah from Harav Pinchas Friedman, Rosh Kollelim, Belz. He began his shiur by proclaiming: “You, the participants of the Yarchei Kallah, are the shlichim of Klal Yisrael!” He implored the lomdim to treasure and make good use of every minute of Shabbos Kodesh. Klal Yisrael is unique amongst the nations in that Shabbos Kodesh, our day of rest, is a day that we have the opportunity to elevate even the most mundane to levels of kedushah.

Thereafter began this year’s shiur hakdamah given for the 13th consecutive year by Harav Asher Weiss, Av Beis Din Darchei Hora’ah and Rosh Yeshivah, Darchei Torah, who offered stirring words of chizuk for the attendees. Harav Weiss then clearly and cogently explained the sugya of meleches machsheves, davar she’eino miskaven and p’sik reisha. With his trademark elucidation, he led the participants on a fascinating tour of the sugya, highlighting and expounding on enlightening new concepts and vistas in the sugya d’kallah.

While the men were engrossed in the sugya, the women were treated to an insightful shiur by Rebbetzin Rina Tarshish, followed by a trip to Kever Rochel.

The evening program began with divrei chizuk v’hisorerus from Harav Yitzchak Scheiner, Rosh Yeshivah, Yeshivas Kamenetz. Rav Scheiner opened his remarks by stating: “Surely you have made the effort to travel over 6,000 miles for this Yarchei Kallah in order to shed some of the excesses of Chutz La’aretz and acquire untainted ruchniyus from the avira d’Eretz Yisrael. He encouraged the lomdim to strengthen their observance of shmiras haloshon and ona’as devarim, hurtful speech, mentioning the importance of greeting one another with genuine simchah.

This was followed by a very inspiring drashah from Harav Moshe Hillel Hirsch, Rosh Yeshivah, Yeshivas Slabodka. He quoted his Rebbe, Harav Aharon Kotler, zt”l, with the message, “Every Yid must continuously strive to achieve greater heights in ruchniyus”.

As the evening progressed, the beis medrash was brimming with anticipation as people vied for a place to see Harav Aharon Leib Steinman, shlita, as he regally entered. (see sidebar). Despite the overflow crowd, the atmosphere of awe and chardas hakavod was evident as one of the foremost of our Gedolei Hador entered the room.