Business Why Boeing’s 787, The Dreamliner, Is Under Review
Business 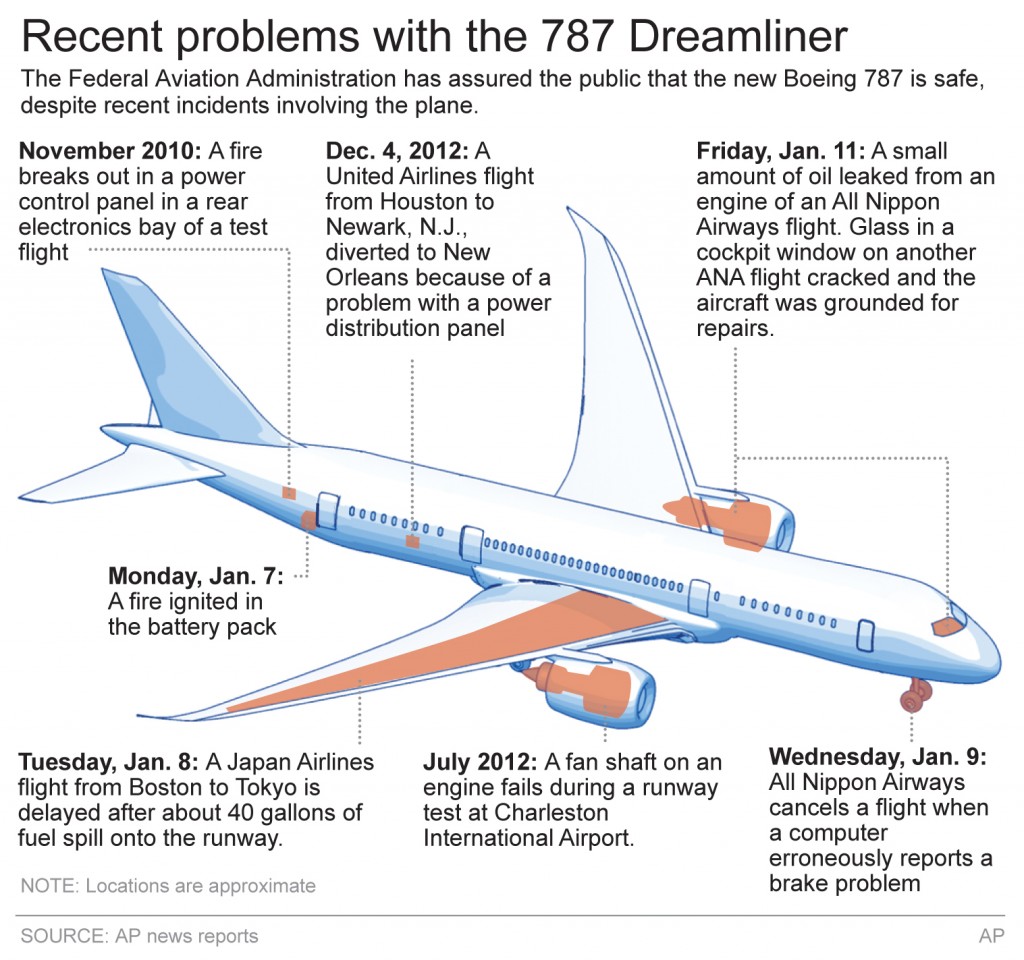 Boeing’s 787 Dreamliner had a nightmare of a week, capped off Friday by the Federal Aviation Administration’s decision to review everything about the new airplane, including its entire design and manufacturing process.

Government officials were quick to say that the jet is safe — nearly 50 of them are in the skies. However, a fire Monday and a subsequent spate of technical problems stirred serious concerns.

None of the eight airlines using the plane plans to stop flying it during the government’s inquiry, and passengers flying the 787 don’t appear to be worried about their safety. But the extensive review raised a host of questions:

A: The battery pack on a Japan Airlines 787 ignited Monday shortly after the flight landed at Boston’s LoganInternationalAirport. Passengers had already left the plane, but it took firefighters 40 minutes to put out the blaze. There were separate issues on other planes this week — fuel and oil leaks, a cracked cockpit window and a computer glitch that erroneously indicated a brake problem.

Also, Boeing had earlier problems with the aircraft’s electronics, both during test flights and after customers started flying the plane.

Q: Should the flying public be worried?

A: Safety regulators say no, even though they’re concerned about the recent incidents.

“I would have absolutely no reservations about boarding one of these planes and taking a flight,” Transportation Secretary Ray LaHood said Friday.

Q: How big of a decision is the FAA review?

A: Richard Aboulafia, an analyst with the Teal Group, called it “pretty remarkable.”

“There does appear to be a systematic problem either with the manufacturing process or with some of the technologies,” he said. “This is needed to reassure the public.”

Q: How long will the review take?

A: FAA Administrator Michael Huerta didn’t put a time frame on the investigation, but said it was “a very high priority.”

Q: If major changes are required, will the FAA ground the planes that are already flying?

A: Theoretically, the FAA could ground the 50 787s that are in service, but no one has suggested it is considering such a drastic move. Right now, the cause of Monday’s battery fire is unknown, so there’s no way to know what a potential fix — if indeed a fix is needed — might involve.

Q: How important is the 787 to Boeing’s future?

A: At the moment, the 787 is a money-loser. Boeing doesn’t expect to begin making a profit on the jet until 2015. But it’s a prestige airplane, intended to offer more comfort for passengers and much better fuel efficiency for airlines in a state-of-the-art design. And considering that some Boeing models have been built for 40 years (e.g. the 737 and 747), the company still hopes to make money on the 787 over time.

A: Boeing hopes the plane will revolutionize air travel. Half of the 787 is made from carbon-fiber composites, which are lighter and stronger than the aluminum used in traditional planes. That means the jet burns less fuel, a big selling point because fuel is an airline’s biggest expense.

The extra strength allows for larger windows and a more comfortable cabin pressure. Composites don’t rust like aluminum, so the humidity in the cabin can be up to 16 percent, double that of a typical aircraft. That means fewer dry throats and stuffy noses.

Q: Is there anything quirky about this plane?

A: There are no window shades. Boeing replaced them with an electronic tinting feature. Click a button below the window, and it slowly starts to darken. The wings curve up at different degrees during flight. ANA has even outfitted its bathrooms with a window and bidet.

Q: What else is different about the plane?

A: More than any other modern airliner, the 787 relies on electrical signals to help power nearly everything. It’s the first Boeing plane to use rechargeable lithium-ion batteries to start its auxiliary power unit, which acts as a generator to provide power on the ground or if the main engines quit. The batteries — each about twice the size of a car battery — allowed Boeing to get rid of a heavier system common on other planes that uses hot air from the outside to start the APU.

Q: Do the lithium-ion batteries pose an added danger?

A: Lithium-ion batteries are potentially more susceptible to fire because, unlike other aircraft batteries, the liquid inside of them is flammable. The potential for fire increases if the battery is depleted too much or overcharged. Boeing has built in special circuitry and other safeguards designed to prevent that situation. In September 2010, a UPS Boeing 747-400 crashed in Dubai after a large number of the batteries it was carrying as cargo caught fire.

Q: How much fuel does it save?

A: Boeing designed the 787 to use 20 percent less fuel than comparable aircraft. The Boeing 767-300ER consumes 1,600 gallons of fuel for each hour in flight. With jet fuel currently costing $2.91 a gallon, airlines could save $13,000 during the 14-hour flight between Boston and Tokyo. There is no public data yet on whether the 787 meets Boeing’s fuel savings promises.

Q: Does any other plane use composites?

A: Composites are used in smaller amounts on most modern planes. Rival plane maker Airbus is designing its own lightweight composite jet, the A350, but that jet is still several years away from flying.

Q: Didn’t it take Boeing a long time to get the 787 airborne?

A: Boeing applied to the FAA to make the 787 in 2003. The first plane flew in December 2009, and six test planes ran up some 4,645 flight hours. The first paying passengers took flight in October 2011, more than three years behind schedule.

Q: Why the delays?

A: Parts for the jet are made by 52 suppliers scattered around the globe. And, in a first for Boeing, large sections of the jet are built by these outside vendors and then joined together. That process, aimed at saving money, wasn’t as smooth as Boeing had hoped. Parts weren’t delivered on time, and the quality of some suppliers’ products was poor.

Q: How much does the plane cost?

Q: How many passengers can fit on the plane?

A: It is designed to carry 210 to 250 passengers. Configurations vary depending on how many business-class seats and how much coach legroom each airline wants to provide.

A: Boeing has delivered 50 planes so far. Another 798 are on order. The company is ramping up production to build 10 787s per month in Washington state and South Carolina by the end of the year.

Q: Is it normal for a new plane to have problems?

A: Any complicated piece of machinery has glitches at first. The Airbus A380, for instance, had an engine explode midflight in late 2010. However, the unique nature of the 787’s construction — and the increased media spotlight on this plane — have regulators doing a more thorough review.

Boeing insists that the 787’s problems are no worse than what it experienced when its 777 was new in the mid-1990s. That plane is now one of its top-sellers and is well-liked by airlines.

Q: Where in the U.S. does the plane fly?

Nippon Airways flies from Seattle and San Jose, Calif., to Tokyo. Japan Airlines flies from Boston to Tokyo, and LAN flies from Los Angeles to Santiago, Chile. Ethiopian started flying the plane to Washington’s DullesInternationalAirport in late September but put a different aircraft on that route in mid-December.

Q: What’s at stake for Boeing?

A: Any more production delays could further upset the airlines that are eager to start flying the plane and cost Boeing millions of dollars in contractual penalties. If major changes are needed, the plane might weigh more, cutting its fuel efficiency. Orders could shift to the Airbus A350.

Q: What other problems could this mean for Boeing?

A: The 787’s long range is one of its main selling points. The FAA limits how far twin-engine airplanes can fly so if the jet loses one engine, it can still fly long enough to make an emergency landing. The 787 already has approval for flights up to three hours away from any airport. Boeing wants to raise that to 5.5 hours, opening up routes across the Pacific. The FAA could now delay that approval.

Q: How is Boeing faring as a company? Is it making money? How’s the stock price doing?

Q: What does Wall Street think?

A: Citi analyst Kevin Gursky has kept a “buy” rating on Boeing Co. stock. Over the long run, he says, faster production of the 787 and other planes should generate cash that benefits shareholders.

Soon after the fire, BB&T analyst Carter Leake cut his rating on Boeing to “hold.” In an interview on Friday, he said he expects Boeing to fix any problems with the 787, but that investors can benefit from growth in the aerospace industry by owning shares in other companies.

Q: What are passengers saying?

Passengers flying the 787 don’t appear to be worried about safety, saying they expect a new plane to have some issues.

In Seattle, Adam Welch was excited for his first flight on a Dreamliner. He heard the news about the FAA’s review and “was just hoping they didn’t ground the plane I was supposed to fly on.” As for the 787’s problems, he said the plane has been experiencing “growing pains.”

Donald Crump from Auburn, N.H., was at Boston’s Logan International Airport Friday, checking in for his third 787 flight. He called the plane’s problems “minor” and said the FAA review was “the politically correct thing to do.” Crump likes the 787 because the well-lit and climate-controlled cabin provides passengers “a much more pleasing environment to travel in.”