Now in its third-day, the French-led effort to take back Mali’s north from the extremists began with airstrikes by combat helicopters in the small town of Konna. It has grown to a coordinated attack by state-of-the-art fighter jets which have bombarded at least five towns, of which Gao, which was attacked Sunday afternoon, is the largest.

More than 400 French troops have been deployed to the country in the all-out effort to win back the territory from the well-armed rebels, who seized control of an area larger than France nine months ago. What began as a French offensive has now grown to include seven other countries, including logistical support from the U.S. and Europe. The United States is providing communications and transport help, while Britain is sending C17 aircrafts to help Mali’s allies transport troops to the front lines. 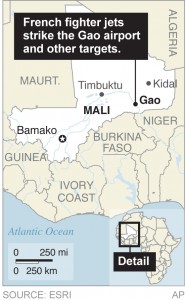 French President Francois Hollande authorized the intervention after it became clear the swiftly advancing rebels could break Mali’s military defenses in Mopti, the first town on the government-controlled side, located in the center of this African country. The move catapulted the world into a fight that diplomats had earlier said would not take place until at least September.

“French fighter jets have identified and destroyed this Sunday, Jan. 13, numerous targets in northern Mali near Gao, in particular training camps, infrastructure and logistical depots which served as bases for terrorist groups,” the French defense ministry said in a statement.

French officials have acknowledged that the rebels are better armed than they expected, and one of the first fatalities was a 41-year-old French pilot whose helicopter was downed by rebel fire near the town of Konna.

The Islamists, including three separate rebel groups, all of which have either direct or indirect ties to al-Qaida, are armed with weapons stolen from the abandoned arsenal of ex-Libyan leader Muammar Gadhafi. They are also in possession of the weapons left behind by Mali’s army, which abandoned the north in the face of the rebel advance last April. The fighters managed to seize the territory in the north after a military coup led to political turmoil in the once-stable nation of 15.8 million last March.

This article appeared in print on page 2 of the January 14th, 2013 edition of Hamodia.