The Islamists who rule northern Mali clashed with government forces for the first time in nearly a year, seizing a strategic city Thursday as the al-Qaida-linked terrorists pushed toward the government line of control in the center of the troubled country.

The capture of the city of Konna marks a dangerous escalation in the Islamists’ confrontation with the Malian government, which is based hundreds of miles to the south in the capital, Bamako.

The fighting in central Mali also comes amid speculation that a regional military intervention to oust the extremists may not come until September at the earliest.

The Islamists seized the town of Douentza four months ago after a brief standoff with a local militia but pushed no further until clashes broke out late Wednesday in Konna, a town of 50,000 people, where fearful residents cowered inside their homes.

A Mali army spokesman refused to comment on the loss of Konna, which is just 45 miles from the government-held town of Mopti, a strategic port city along the Niger River.

However, a soldier, who spoke on condition of anonymity because he was not authorized to speak to journalists, said the army had retreated from Konna. He said several soldiers were killed and wounded, though he did not have precise casualty figures. “We didn’t have time to count them,” he said.

The United Nations said it was concerned about the reported military movements of rebel groups along the front line in Mali, and urged them to adhere to a Dec. 4 ceasefire, U.N. spokesman Martin Nesirky said.

While Konna is not a large town, it has strategic value as “the last big thing … on the road to Mopti,” said J. Peter Pham, director of the Africa program at the Washington-based Atlantic Council.

Al-Qaida’s affiliate in Africa has been a shadowy presence for years in the forests and deserts of Mali, a country hobbled by poverty and a relentless cycle of hunger. Most Malians adhere to a moderate form of Islam. 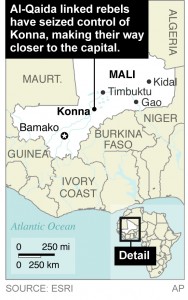 This article appeared in print in the January 11th, 2013 edition of Hamodia.