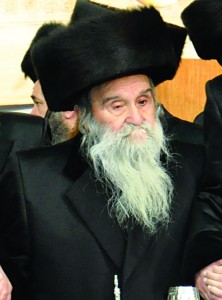 Thousands of chassidim, headed by Gedolei Yisrael, participated yesterday in the levayah of Harav Moshe Ernster, zt”l, the son-in-law of the Imrei Chaim of Vizhnitz, zy”a, nasi and founder of the Maor Chaim mosdos in Yerushalayim and Tzfas. Harav Ernster passed away early on Tuesday morning after an illness at the age of 88. He leaves behind a beautiful generation of Rabbanim, Roshei Yeshivos and marbitzei Torah.

Harav Moshe Ernster was born in the city of Klausenburg, Romania on 24 Tishrei 5685/1924. His father was Reb Chaim Ernster, Hy”d, who was one of the prominent residents of Klausenburg and the head of Kehillas Chassidim.

Reb Chaim, who was descended from the Zera Berach, was very close to the Vizhnitzer court from the time he was saved by the Ahavas Yisrael of Vizhnitz during a difficult trial. He contributed to the construction of the dormitory building of the yeshivah gedolah in the city of Vizhnitza; he also gave a sefer Torah and bookcases. He sent his four sons to learn in the yeshivah in Vizhnitza.

Reb Moshe’s mother, Gittel, a”h, was the daughter of Harav Menachem Klein, zt”l, a Rav in the city of Tatch who was very close to the Vizhnitzer Rebbes. The Ahavas Yisrael was very fond of him and marveled at his power of tefillah. Reb Menachem was known to be very erudite and sometimes, when the Ahavas Yisrael traveled to a resort town, he took him along as a shochet.

Reb Chaim was very admired among the residents of Klausenburg and was known for his tremendous honesty in business. He once lost a large sum of money when he discovered that it came from questionable sources. Reb Chaim’s home served as a lodging place for Gedolei Yisrael. Reb Moshe would relate that Harav Yoel, the Satmar Rebbe, zy”a, stayed in their home, and as children, they made different signs to test whether he slept in his bed or not, and discovered that indeed, he did not.

The day after his bar mitzvah, Reb Moshe left his home and warm family and traveled to learn under the Damesek Eliezer, a son of the Ahavas Yisrael, in the yeshivah in Vizhnitza. He learned there for several years, amazing all those around him with his diligence and abilities, and grew tremendously in Torah and Chassidus. He learned in the yeshivah until it was forced to close when the Russians captured the area at the beginning of World War Two, and fled back to Klausenburg.

But he wanted to learn so he traveled to Grosswardein and learned in the Vizhnitz Yeshivah established by the Imrei Chaim and his son the Yeshuos Moshe, zy”a. There, too, his name became synonymous with diligence in learning, and he was drawn close by the Imrei Chaim. Reb Moshe continued to make great strides in his learning until the Nazis invaded Hungary and the yeshivah had to close.

He fled from Grosswardein, and miraculously was able to reach Bucharest, Romania, which had not been captured by the Germans. While in Romania, he learned that his parents and part of his family had perished, while he, his brother, the renowned Agudah askan Reb Simchah, z”l, and ybl”c, his sister, the wife of Harav Simchah Yosef Weider, z”l, had survived.

In 5705/1945, Reb Moshe came to Eretz Yisrael, where he was once again able to bask in the presence of his rebbe, the Damesek Eliezer. Even decades after the Damesek Eliezer’s passing, Reb Moshe would participate in the Shabbos Hisvaadus of the talmidim, and he would emotionally share memories of his Rebbe, zy”a.

After the passing of the Damesek Eliezer, when the Imrei Chaim came to Eretz Yisrael, he chose Reb Moshe as a chassan for his daughter, Rebbetzin Sheva Brachah, a”h. In a letter to his chassidim abroad, the Imrei Chaim wrote: “To my joy I can inform you that Baruch Hashem … my dear daughter Sheva is engaged to a bachur who is a talmid chacham and yerei Shamayim, who already learned in the yeshivah while it was still in Grosswardein … May Hashem help that it should be a mazel tov and may we see from them generations of … lomdei Torah  and shomrei mitzvos who should give Hashem much nachas….”

The wedding took place in Tel Aviv on 19 Adar II 5708/1948. Vizhnitz chassidim waited with great anticipation for this day, when they could rejoice in the simchah and find a consolation for all they had been through. But the festivities were marred by the War of Independence in Eretz Yisrael, which was growing more serious from day to day. Nevertheless, the chassidim tried to ensure that the day would be as joyous as possible.

Harav Moshe later related: “On the day of the chuppah I sat alone in my room, learning and davening, and suddenly I began to feel pain and anguish; the memories from home flooded my mind and I was very sad. I sat alone in my world, orphaned of both parents, and even my brother, Reb Simchah, was still in Romania. Who would be with me? Who would listen to me?

“Like an angel, my relative, Harav Yehudah Horowitz of Dzikov, zt”l, a grandson of the Ahavas Yisrael, my future-brother-in-law, appeared [he was also a son-in-law of the Imrei Chaim] and he was the omed mitzad hachassan. Reb Yidel sensed my thoughts and began to encourage me and give me chizuk. ‘Do you know whose son you are? Whose grandson you are? You knew your grandfather, Reb Menachem, zt”l; he was a holy person. I believe he was one of the Gedolei Hador!’ Reb Yidel told me a lot of great things about my grandfather and my father for a long time, and helped lift me out of my sadness…”

The impressive dais at the wedding, with some 30 Rebbes and Rabbanim who lived in Tel Aviv at the time, was a glorious testimony to the eternity of Am Yisrael. Despite the fact that a mere three years earlier, Am Yisrael had been struck with the worst destruction, there was resurrection and hope for Yiddishkeit. Among the personages who graced the dais were the Mekor Baruch of Seret- Vizhnitz, the Ruzhiner Rebbes, Harav Mordechai of Bilgoraj and the other Rabbanim in the family. Even Harav Aharon of Belz, zy”a, came to wish mazel tov at the Imrei Chaim’s home.

The day of the chuppah was extremely rainy, yet the Imrei Chaim did not wait and went out to the chuppah. At the end of the chuppah, he was clearly in a joyful mood, and he turned to those around him: “I wouldn’t sell this, the rains, for all the money in the world!”

When he saw the chassidim’s surprised expressions, he said, “What do you understand about gishmei brachah? I wouldn’t replace this rain for anything. I wouldn’t sell it for all the money in the world. You’re worrying about my shtreimel dripping water? Do you know how much this rain is worth to me? What a segulah it is? It is a great segulah to have children and grandchildren who are yirei Shamayim!”

Since his marriage, Reb Moshe stood beside his father-in-law; the two were very close and he went above and beyond his ability to help the Imrei Chaim in his many endeavors. He devoted himself to establishing Shikun Vizhnitz and the institutions. When the Imrei Chaim was recovering from various ailments, he rested in his son-in-law’s home, spending several weeks there, while Reb Moshe and his Rebbetzin did all they could to make him comfortable.

In addition to being a remarkable talmid chacham, Reb Moshe felt a constant drive to work on behalf of the klal, both in the Vizhnitzer court and further afield. When the chareidi communities had not yet left the central cities to live in the periphery, he saw how difficult it was to find apartments at reasonable prices. He eventually established the Maor Chaim communities in Yerushalayim and Tzfas, which bear the name of his father-in-law the Imrei Chaim. In these communities, he established education institutions, and organizations that helped families and special children. Perpetuating the memories of those lost during the Holocaust was another area in which he was very active.

He was constantly looking for how to help people. He established industrial factories and diamond polishing centers for chareidi avreichim so that they would have a source of livelihood. Yet he was very modest and refined, and avoided discord, doing what he could to foster peace.

The brachah of the tzaddik was fulfilled and he merited to have a generation of children, grandchildren and great grandchildren who are Rabbanim, marbitzei Torah and loyal chassidim. He became a mechutan with many Gedolei Yisrael. His sons are: Harav Zev, Rav of Maor Chaim in Yerushalayim; Harav Menachem, Rosh Yeshivah, Vizhnitz and a son-in-law of the Yeshuos Moshe of Vizhnitz; Harav Yisrael, who lives in Brooklyn; and Harav Eliezer, the Rav of Maor Chaim community in Tzfas. His only daughter is Rebbetzin Gittel Adler, whose husband is the Dzikover Rebbe, shlita.

In recent years, Reb Moshe grew steadily weaker, yet he continued gracing the numerous family simchos with his presence. On Tuesday morning he passed away after an illness. His levayah departed from the Bais Medrash in Maor Chaim in Sanhedria Murchevet, where a large crowd gathered, headed by the Rebbes of Belz, Slonim, and Karlin Stolin, as well as many Rabbanim.

From there the levayah proceeded to Kiryas Vizhnitz in Bnei Brak where thousands of people, headed by the Vizhnitzer Rebbe, shlita, gathered in the large Beis Medrash. His sons recited Kaddish, and then the crowd accompanied him on his final journey. He was buried in the Shomrei Shabbos cemetery in Zichron Meir, in the Ohel of Vizhnitz alongside the Ahavas Yisrael and his descendants, zy”a.

This article appeared in print on page D1 of the January 9th, 2013 edition of Hamodia.