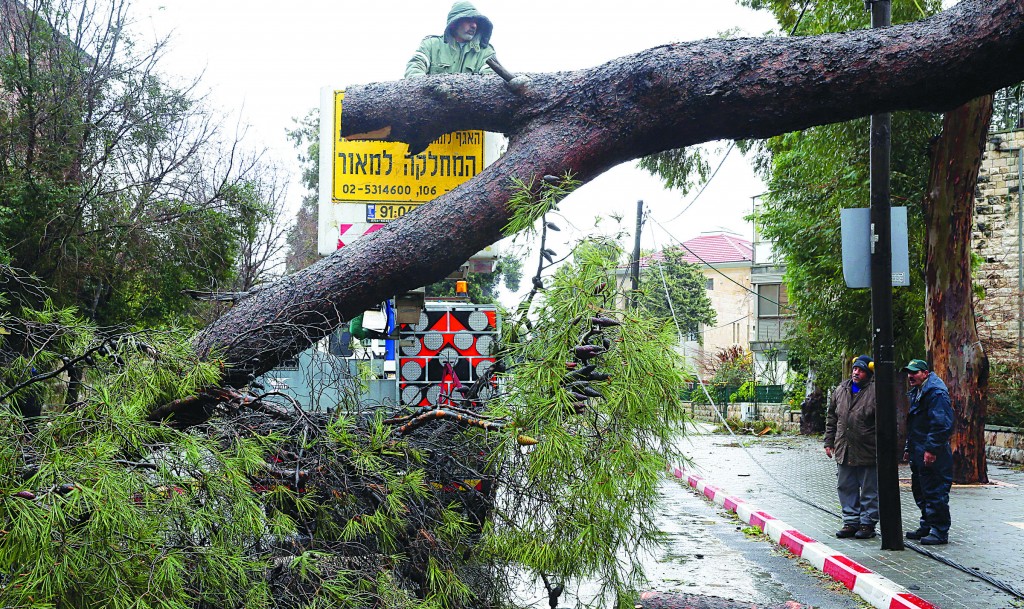 Massive downpours and cold, howling winds continued throughout Israel on Monday as one of the biggest winter storms in recent memory drenched the country.

As welcome as the rainfall has been after years of drought, Israelis nevertheless had to cope with widespread flooding, power outages, and flying and fallen debris due to the unusually strong winds.

In Yerushalayim, overnight Sunday various objects, including aluminum roofing structures went flying in the streets. People who daven vasikim told Hamodia of how they had to fight the wind to get to shul. And many children woke during the night from the tremendous racket caused by the storm.

The accumulated rain so far recorded was up to 3.9 inches in the central Coastal Plain, 1.6 to 2.7 inches in the Galil and 0.98 in

the Yerushalayim area as of  midday Monday, according to the Israel Meteorological Services (IMS), though much more was expected in coming days.

The Kinneret basin’s level was at 211.72 meters below sea level, 10 centimeters below that of the morning before and still 2.92 meters from being full.

Flooding at the Herzliya train station, which had forced it to shut down operations since midday Sunday, was open by midday Monday, though further service interruptions and delays were anticipated.

Shoppers at Modi’in’s Azrieli Mall witnessed an indoor flash flood as water streamed into the mall, creating “a veritable river,” according to The Jerusalem Post. Police and firefighters were called in to evacuate, and no one was injured.

At Magen Junction in the south, two passengers were slightly injured when a tree collapsed onto their vehicle. They were taken to Soroka Medical Center in Be’er Sheva for medical treatment. On Bartenura Street in Bnei Brak a man was lightly injured when he was hit by a flying tree branch and received first aid on the spot, Haaretz reported.

In Nesher, near Haifa, a tin structure collapsed, damaging parked cars. In Hadera and Pardes Hannah on the northern coast, trees have fallen and a number of homes have been flooded. A tree fell on the road near Biriya, blocking traffic in the area, as did a mudslide. In addition, part of Route 804 in the north was closed to traffic due to flooding in the Hilazon riverbed. Floods in the Upper Galil have also caused serious damage to fields.

The storm has disrupted air traffic, as well. Arkia Airlines will relocate its domestic activity today, including flights to Eilat, from Sde Dov Airport in Tel Aviv to Ben-Gurion International Airport due to the challenging weather conditions.

Near-freezing temperatures and some of the wettest weather has been reported in the north. In preparation for hypothermia cases, the main emergency room at Rebecca Sieff Hospital in Tzefas has readied stocks of infusions, external warming equipment and thermal. Increased supplies of heating oil, oxygen, pharmaceuticals and food will also be stockpiled, for storm victims.