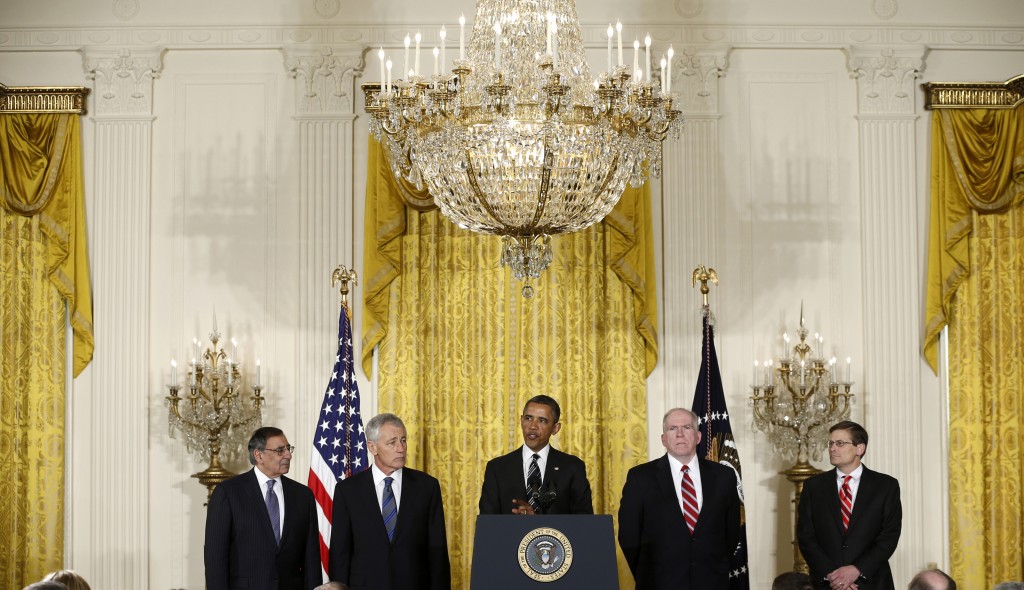 Controversy surrounds both choices, but the president called on the Senate to quickly confirm both.

“The work of protecting our nation is never done. We’ve got much to do,” Obama said at the East Room announcement. “My most solemn obligation is the security of our people.”

Obama announced his choice of Hagel, a political moderate who represented Nebraska in the Senate, even as critics questioned the pick over issues including Hagel’s views on Israel and Iran.

Obama praised Hagel’s independence and bipartisan approach, and said that as a Vietnam veteran, he understands war is not an abstraction. He also praised Hagel, 66, as one who could make “tough fiscal choices.”

In nominating Hagel, Obama signaled he is willing to take on a tough confirmation fight. Once Hagel emerged as Obama’s likely nominee, GOP lawmakers began sharply questioning his commitment to Israel and his willingness to take a hard line with Iran over its disputed nuclear program.

Hagel, something of a maverick among Republican senators during his two terms, has criticized the discussion of a military strike by either the U.S. or Israel against Iran. He also worried some Israel supporters with his reference to the “Jewish lobby” in the U.S. And he has backed efforts to bring Iran to the table for future peace talks in Afghanistan.

Brennan, 57, a 25-year CIA veteran, is a close Obama adviser who has served in his present post for four years.

The president praised him as one of America’s most skilled and respected intelligence professionals. Obama said both nominees understand that “the work of protecting our nation is never done.”

Brennan withdrew from consideration for the spy agency’s top job in 2008 amid questions about his connection to harsh interrogation techniques used during the George W. Bush administration.

Hagel, in brief remarks, thanked Obama “for this opportunity to serve this country again, especially its men and women in uniform. … These are people who give so much to this nation every day.”

Hagel voted for U.S. military involvement in the Iraq war at first, but later opposed it. He broke ranks with other Republicans to support Obama for president in 2008.

If confirmed, he would replace Leon Panetta as defense secretary.

Obama said Panetta, standing with the others alongside the president, had “earned the right to return to civilian life.”

Panetta was CIA director before Obama tapped him to be defense chief.

Along with secretary of state nominee Sen. John Kerry (D-Mass.), Hagel and Brennan would play key roles implementing and shaping Obama’s national security priorities in a second term. All three men must be confirmed by the Senate.

Sen. Lindsay Graham (R-S.C.) has called Hagel’s foreign policy views “outside the mainstream” and has said he would be “the most antagonistic secretary of defense toward the state of Israel in our nation’s history.”

The appointment could also signal further strains in what is already a cool relationship between President Barack Obama and Israeli Prime Minister Benjamin Netanyahu, who is expected to win re-election later this month.

“Because of his statements in the past, and his stance toward Israel, we are worried,” Reuven Rivlin, the speaker of the Knesset and a member of Netanyahu’s Likud Party, told The Associated Press. But, he added, the strategic partnership between the U.S. and Israel is strong, and “one person doesn’t determine policy.”

Netanyahu’s office declined to comment on the appointment, as did officials in the Israeli foreign and defense ministries.

Although bracing for a confirmation fight over Hagel, the administration has expressed confidence both its nominees will be confirmed.