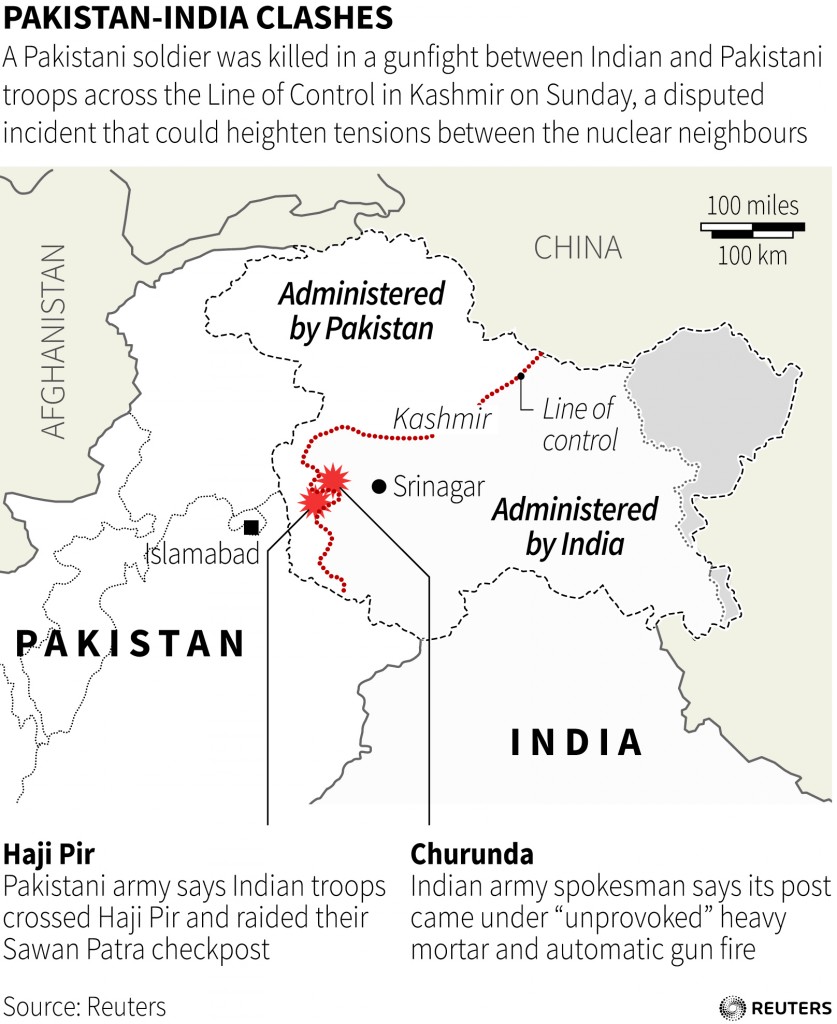 Pakistan and India traded accusations yesterday of violating the ceasefire in the disputed northern region of Kashmir, with Islamabad accusing Indian troops of a cross-border raid that killed one of its soldiers and India charging that Pakistani shelling destroyed a home on its side.

The accusation of a border crossing resulting in military deaths is unusual in Kashmir, where a ceasefire has held between these two wary, nuclear-armed rivals for a decade. Tensions over the disputed region are never far from the surface, however, as the countries have fought two full-scale wars over it.

Pakistan and India have been in the midst of a tentative rapprochement in recent months that could be upset by the cross-border raid. Just last month, the two countries announced a new visa regime designed to make cross-border travel easier. And they have been taking steps to facilitate economic trade as well. Neither action would have been possible without the backing of Pakistan’s powerful military.

The developments show how tensions have eased a great deal since the 2008 Mumbai terror attacks, in which 10 Pakistani terrorists killed 166 people. India claims the terrorists had ties to Pakistani intelligence officials, which Islamabad denies.

The Pakistani military’s public relations office said in a statement that a Pakistani soldier was also critically wounded in the incident. It said troops exchanged gunfire after Indian forces crossed the “line of control” dividing the Indian and Pakistani sides of Kashmir in the Haji Pir sector and raided a post called Sawan Patra.

The remote area where the incident occurred is up in the Himalayan Mountain peaks. The closest town of Bagh, about 50 kilometers (30 miles) away, is itself about 260 kilometers (160 miles) from the Pakistani capital of Islamabad.

Col. Brijesh Pandey, a spokesman for the Indian army in Kashmir, called the allegations that Indian troops crossed the border “baseless.” Instead, he said that Pakistani troops “initiated unprovoked firing” and fired mortars and automatic weapons at Indian posts early Sunday morning. He said Pakistani shelling had destroyed a civilian home on the Indian side.

“We retaliated only using small arms. We believe it was clearly an attempt on their part to facilitate infiltration of militants,” Pandey said.

India often accuses Pakistan of sending militants into the Indian-controlled part of Kashmir, often under cover of these types of skirmishes.

The mostly-Muslim mountainous Kashmir region has been a flashpoint of violence between these two neighbors for decades. Both claim the entire region as their own, and the countries fought two full-scale wars over control of Kashmir and some minor skirmishes.