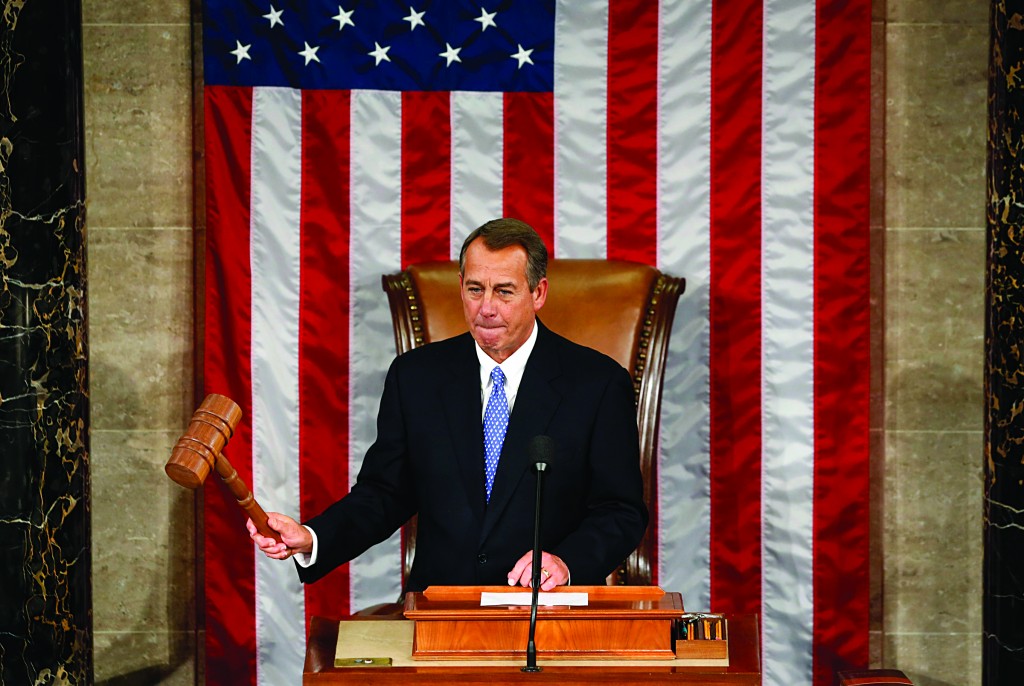 A new Congress opened for business Thursday to confront long-festering national problems, deficits and immigration among them, in an intensely partisan and crisis-driven era of divided government.

“The American dream is in peril,” said House Speaker John Boehner (R-Ohio), re-elected to his post despite a mini-revolt in Republican ranks.

Moments after grasping an oversized gavel that symbolizes his authority, Boehner implored the assembly of newcomers and veterans in the 113th Congress to tackle the nation’s heavy burden of debt at long last. “We have to be willing — truly willing — to make this right.”

Also on the two-year agenda is the first significant effort at an overhaul of the tax code in more than a quarter-century. Republicans and Democrats alike say they want to chop at a thicket of existing tax breaks and use the resulting revenue to reduce rates.

There were personal milestones aplenty as the winners of last fall’s races took an oath of office as old as the republic.

Senators Heidi Heitkamp of North Dakota, Elizabeth Warren of Massachusetts, Tammy Baldwin of Wisconsin, Mazie Hirono of Hawaii and Deb Fischer of Nebraska were among the newcomers sworn in, raising the number of women in the Senate to a record 20. Tim Scott of South Carolina became the first black Republican on the Senate in more than three decades.

On the first day of a new term, one old-timer made a stirring comeback. Republican Sen. Mark Kirk of Illinois returned to the Capitol for the first time since suffering a stroke a year ago, walking slowly up the 45 steps to the Capitol with the use of a cane. “Good to see you, guys,” he said.

Across the Capitol, children and grandchildren squirmed through opening formalities that ended with Boehner’s election as the most powerful Republican in a government where President Barack Obama will soon be sworn in to a second term and his fellow Democrats control the Senate.

“At $16 trillion and rising, our national debt is draining free enterprise and weakening the ship of state,” said the Ohio Republican, whose struggles to control his members persisted to the final weekend of the 112th Congress when “fiscal cliff” legislation finally cleared.

“The American dream is in peril so long as its namesake is weighed down by this anchor of debt. Break its hold and we will begin to set our economy free. Jobs will come home. Confidence will come back.”

Senate Majority Leader Harry Reid (D-Nev.) said he, too, is ready for attempts to rein in federal spending, but laid down a few conditions. “Any future budget agreements must balance the need for thoughtful spending reductions with revenue from the wealthiest among us and closing wasteful tax loopholes,” he said.

That was in keeping with Obama’s remarks after Congress had agreed on fiscal cliff legislation to raise taxes for the wealthy while keeping them level for the middle class.

Boehner and Senate Republican Leader Mitch McConnell have other ideas, both having said in recent days that the days of raising taxes are over.

“Now is the time to get serious about spending,” McConnell said. “And if the past few weeks have taught us anything, that means the president needs to show up early this time.” People won’t “tolerate the kind of last-minute crises that we’ve seen again and again over the past four years as a result of this president’s chronic inactivity and refusal to lead on the pressing issues of the day.”

While neither Boehner nor Reid mentioned immigration in their opening-day speeches, Obama is expected to highlight the issue in the first State of the Union address of his new term. Lawmakers are already working toward a compromise they hope can clear both houses.

Most Democrats have long favored legislation to give millions of illegal immigrants a chance at citizenship, and Republicans have stoutly resisted. Now, though, many within the GOP appear ready to reconsider, after watching with alarm as Obama ran up an estimated 71 percent of the Hispanic vote in winning re-election over Mitt Romney in November.

There is little doubt that fiscal issues are at the forefront, though, as they have been since the economy cratered more than four years ago. The issue dominated the just-ended Congress from beginning to end as tea-party-backed lawmakers pressed relentlessly to cut spending and reduce deficits.

The next big clash is expected to begin within weeks. A two-month delay in automatic spending cuts expires at the end of February. As well, the administration will seek authority to borrow more money in late winter or early spring, and financing expires for most government agencies on March 27.

Republicans have said they intend to seek significant savings from Medicare, Medicaid and other government benefit programs to gain control over spending. Obama has said he won’t bargain over the government’s borrowing authority. He has also said he is open to changes in benefit programs but would face resistance on that from liberal Democrats.

Boehner will lead a House that has a Republican majority of 233-200, with two vacancies, a loss of eight seats for the GOP. Fourteen Republicans declined to vote for him, a reflection of their unhappiness with his leadership, but several more defections would have been needed to deny him a first-ballot victory.

Democrats hold a 55-45 majority in the Senate and control two more seats than they did the past two years.