General Stocks Shoot Up as Investors Bet On ‘Cliff’ Deal 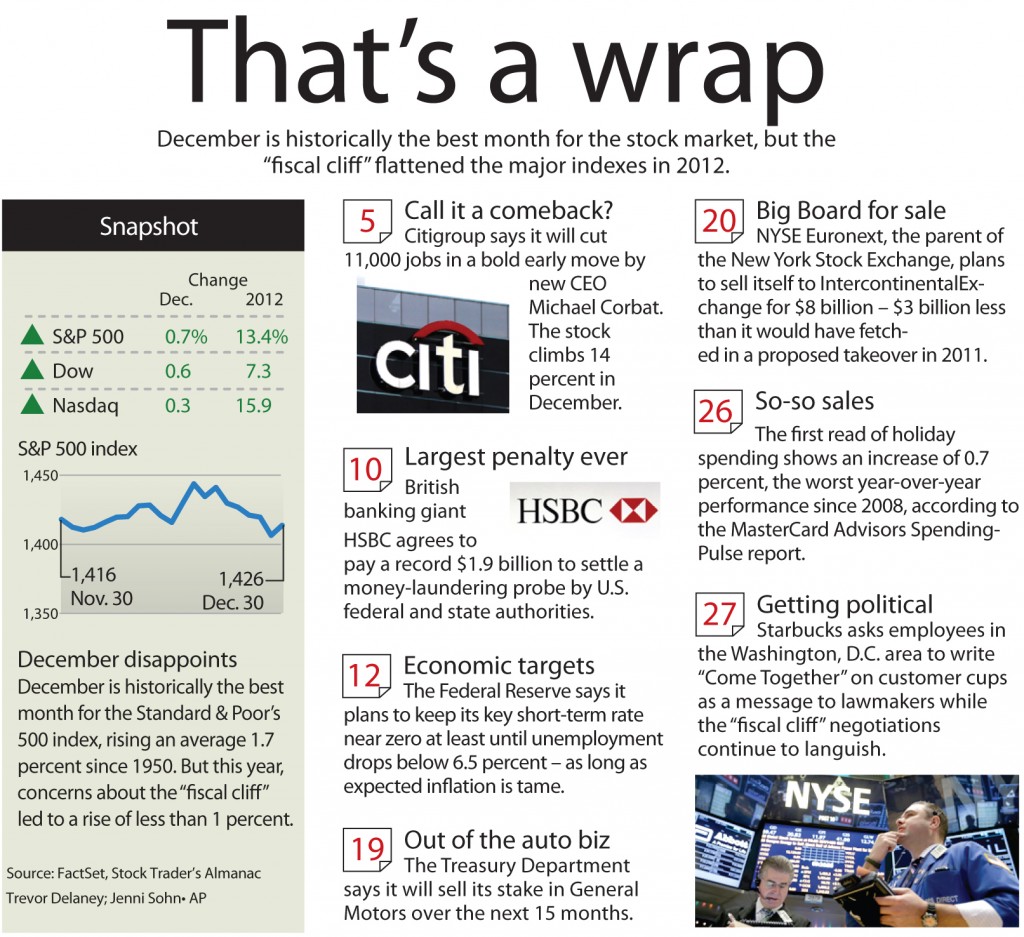 The stock market shot higher on Monday even as the “fiscal cliff” neared. By the time trading ended, Republicans and Democrats still hadn’t reached a budget compromise — but investors were betting that they would.

It was a dramatic day on what turned out to be a strong year for stocks. The Standard & Poor’s 500 index rose 13.4 percent for the year, after finishing flat in 2011. It was the index’s best year since 2009, and it came despite overhanging problems like Europe’s debt crisis and anemic U.S. growth, bringing U.S. indexes close to their highs reached before the 2008 financial crisis.

Including dividends, the gain for the S&P 500 was even higher — 16 percent.

The close Monday was a high note in what had been a choppy day for the market, as choppy as the “fiscal cliff” deal-making that has been yanking it around. It also marked a turnaround after five straight days of “cliff”-influenced losses. The Dow Jones industrial average and the Standard & Poor’s 500 both climbed more than 1 percent. The Nasdaq composite index rose 2 percent.

Stocks fell at the opening of trading Monday and struggled for direction throughout the morning. Stocks jerked higher at midday following reports that the bare outline of a deal to avoid the “cliff” had been knit together. The gains faded after President Barack Obama said in the early afternoon that a compromise was “within sight,” but not finalized. Then, in the late afternoon, the indexes shot higher again.

With the “fiscal cliff” still closing in, investors’ opinions about its potential impact varied, making its long-term effect on the market hard to guess.

Some investors are unruffled. They think that even if the U.S. does go over the “cliff,” it would be more akin to the anti-climactic Y2K scare. Others are more concerned. The higher taxes and lower government spending could take more than $600 billion out of the U.S. economy and send it back into recession.

The psychological impact — the U.S. would essentially be broadcasting that its lawmakers can’t compromise — would also hurt.

U.S. government amid similar negotiations in August 2011, when lawmakers were arguing over the government’s borrowing limit. S&P said at the time that the “political brinksmanship” highlighted how “America’s governance and policymaking [is] becoming less stable, less effective, and less predictable.” Its rating cut sent the stock market into a tailspin.

The other major ratings agencies, Moody’s and Fitch, have suggested that they might lower their ratings of the U.S. because of the “fiscal cliff.”

It’s also one of the only stories. There’s been little other news to trade on during this weeks, giving the “fiscal cliff” drama outsized influence. No major companies are scheduled to report earnings this week. The most significant economic indicator scheduled for this week, the government’s monthly jobs report, won’t be released until Friday.

The yield on the benchmark 10-year Treasury note rose to 1.76 percent from 1.70 percent late Friday, a sign that investors were moving money into stocks.

Some of the best-performing stocks for the year were those that were making up for deep losses in 2011. Homebuilder PulteGroup nearly tripled after falling for five of the previous six years. Appliance maker Whirlpool and Bank of America more than doubled over the year, after falling by double-digit percentages in 2011.

Some of the worst performers of 2012 were Best Buy, Hewlett-Packard and J.C. Penney. All are struggling to keep up with competitors who have adapted more quickly to changing technologies and customer tastes. They were all up for the day, but were all down at least 44 percent for the year.