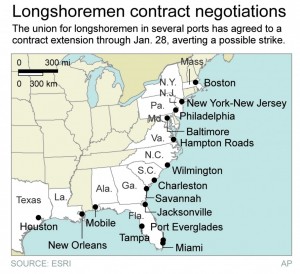 Dockworkers along the East Coast and the Gulf of Mexico agreed Friday to extend their contract for more than a month, averting a weekend strike that could have crippled major ports from Boston to Houston and bottled up billions of dollars’ worth of cargo.

Talks aimed at reaching a new contract covering the 14,500 longshoremen will continue during the extension, which runs through Feb. 6.

The dockworkers’ union and an alliance of port operators and shipping lines agreed to the extension after resolving one of the stickier points in their negotiations, involving royalty payments to longshoremen for each container they unload. Details were not disclosed.

“While some significant issues remain in contention, I am cautiously optimistic that they can be resolved,” he said.

The contract between the International Longshoremen’s Association and the U.S. Maritime Alliance originally expired in September. The two sides agreed to extend it once before, for 90 days, but it had been set to expire again at 12:01 a.m. Sunday.

As recently as Dec. 19, the president of the longshoremen’s union, Harold Daggett, had said a strike was expected.

A walkout would have crippled the loading and unloading of a vast number of products, including electronics and clothing, and made it more difficult for U.S. manufacturers to get parts and raw materials at a time when the economy is in shaky condition. The ports involved handle about 40 percent of all U.S. container cargo.

Business groups expressed relief that the two sides had agreed to keep the docks running.

“A coast-wide port shutdown is not an option. It would have severe economic ramifications for the local, national and even global economies and wreak havoc on the supply chain,” said National Retail Federation President Matthew Shay.

White House spokesman Matt Lehrich said: “We’re pleased the parties are going to continue their work at the negotiating table and continue to urge them to reach an agreement as quickly as possible.”

Major ports that would have been frozen included the massive terminals serving the New York City area and critical seaports in Savannah, Ga., Houston, and Hampton Roads, Va.

Other ports that would have been affected are in Boston; the Philadelphia area; Baltimore; Wilmington, N.C.; Charleston, S.C.; Jacksonville, Fla.; Fort Lauderdale, Fla.; Miami; Tampa, Fla.; Mobile, Ala.; and New Orleans.

Longshoremen on the West Coast have a separate contract.

This article appeared in print on page 4 of the December 31st, 2012 edition of Hamodia.