Prime Are We There Yet? The COVID Reopening 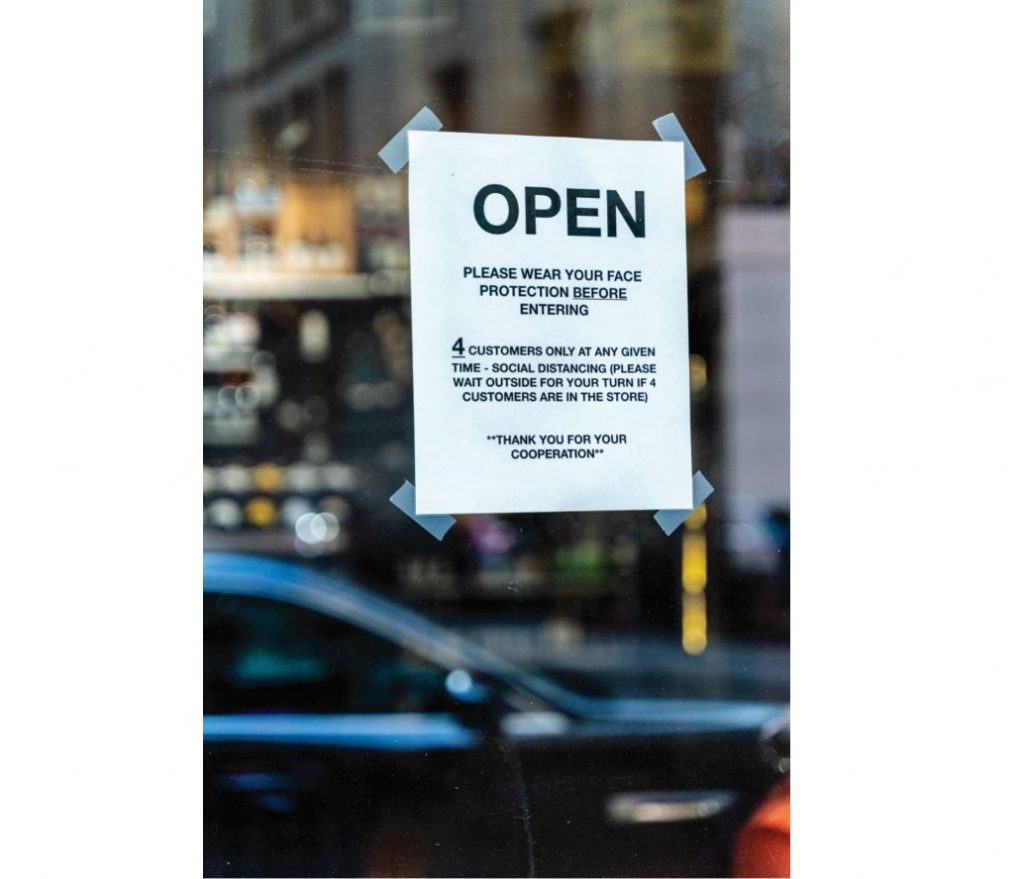 The coronavirus pandemic appears to be receding, public officials have proudly announced entry into a phased reopening.

Observing the death and physical suffering the illness has brought to so many, little needs to be said to prove the seriousness of the threat that COVID-19 poses. Nor is there doubt that by nearly all accounts the draconian lockdown measures deserve the lion’s share of credit for slowing its initial wildfire spread. Yet, in many areas, where close to two months without significant spread have renewed many people’s comfort in resuming regular activities, many are prepared to move beyond curbside pickup and gatherings at a six-foot distance.

Images of huge crowds demonstrating against police brutality, sanctioned — and in some instances joined — by public officials, pushed many to further question their obligation to observe the lockdown while mayors and governors seemed ready to forgo social distancing for a cause they determined superseded health risks. In New Jersey, a day after Governor Phil Murphy faced criticism for his role in a march, an executive order was signed that significantly raised the limits on both outdoor and indoor gatherings a week ahead of entry into the state’s Phase Two, which will open nonessential retail to 50% capacity. Still, in New York City, where Mayor Bill de Blasio took an even more active role in supporting protests, the metropolis made no further concessions beyond the previously scheduled commencement of its first phase, making only modest adjustments to the lockdown regimen.

With many businesses still shut or suffering and schools shuttered — with lingering questions as to when and how they will open — more and more people ask how long the restrictive measures can and should stay in place. Even discounting the lockdown’s still untold economic cost, as more people find creative ways to go about their affairs — with or without the government’s approval — the wisdom of continuing policies that are increasingly out of step with the sentiments of much of the populace is giving rise to obvious questions about how to best navigate the still-uncharted waters of the less deadly, but ironically less clear-cut, stages of the pandemic.

“There are some who are misrepresenting these policy tensions as a debate of health versus the economy, which is not correct,” said Awi Federgruen, an expert in statistical analysis and applied sciences and a professor at Columbia University.

Comparing the risks of continuing some of the lockdown’s more inhibiting protocols to the Talmudic principle of the need to nullify a decree by which the which a majority of the populace cannot abide, he said that in New York the current pace of reopening might be at risk of losing its effectiveness. Prof. Federgruen posited that under the present circumstances, officials could likely do more to fight the virus by moving faster but implementing more regulation of behavior, such as limiting capacity and the wearing of masks, rather than continuing rules like those that ban customers from entering retail stores.

“It’s important for [government] to work with the community and not against it; if too many people aren’t listening to the guidelines, then government hasn’t accomplished its goal either,” he said. “Indeed, we may be getting to that point.”

While public health experts and virologists might have warned of the long-term nature of the fight against COVID, when the nation shut down in mid-March, few expected not to be able to legally walk into a clothing store in early June. Hospitalizations and other key indicators have dropped in most areas of the hard-hit and still largely restricted New York metropolitan area, yet policy makers have delivered on their promise that reopening would be measured and deliberate.

While the reasoning behind such an approach has obvious advantages, especially coming off the success of extreme social distancing in beating back the pandemic, Doug Badger, senior fellow at the Galen Institute, a health care policy think tank, said the slow pace was predicated on a misconception as to the goal of the lockdown.

“One of the weaknesses of the lockdown strategy is that it’s not sustainable in the long term,” he said.

While acknowledging that the measures taken in the early weeks of the outbreak are to be credited for “flattening the curve,” Mr. Badger said that its purpose has been misapplied by many policymakers.

“My impression is that people got locked into the social distancing idea as an organizing principle, so every action is understood in terms of lockdown and the exceptions made to it,” he said. “Officials are looking at the lockdown not as an expedient, but as a solution, which it was never meant to be. It’s a very narrow approach that doesn’t allow the evolution of policy and creates blind spots.”

A broader look at the effects of the lockdown on medical care also throws open questions as to whether a speedier reopening could have positive health benefits, as months of cancellations of elective surgeries and a general fear of entering hospitals have kept many with non-COVID-related ailments from seeking the care they needed.

“In making policy decisions, government needs to look beyond just focusing on the COVID pandemic,” said Prof. Federgruen. “There is a lot of evidence that people who were locked down did not take care of other health issues. It also had an obvious effect on mental health. Taking all these things into account at once is easier said than done, but that is what should be taking place.”

However anxious the populace might be, in areas where the pandemic struck the hardest, the fear of losing what has been gained over the past months creates an obvious conundrum.

“The reasons for going slow are very clear,” said Edward Kaplan, a professor of public health at Yale University. “We know there are infected persons out there, and we don’t know who they are, so it’s hard not to expect more infection. There is a lot of concern of second waves in the fall, but I’m afraid that based on how people behave, we could see a human-made rebound sooner than that, like around August.”

Most leading public health voices, among them the nation’s leading infectious disease expert, Dr. Anthony Fauci, have argued that reopening too soon would lead to a dangerous resurgence and that a loosening of restrictions must be gradually phased in, staggered enough to be able to study the statistical effects of each.

Given the success of lockdown measures, Prof. Kaplan said that policy should not be determined by the increasing numbers failing to obey them.

“I don’t think we want a situation where small groups of people who are finding ways around the law should be deciding how government makes decisions about the guidelines,” he said. “If anything, it means that government should be more vigilant about their enforcement of the rules.”

Prof. Kaplan said that while society must find ways to move toward a resumption of activity, it would do best to follow the plethora of professional models developed for decreasing the risk of mass spread in places like offices, schools and houses of worship, rather than looking for shortcuts to return to pre-COVID-19 existence.

Countries and states that have moved faster to reopen have seen mixed results. Georgia and Florida were among the first to take aggressive measures to reopen business. The number of cases in both states have risen, but not at an alarming rate.

Israel won much praise for its early and strictly enforced lockdown measures, but its efforts to open stores and schools now seem endangered by escalating infection rates. Last week Texas, North and South Carolina, California, Oregon, Arkansas, Mississippi, Utah and Arizona, which had all relaxed their restrictions significantly, saw their highest levels of hospitalizations yet since the onset of the pandemic.

“These outbreaks aren’t from one event; they’re the result of remixing a population, and [they] reinforce why it’s prudent to move slowly,” said Prof. Kaplan.

Yet some have cautioned against pointing to rising case numbers in reopened regions, saying that higher rates of infection are an unavoidable consequence and need not be a red light, as long as the number of severe cases does not rise to an alarming level.

“I think Israel and Singapore have seen an anticipated spike, but not one that’s overly dramatic,” said Prof. Federgruen. “It’s true that Israel had to close 100 schools, but that’s compared to thousands that stayed open, and while more people are testing positive there, hardly any of the cases have been severe.”

While much remains unknown about the novel coronavirus, over the three months of its outbreak in the United States some clear patterns have emerged. Nearly 80% of deaths have been among people over 65 years of age, and among younger people they have been overwhelmingly among those with underlying health conditions, a fact that some feel should allow for most of society to return to normal activities at a quicker pace, while encouraging vulnerable populations to take extra precautions.

Likewise, while no state has been totally unaffected, the outbreak has remained highly concentrated. A recent study by Mr. Badger and Dr. Norbert Michel published by the Heritage Foundation pointed out that of the 30 counties with the most COVID cases, 24 are along the commuter railway that runs from Philadelphia to Boston, through Manhattan. In a related phenomenon, even in areas that once experienced very high levels of infection, such as Orthodox centers in Brooklyn, Monsey, and Lakewood, very few severe or even symptomatic cases have occurred for close to two months.

New York Governor Andrew Cuomo has allowed different regions and even counties to enter different phases as their COVID indicators point to a safer reality. The idea of further targeting lockdown and opening measures based on emerging realities is another factor that could help to usher in a “new normal” at a more rapid pace. Yet some have noted that the long-term effectiveness of a regional approach depends on government’s willingness and ability to control travel between areas that are at different points in the pandemic.

While COVID is likely to remain a health and policy challenge for some time, especially with remaining doubts over the nature of future waves, there is hope that massively increased testing capacity and efforts to initiate robust contact tracing could give government the tools to manage the threat without the draconian measures it has taken heretofore.

Mr. Badger added that in light of the enduring nature of the threat, it is essential that policymakers use their power carefully, in a way that does not endanger public trust. “It’s very important for government to maintain its credibility, and that’s something that happens when they advance effective policy and maintain a broad and realistic perspective,” he said. “There needn’t be a second wave, but there certainly will be more cases, and with what we’ve learned, planning for that shouldn’t mean that we have to lock everybody in their house again.” n