Prime ‘I Will Support an Uprising for My People’: Interview With Justin Terrell, Executive Director, Council for Minnesotans of African Heritage 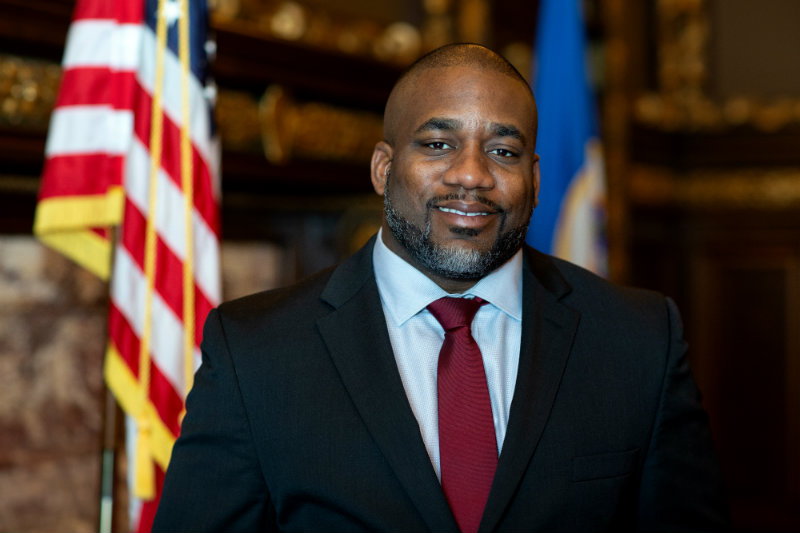 The death of George Floyd, a black man who died in the custody of Minneapolis police after an officer kneeled on his neck, drew condemnation and led to massive protests across the country and around the world. The protestors called for an end to what they deemed systemic racism in police departments and governments throughout the nation.

The protests featured peaceful demonstrations as well as violent riots, looting, assaults on law-enforcement officers, and the burning of a police precinct in Minneapolis.

On Sunday, May 31, following the first weekend of protests, Hamodia spoke with Justin Terrell, Executive Director of the Council for Minnesotans of African Heritage, a state agency.

What have the last few days been like for you and your agency?

We were in the middle of dealing with COVID-19 and getting ready for a special session to advocate for a set of policies that have come out of the black community that there’s been a little action taken on and we’re trying to just push these things over the edge and get fully funded in the special session. Then, on Tuesday we see this video, and it just upended everything.

And the worst part about it for us as an agency is just the emotional trauma of it.

I think that that’s part of what you’re seeing in Minnesota: that we just don’t have the bandwidth to deal with these kinds of things that are continuing to happen to my people.

The disparities here are so difficult: We make up over 40% of the essential workers and probably more than 40% of the unemployed impacted by COVID-19. We’re having a hard time getting resources to the community. And all of that’s compounded by watching a cop put his knee on someone’s neck. And I think people were just, we had nothing left. To ask folks to be patient in a situation where there’s no more patience. And part of that is because I think we know how this is going to pan out. In the history of our state, the only officer I can recall who’s ever gone to prison for killing an unarmed Minnesotan was a Somali officer who killed a white woman. We’ve seen all these cases in our community over and over again, and people are tired. I’m tired.

Four officers involved in the George Floyd arrest were fired, and the one who put his knee on Floyd was arrested and charged with murder. What more do people want?

We want justice. We want these officers arrested and prosecuted — we want the justice system to treat them like they treat us, basically. There’s no way you’re ever going to see a black man do what this man did, or what the other officers did, and get away with it — not even black officers; that’s been proven recently.

And beyond that, my interest isn’t just putting more people in prison, cops or not. My interest is actually transforming and reimagining the justice system. We need state Attorney General Keith Ellison to take the prosecutor’s seat on this; the community does not trust Mike Freeman, the current county attorney who, in his record on this particular subject, has only incarcerated one black officer for the death of a white woman.

So you are calling for the other three officers to also be charged?

It’s not specifically from our agency — as a state agency I have to be clear about what we’re calling for. The community is clear they want those officers arrested and charged. And we support the community’s position.

We’ve all seen the videos and media reports about the rioting and looting. What do you say about all that?

In a nutshell, you’ve got thousands of people in the street from the community. People are upset. I was in very close proximity with a lot of the folks who are out in the streets and making sure folks are safe and whatnot. But there was a small element of folks from outside the state who were executing tactics that were clearly organized.

What people don’t understand is, we love South Minneapolis. There’s no way our community would have been the ones taking the lead on burning down Lake Street — it’s completely gone.

There was a small element of folks from outside the state that came in to cause anarchy, and they were very successful in taking advantage of the community’s hurt and pain to burn down a major corridor in our city that is full of cultural diversity and beauty.

The third precinct [a police stationhouse set ablaze], I totally see the situation there, but how bad it got was instigated by folks who weren’t even from the community, and it surely wasn’t instigated by black folks.

People were upset — there were thousands of people out there. I think like a quarter of that crowd was filled with anarchists, and a quarter is all you really need to burn down a city.

I also feel that the Martin Luther King quote is completely applicable: “A riot is the language of the unheard.”

Something in Minnesota dramatically has to change.

What do you think of the fact that this Minnesota story has gone national?

I think it’s good for two reasons. One, we need people to pay more attention to these issues in the Midwest. You guys out in Brooklyn, and New York, on the coasts, you guys get all the coverage, and we understand why that’s the case. But Minnesota is a unique place because we have these horrible racial disparities, and I don’t think it gets covered enough. But the other thing about Minnesota is, we actually have a way to fix it here. We have one police union — New York has five! We just have a lot of opportunities to get this right.

So what do you think will emerge from all this, whether Minnesota specifically or nationally?

Let me start by saying that last night, the black community really showed up. We protected our property, people spent the night in businesses, we stood on corners, we organized different parts of the community who sometimes are forgotten about or seen as threats, we were able to organize them to protect corners and it worked. And so right now, we have a lot of momentum around independent political power in the black community. So going forward. I want that to be the story.

And frankly, to Gov. Tim Walz’s credit: [He] has been responsive to what we’ve put in front of him. And with a special session coming, as hopefully things die down, my hope is that on the other end of this we have some aggressive, aggressive changes to our criminal justice system specifically around policing. Because the way it is right now, I don’t think anyone feels safe, trying to get back to normal with the way things currently are.

Do you feel that the rioting and looting is hurting the movement and taking away from the message?

Legislators and bodies of government are systems that respond to those that call on them.

We call on our systems and they don’t respond. We’re seeing a change in that under the Walz Administration, but we’ve been calling on the system to respond to us for decades and we haven’t gotten one. And so, the outrage that we saw in the community with the rioting and burning stuff down has forced every part of the system to respond.

It seems to me, and correct me if I’m wrong, that you’re saying that the rioting may have been necessary to cause an actual response, whereas peaceful protest would not have worked.

What I’m saying is I don’t know what else would have been necessary. Because we’ve tried everything else.

So you don’t think peaceful protests work, and you think that rioting ultimately is the only thing that could have worked?

No, no. Here’s what I’m saying: We’ve made progress through peaceful protests. But we get these incremental steps, and we keep telling people that the system is not working for our people. And we get these incremental tiny steps. Do I think rioting is [OK]? No. I don’t want my city to burn. I love the city. We all love the city. And at the same time it’s like, I don’t know that we would be in a situation today, if we hadn’t had an uprising. And I will support an uprising for my people. I don’t support rioting and burning down our own property in our own neighborhoods.

Some people feel that the negative backlash against the images of rioting and looting may turn public opinion against the movement for change.

Here’s what story I know is not being told. What’s not being told is about the leadership in the black community and how we protected our communities last night. What the NAACP and community leaders did, recruiting volunteers to sleep in black businesses in black corridors in North Minneapolis. A local pastor organized neighborhood groups to protect the corner of 38th Street and Chicago Avenue, where the incident happened with Mr. Floyd.

Those kinds of things are not being talked about enough in my opinion. People are focusing on rioting. Of course there were black folks out there rioting, but there was an organized effort from the community to protect the community. And that is a story that’s not being told. I feel like if we talked about those things more, as opposed to just the destruction, people would understand that, yes, people were rioting and, you know, frankly, it’s justifiable to be in the streets. It’s not justifiable to cause destruction. But if people focused on what the community was actually doing, what our leaders were actually doing on the block, I don’t even think we need to talk about the effectiveness of a riot.

I don’t feel like that’s the question. I feel like the question needs to be, how are we fighting to protect our communities? Because too often, the story is about popular perception and whatnot, and not about the work.