Prime What We Are Waiting For 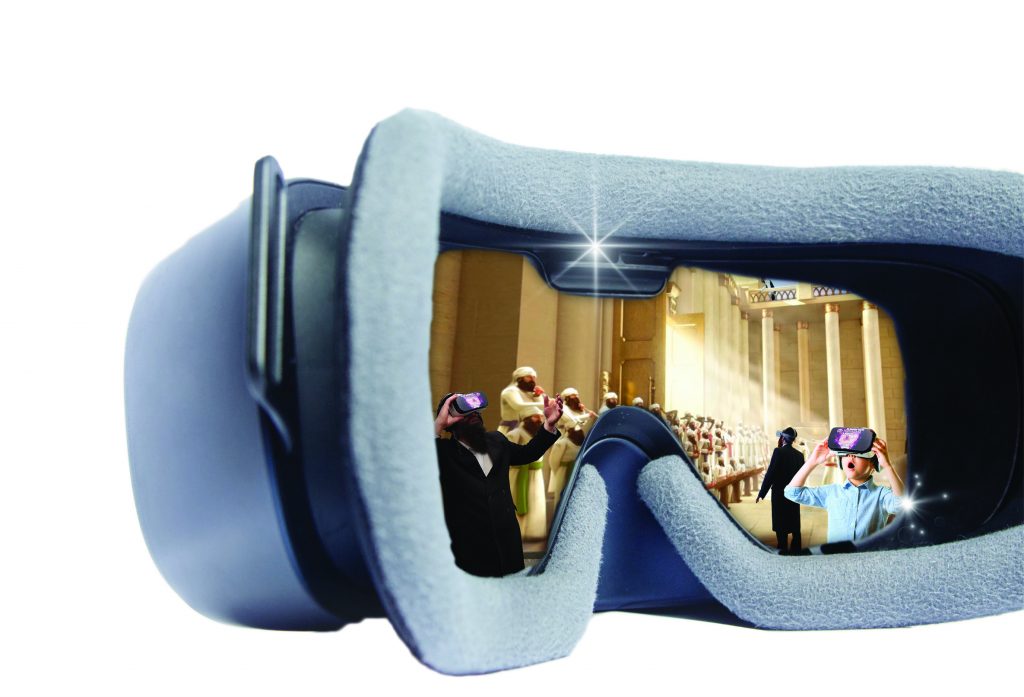 If there is an experience that reinforces the principle of “ein domeh shmiah l’re’iyah,” that there is no way to compare something one hears to something he sees, it is the virtual reality tour of the Beis Hamikdash.

After one puts on the large plastic goggles that simulate a 3D experience, for 20 minutes he is transported to another time and place that, for many, changes their perception of a central aspect of Yiddishkeit.

Rabbi Yossi Soble, a veteran Monsey-based mechanech who has become one of the lead promoters of the Beis Hamikdash Virtual Reality (VR) project, said that the experience is a valuable educational tool.

“We haven’t had a Beis Hamikdash for 2,000 years. We learn about it and we daven for it, but we have very little feeling for what it is that we are waiting for,” he told Hamodia. “To see what it was that was destroyed, what was lost, in such a real way, gives a person a whole new feeling of yearning for the Geulah.”

As the viewer wears the relatively large electronic goggles, a narrator guides him through the various stages and chambers of the Beis Hamikdash. Coming to appreciate the size and majesty of the structure fills one with awe.

“From the moment you put it on until you take it off, you’re in another world,” Rabbi Nosson Karpel Margulies, owner of a sefarim store in Kiryas Joel and another key promoter of the project in the United States, told Hamodia. “When I first heard about it, I wasn’t so comfortable with the idea of promoting a technology used for video games, but once I saw it, I realized that this was a way to make the Beis Hamikdash real for every Yid.”

The idea of using illustrative methods to make the Mikdash a tangible reality goes back centuries and even millenia. Rabbi Margulies cited pesukim in the Navi Yechezkel and a work of the Tosfos Yom Tov that put great effort into illustrating the details of the Beis Hamikdash.

“Chazal say that really, the world was not suitable for gold and that it was created only to beautify the Beis Hamikdash. It seems to me that there is a similar lesson here: All these technologies that come out are mostly used for things that are not what Klal Yisrael is supposed to be aspiring to, but if they can be channeled in a way to help people relate to something that has kedushah, maybe that’s really what it’s here for,” he said.

The VR project was conceived some five years ago by a kollel avreich living in Elad who chooses to remain anonymous. He spent close to 20 years studying details of the Beis Hamikdash and working to publicize ever more realistic representations of it.

When he learned of the capabilities of virtual reality, he approached a team of experts in the field to work on bringing his life’s work to a new plane. Over a period of a year and a half, he spent countless hours transforming the details illustrated in Tanach and Chazal, especially Masechtos Middos, Tamid and Yoma, into an accurate and moving VR production. Some three years ago, the project was first viewed in Eretz Yisrael and has since been brought to Europe and America.

“Even for many talmidei chachamim, the Beis Hamikdash is something that they learn about, but not something that they can fathom … the loss of,” the founder of the project told Hamodia. “… If we don’t understand what we are missing, how can we really daven for it?”

In addition to giving the viewer a sense of the layout and grandeur of the Mikdash, this software also provides a look at some of the day-to-day activities, like the removal of worms from wood for the Mizbei’ach.

One particularly impressive effect is a long segment in which a large ensemble of Levi’im play instruments and sing pesukim designed to inspire teshuvah. The solemn tune, together with the visually overwhelming sight of the long, multi-tiered line of Levi’im, leave a lasting impression.

“I have endless stories of the effect that the [presentation] has on people,” said Rabbi Soble. “Just this morning we took it to a camp and at one point a counselor said that he was about to cry. His friend responded that he was already crying.” 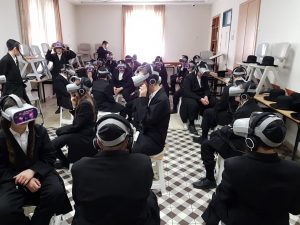 The VR has been brought to schools, camps, bungalow colonies, Chol Hamoed events and more.

In keeping with the founder’s goal that greater awareness of the Beis Hamikdash should receive a more prominent place in chinuch, in recent months, an educational expert worked with the project’s promoters to develop it into a full curriculum that can qualify for federal STEM and STEAM grants for science and technology. Its supporters hope to introduce a version of the curriculum in public schools in New York as part of the eighth grade’s study of ancient civilizations.

The project’s narration was originally done in Hebrew. However, over the last two years, three additional versions have been created. One of the alternatives is in Yiddish and two are in English, one geared toward those with a yeshivah background and the other to a wider audience.

The very diversity of its key promoters perhaps speaks to the achdus that will be”H bring the Geulah, as the VR’s originator is a Yemenite Jew with strong roots in the Litvish yeshivah world, Rabbi Soble is a Lubavitcher Chassid, and Rabbi Margulies a Satmar Chassid.

“[Seeing] how beautiful and majestic the Beis Hamikdash was and get[ting] a feel for what it would be like to have it again is something that can change your whole avodas Hashem,” said Rabbi Margulies. “The experience is something that can give a Yid a whole new understanding of what it means to yearn for Moshiach.”