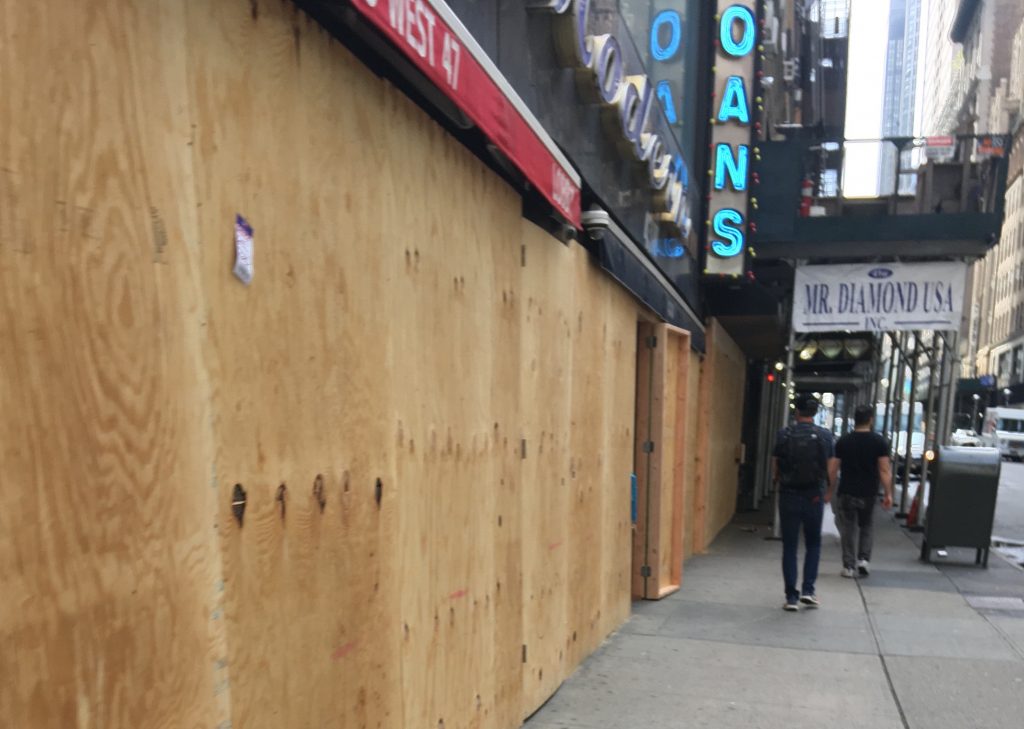 This week’s interviewees are diamond dealers Abe Fastag and Alexander Schaechter, spoke who spoke with Hamodia several days before the June 9 re-opening of the Diamond Dealers Club, the anchor of the diamond industry based around Manhattan’s 47th Street.

Take us back to mid-March, when the New York shutdown began.

It was pretty scary in the beginning in every industry. Unless you were in the medical field or in the food business or other essential business, you were closed. There was no getting around that.

I can tell you about myself personally. Not everyone did this, but about four weeks in, we did begin to operate on the phone. My brother, my father, and I, we’re a family business, and we started answering phone calls, and we would go into our office once a week just to take care of the mail, and try to send out few shipments.

Other parts of the country didn’t close down as we did; New York was much stricter than many other places. So there were jewelry companies open in other states, and we filled whatever orders we had for out-of-state companies, though it was very little. This wasn’t a slowdown; it was a shutdown.

Schaechter: Merchants like me sell merchandise to jewelry stores. Since the jewelry stores are not essential businesses, they were all shut down.

The importing was shut down; Israel and India were also shut down. The retail customer couldn’t make purchases, so the whole industry was closed.

I did not do any business at all during the shutdown. I am 67 years old, and I have not left my house during the past 10 weeks. I did not meet a single client.

Though stores were not allowed to be open, would there have been a problem with dealers just meeting one-on-one with the client, maybe in their home?

Fastag: The first four or five weeks, nobody really did that. People were very scared; a lot of people were dying. It was a different situation than it is now.

During the last six weeks, I have met some people, but the business is nowhere near where it was prior to the shutdown. Things are on hold.

It’s not that we’re in a bad place because something terrible happened to the economy. The economy was shut down like the engine of a car. When the engine is turned back on, the car will start working again. Of course, you’ll have to drive a little bit to get the engine moving and the gears back into shape.

Schaechter: I did not do any other business like internet sales, because, in order for me to be able to ship the merchandise, I would have had to go to the safe in Manhattan; all my merchandise is there. And I did not want to go outside.

For 10 weeks I have not made a single sale.

And here are the consequences: Since the jewelry stores did not have any business, even what [was] bought prior to the shutdown [was] not paid for. So not only have I not made sales now, but I have not gotten paid for previous sales.

And because they haven’t been open for the last 10 weeks, even once they do open, they have unsold merchandise so they probably won’t be buying any more for a while?

Schaechter: That is correct. And when [the retailer] does get a customer to buy something, he will use the money to pay his rent rather than paying his supplier.

By the way, my understanding is that the storefronts on 47th Street, which were closed anyway during the coronavirus shutdown, and boarded up now during the riots, have not been affected by the riots?

Fastag: That’s correct. I did go into work in Manhattan twice this week; most of the stores are boarded up as a precaution because the mayor wasn’t doing what he should have been doing. That’s a different conversation.

I happen to have seen a much stronger presence from the police on 47th Street. But that being said, people don’t leave any jewelry in the windows of the stores. Everything is locked up in safes every night. Insurance-wise, you must do it. You go into any high-end jeweler anywhere in Manhattan, he might leave a few trinkets in the window, but there’s no real jewelry there.

It’s not like an electronics store or sunglasses store or clothing store that leaves the merchandise out. They wouldn’t be able to get any merchandise anyway from a jewelry store. And the jewelry storefronts are bulletproof glass, not the sort that you have in regular stores, so they couldn’t do any looting, though I guess they could always try vandalism.

The Diamond Club is set to open Tuesday, June 9. What do you expect, in terms of people coming back, both dealers and customers?

Fastag: People will come back, there’s no question. After being locked up this long together, either you had some great times together or really bad times. A lot of jewelry comes into play when people need to make up.

From a business standpoint, globally, diamond mining, manufacturing, and shipping have stopped. So there is a supply shortage of goods, which has helped to keep some prices stable. The question is what will the demand be in the upcoming months? I guess we’ll have to wait and see. And nobody really knows that, because what happened here is not something that ever really happened before in this form — it’s not that the economy went into a recession for economic reasons; it was just put on hold because of a non-economic factor.

Schaechter: I think people may be less likely to buy luxury items like jewelry. And even if they need something, like for an engagement, they will spend less on a diamond than they would have in the past.

Also, I give stones to a cutter to cut. I don’t have any business for him now; I myself am not buying diamonds, for lack of revenue.

Even after the economy opens completely, the pandemic shutdown may cause certain industries to change permanently, for better or worse, in one way or another. Do you feel that this may happen to the diamond industry?

Schaechter: After the economy completely returns I believe this will be the last industry to pick up because it is a luxury item, but I do believe it will eventually get back to its former strength.

Fastag: I don’t see why it should change. Will things become, maybe, less person-to-person and more virtual? That’s been happening already before the coronavirus hit — diamonds have been selling via online and other avenues. [We are] not necessarily having to meet people because of the information that’s out there; with grading reports, you don’t necessarily actually have to see the stone. I think that’s something that evolved already before corona hit. So, in that aspect, I don’t think corona will necessarily make a difference.

But on another note, which we touched on before, my question is not about the diamond industry, but on the city as a whole: Will New York be the same New York after what we just went through? Are people are going to want to come here versus going to other places, after how our city was run during these riots, with our incompetent governor and mayor, frankly, who allowed this to happen the way it did?

A person comes to Manhattan and he wants to spend money on a high-end item like a diamond or other piece of jewelry. He wants to go to a place where he feels safe and comfortable. I came off the train in Manhattan, I thought I was walking down the street in certain parts of Brooklyn when I was a kid. Everything was boarded up. If that’s how you have to protect your storefront after not getting the kind of backing that the city and the government should have given us all along, but you have to board it up because you’re afraid that they’re going to destroy your store, what kind of image does that give to New York City as a whole? In my opinion, that’s how this conversation should end, with this question to the politicians: What were they thinking?

And that’s what worries me in a way more than anything in the industry because diamonds will always be valuable. There are ups and downs like with every commodity. But when you have a situation like we had in the city — as it is we were going through some difficult times with corona. But not to keep up the image of the city the way it was and let it fall into disarray the way they did? I think that’s the biggest question for the future.