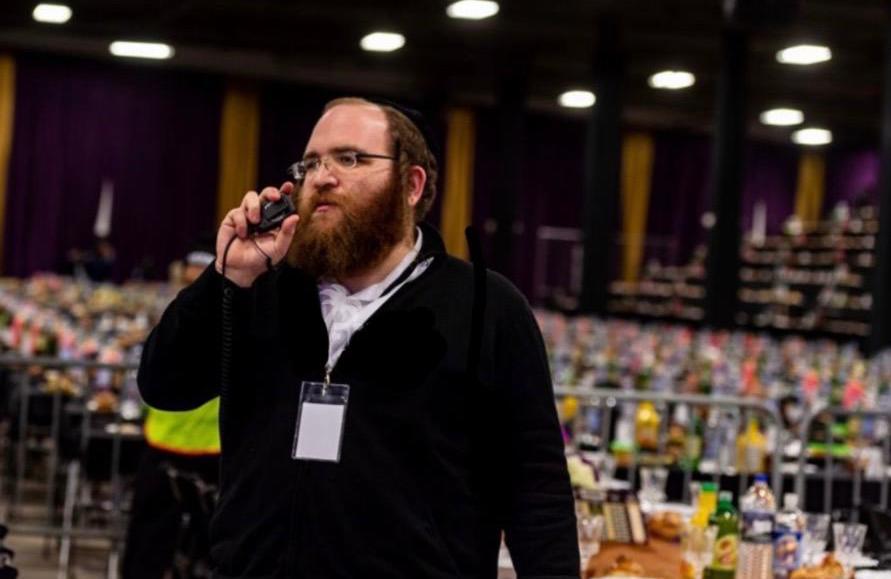 The coronavirus pandemic and resulting shutdown have thrown the U.S. economy into turmoil and led to record numbers of unemployed.

In this weekly column, Hamodia speaks with someone from an affected industry.

This week’s interviewee is Eli Friedman, a New York-based party planner who arranges events throughout the tri-state area.

Tell us about your company, Eli Friedman Productions.

We cover all facets of party planning, at events large and small. We do catering, décor, arrange orchestras, take care of cleanup — everything.

Even in wedding halls, which have their own caterers and managers, sometimes, at higher-end weddings, people will hire a party planner to arrange a Viennese table or do flower arrangements.

What types of events do you do besides weddings?

My main business is Shabbatons, weekend events. For the past five years, I have done the planning for Shabbatons and conventions of most Chassidishe organizations, as well as business getaways, including Keiravtuni, ATime, Hamaspik, Shas-a-Thon, Satmar, New Square, Mikva USA, Kesher Nafshi, BFG, Allure Group, and Fidelity.

What sort of work does arranging such an event entail?

When a customer calls and says they want to do a weekend event, we find a hotel for them and take care of the room list where each guest sleeps; we provide all the food — depending on the event, I’ll either hire a chef and kitchen staff and we’ll do the cooking ourselves, or I may hire a caterer to take care of the food; we do the décor, and we take care of the entire program, including speakers, music and singers. We also arrange welcome packages and goodbye packages for the guests. In other words, everything from beginning to end.

What are the smallest and biggest events that you have done?

The smallest event was for 25 people. I usually don’t do events that small — my minimum is usually 200 people — but this was for a particularly good customer. It was a reunion event for 25 business people who went away for one night.

How has the coronavirus shutdown affected your business?

I’ve had several large events canceled. Satmar was planning to hold a siyum for over 2,000 people; I had booked a big venue for that event. I also had three weekend events that were planned for around now — many organizations specifically do these Shabbatons during Sefirah, because there are no simchos during this time. These have all been either postponed or canceled.

During the shutdown, there are no big events, and no weekend events. Even if someone does an event, it’s just a one-night affair for a very small number of people. And even for those events, people will not spend a dollar more than they need to. For example, if someone was planning a sheva brachos for 200 people with a 10-piece band, now that he is only inviting maybe 20 people, he’ll just get one singer and a one-man-band, and he is not interested in fancy décor or flowers on the tables. People don’t want to spend lots of money on such a small event. And of course, people also aren’t spending as much because the economy is hurting.

My overhead costs, of setting up a kitchen and hiring staff, is not all that different for 20 people than it is for 200. Obviously, we use fewer waiters, but overall, the overhead costs are pretty similar, and the payoff is in the per-guest charge. But right now, there are very few guests being invited to the few events that are actually being held.

What sorts of events have you been able to do during the shutdown?

Have people been making weddings during the shutdown, or are they postponing them?

I have been getting calls for weddings constantly. I’m not sure what others are doing, but everyone I know who has a wedding scheduled, is going ahead with the wedding. They will find some way to do it, like in a backyard with a few people. But they are not postponing the weddings.

But I have not been doing these events, because I don’t want to get into any gray areas. Legally, gatherings of any size are banned. If someone has a wedding for just a few family members in their own backyard, it’s probably something of a gray area, and I decided I don’t want to go there at all.

Another reason I decided not to do these backyard events: Baruch Hashem, I have been successful, because customers are satisfied after my events. But I think that after these events, people won’t be happy anyway because it is less than ideal.

So you feel it’ll hurt your brand to do jobs that will necessarily be subpar, and therefore you have not done any backyard weddings?

But I have done some small bar mitzvahs and Lag BaOmer parties in people’s homes. If it’s just a small thing like a family reunion, maybe 10 or 12 people, I don’t mind doing that. But any kind of bigger event, where they’d have to invite other people, and cars would be coming and going, I am not getting involved in at all.

During this shutdown, my business is 95% gone.

Do you have workers on payroll, or do you hire all your workers on an event-by-event basis?

Everybody is hired by-event; I don’t have anyone on payroll. So baruch Hashem, I did not get hit that way.

Just to get a sense of how many people are affected by the closure of the party planning industry, can you tell us how many workers you hire for a typical event?

For an event of 500 people, we’d have anywhere between 30 and 45 workers, approximately half kitchen staff and half waiters.

There’s talk that even once everything reopens, people may have gotten used to the idea of having smaller affairs, like backyard weddings, etc.

I don’t think that’s going to happen, but I believe that people may cut expenses a little.

I have been talking to a lot of chassanim and kallos; for them, this is a one-time, special event, and they are expecting a decent chasunah. I’m not talking about a 10-piece band and a 10-piece choir, or the fanciest venues or most ornate flower arrangements — but a standard event, that they can have their family and friends come to their wedding. Even people who want to make cheaper weddings, they want to have close family members and neighbors share in their simchah. It’s a chassan and kallah, it’s a once-in-a-lifetime event; we’re not talking about spending a huge amount of money, but they will want the basics. The idea that people will start making weddings in their backyard with 20 or 30 people, I don’t think that’s going to happen.

I do believe some things may change. People may realize they can make weddings at 3 or 4 o’clock in the afternoon instead of at 8 or 9 o’clock. There are other changes people may make to save money. I think people may get used to more inexpensive events, and not spend so much money on décor. For weekend events, sometimes people spend $20,000 or $30,000 between lighting and flowers; that may now change. People will spend less on the food; maybe instead of having beef they will serve chicken. Maybe if someone used to make a wedding for 200 couples, now they’ll decide they only need to invite 150.

So people may cut certain aspects of affairs, and a move toward cheaper events will of course affect my business as well. And some people may decide they don’t need an event planner, but just hire a caterer themselves, and call a flower place themselves, etc. But I don’t think it’ll happen that much, because most people don’t want to be busy at their own event with caterers and waiters and the flower guy and the lighting guy and the musicians; they will still use an event planner for that.

Finally, have there been any silver linings for you in the shutdown, personally or professionally?

I believe in Hashem, and everything that happens is good. Even if we can’t always see it right away, hopefully we will see it soon.

I’ll give you one example. Before Pesach, there were several very rich people who were planning to do huge events in exclusive halls. I was not hired for their jobs. But because the halls are shut, they hired me to do a small event in their home, baruch Hashem. So yes, we can always find good in things.

I believe in Hashem, and I am 100% sure that whatever happens now is for the best, for everybody.