Prime Obtaining and Maintaining the Simchah of Simchas Torah 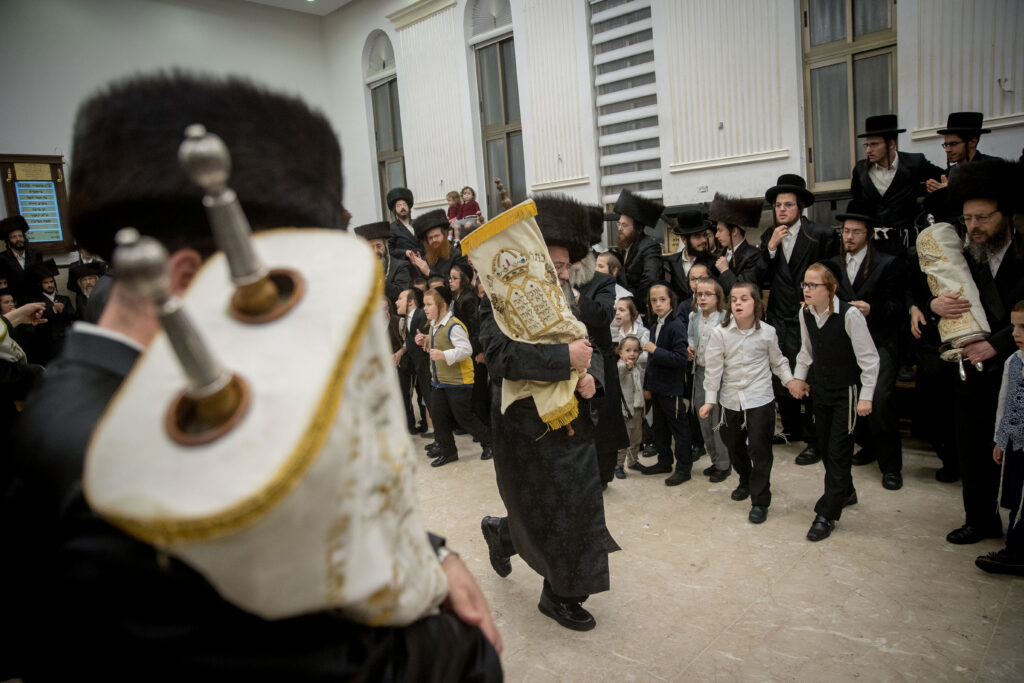 Simchas Torah is the happiest day of the year. If so, why do we lein about one of the saddest events in Jewish history — the passing of Moshe Rabbeinu? Perhaps we can answer this question with the answer to another question. Tosafos (Megillah 31a, L’machar) states that Rav Hai Gaon established our custom to lein on Simchas Torah the haftarah of Vayehi Acharei Mos Moshe from the beginning of Sefer Yehoshua. Why is this haftarah so important that it preempts the haftarah from Melachim Alef prescribed by the Gemara? (Tosafos asks what right did the Geonim have to not follow the Gemara? The answer is beyond the scope of our discussion.)

The sefer Ein Eliyahu in the name of the Panim Yafos explains the great significance of this haftarah as follows. As long as Yehoshua Bin Nun continued to teach the Torah that Moshe Rabbeinu brought down from Har Sinai, it was comparable to Moshe Rabbeinu still living. So, by leining this haftarah we hint to the fact that although Moshe physically is no longer with us, b’ruchniyus he remains very much alive and well. Therefore, it is critical that immediately after leining about the passing of Moshe Rabbeinu, we read about his talmid who continued his legacy. With this yesod we can answer our original question. We dance because despite the passing of Moshe Rabbeinu, Torah continued through Yehoshua and continues to flourish until this day. There is no greater simchah than that.

This helps us answer another question. How at the end of zman simchaseinu do we recite Yizkor for parents who are no longer with us? The question is even stronger in Eretz Yisrael where Simchas Torah is celebrated on the one day of Shemini Atzeres. After dancing during Hakafos and then completing and restarting the Torah — the happiest hours of the entire year, how do they recite Yizkor — a very sad tefillah about loved ones who have passed away? Isn’t this a tefillah that is the exact opposite of zman simchaseinu?

The answer is the same yesod. When a parent passes away, there is no greater simchah and aliyas neshamah than when a parent has a child who continues in the Torah ways of his or her parents. The recitation of Yizkor and acts of chessed through the tzedakah pledged at that time continues the chain that began at Har Sinai. It is a fulfillment of the first words of Pirkei Avos — learned every six weeks during the past summer — Moshe kibeil Torah me’Sinai u’masarah l’Yehoshua. We read about the beginning of this chain in the Krias HaTorah and haftarah of Simchas Torah, the second day of Shemini Atzeres — and with Yizkor recited on the same Yom Tov — whether on the first or second day, we demonstrate the continuity of this chain — over 3,300 years later. No other nation on earth has such continuity. Indeed, it is the greatest simchas HaTorah when we prove the words that we dance to during Hakafos — Moshe emes v’Soraso emes. The chain does not only continue with children but also with students and anybody who one is mashpia l’tov on, including grandchildren, nephews, nieces, neighbors, co-workers, and friends.

However, the continuity of the chain of Torah alone is not enough to properly rejoice. What allows us to fully rejoice was eloquently described over 60 years ago by Harav Shalom Rivkin, zt”l, beloved first cousin of my father, z”l, who would later become the Chief Rabbi of St. Louis and whose 10th yahrzeit was on the 4th of Tishrei. He explained a three-step process to simchas haTorah. First, one must know and understand with what he is rejoicing. Jews in every generation who rejoiced the most on Simchas Torah knew it and studied it in depth. However, knowledge itself is not enough. The proof? Did you ever see a mathematician dance with his math book or a chemist dance with his test tube? There must be additional conditions to create such an abundance of joy.

The second condition is that one must be convinced of the importance of Torah and that only a life of Torah and mitzvos has relevance. As Rabi Akiva noted in the famous mashal with the fox and fish, life without Torah to a Jew is like being a fish out of the water. Ki heim chayeinu — Torah is our only life.

The third condition is that one must be ready to undergo mesirus nefesh for Torah. When a person sacrifices time, money, sleep, and comfort for limud haTorah, their accomplishments are that much more valuable and the simchah, greater. It is a basic human trait to be emotionally tied to something to the degree that one has suffered to obtain it. Why are parents the happiest people at a chasunah? Because no one has sacrificed as much as they have to reach this point.

Why is the simchah at a wedding of an older chassan and kallah so palpable? Because the mesirus nefesh and suffering they underwent to arrive at that chuppah makes the simchah that much greater. This also explains the famous statement of Chazal, “Whoever mourns the Churban will see its simchah when the Beis HaMikdash is rebuilt.” The simple explanation is that the mourner will merit to see the binyan bayis. Rav Rivkin explained it is a metzius which means, only he who cares about Yerushalayim deeply enough to mourn its loss is capable of truly rejoicing for the rebuilt Yerushalayim in the future. If one doesn’t really care and did not suffer, what simchah can he possibly feel?

Simchas Torah — the crown jewel of zman simchaseinu and the culmination of the Yamim Nora’im — gives us the opportunity to continue the great chain that began at Har Sinai. This can be accomplished with Simchas HaTorah — which comes through constant study year-round, knowing it is the most important part of our lives, and the basis of our family, community, and all of Klal Yisrael. Is not all of Jewish history one great long testimony to the Yid’s readiness to sacrifice it all for Torah?

May this simchah propel us through the long and cold winter — symbolic of the long and dark galus, so that we can come to the chag haGeulah with the coming of Moshiach Tzidkeinu bimheirah b’yameinu.n

Rabbi Dovid Heber is the Rav of KAYTT-Baltimore and a kashrus administrator at Star-K. His new book, The Intriguing World of Jewish Time: Fascinating Zmanim and Calendar Calculations, is now available at Jewish bookstores.