Prime A Shot in the dark: The Search for a Coronavirus Vaccine 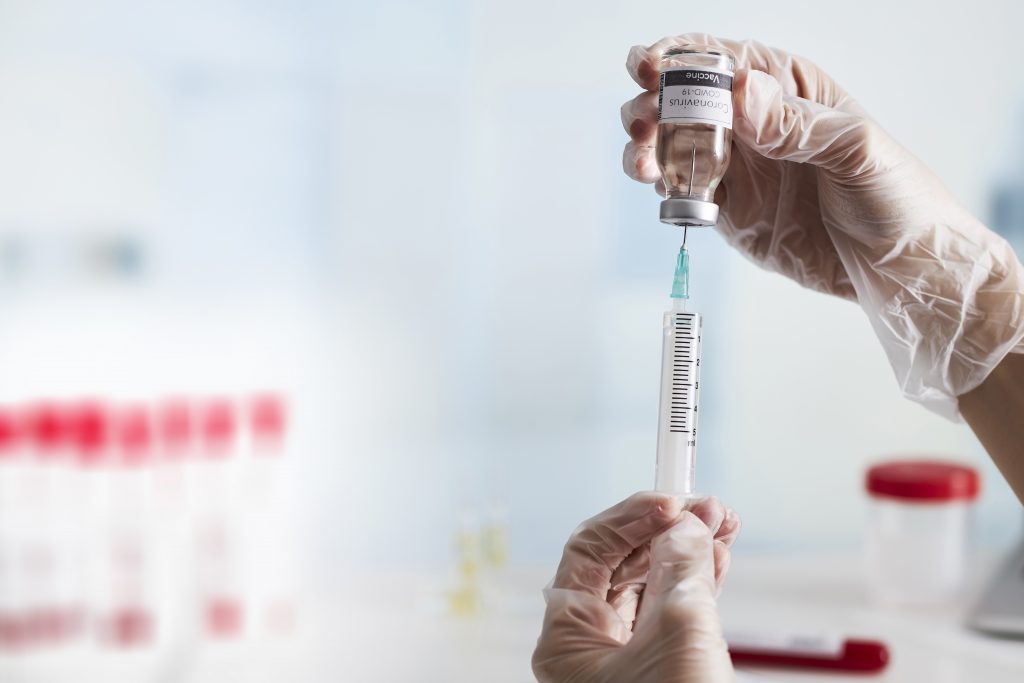 Perhaps never before has there been worldwide dedication to a single scientific goal.

Yet as the spread of COVID-19 continues to infect and kill ever-higher numbers of people, leaving untold economic turmoil and disruption of daily life in its wake, government, philanthropists, researchers and industry are united in a mad dash — all under the anxious eyes of the world’s population — to develop a vaccine that could put an end to the worldwide coronavirus epidemic.

While extreme social distancing measures have proven effective in slowing COVID-19’s march, its crushing effects on business and the extent to which it has upended nearly all aspects of life make individuals and governments eager to find a safe way to roll back from a state of international lockdown.

Recent weeks have brought some promise of more effective therapeutic methods of treating the virus as well, with positive test results on Remdesivir attracting a good deal of public attention and hope.

Yet, with much uncertainty about the effectiveness of potential treatments and even less known about COVID-19’s future trajectory, an increasingly repeated mantra is that development and widespread use of an effective vaccine is the only thing that can return us to the much-craved state
of normalcy.

Teams of scientists around the world are working on different vaccine options with more financial resources than any such effort in the past. Still, speeding up a process that typically takes four to five years likely means that, even under the best of circumstances, a vaccine will not be a ticket to normalcy anytime soon.

In an effort to prove this assumption wrong, President Trump and his administration have committed billions of dollars to have a COVID-19 vaccine ready in record time. Under the given title of “Operation Warp Speed,” the endeavor is harnessing private industry, military and other government resources to streamline the process and speed up development, testing, and production. Despite repeated statements from National Institute of Health chief Anthony Fauci that a vaccine is likely 12 to 18 months away, the president has on occasion said that the project’s goal is to have enough to inoculate America before the end of 2020.

He is not the only one stirring ambitious hopes.

A team of researchers associated with England’s Oxford University said that, based on the results of an ongoing clinical trial with 500 human participants, it held out an 80% chance of having a vaccine available for the market as soon as September. American pharmaceutical giant Moderna has also already moved to testing in humans. Many say that the sheer number of labs experimenting with different means toward a common goal raises exponentially the chances of accelerated success.

Yet, experts caution the public not to expect to be rolling up their sleeves for a COVID-19 shot anytime soon.

“This is not going to happen quickly,” said Dr. Naor Bar-Zeev, Director of Epidemiology at John Hopkins’ International Vaccine Access Center. “There are close to 100 vaccine candidates in development right now and the hope is — and it is not more than hope — that two or three of them will come through. But that will take a minimum of two years and even then it will have to be produced on a scale never done before, so even once a vaccine has been developed it will be quite a while before it will reach your arm.”

Given the inherent risks involved, vaccines undergo a rigorous three-part testing period before reaching the market. Phase one is tested on a small trial group in different amounts to check for the product’s safety and to establish the dosage. The second stage gives the vaccine to hundreds of people of varied ages and health backgrounds to test its effectiveness against the disease. In phase three, thousands of people who are at risk of exposure to the virus are inoculated to study the extent to which the vaccine reduces levels of infection. This step is typically the longest, and none of the present COVID-19 vaccines have entered it.

The administration’s plan is partially aimed at combining testing phases in order to accelerate the process, something the Oxford study has already done. The massive investment is mirrored internationally, and a multi-nation fundraiser yielded billions in committed funding. Private philanthropy has also taken an interest, most notably with the Bill and Melinda Gates Foundation’s commitment of $125 million.

Jason L. Schwartz, Assistant Professor at Yale University’s School of Medicine in Health Policy and Management, said that the wide interest and investment in development would be helpful, but he cautioned against depending on a given timetable.

“The bottom line is that any estimate, whether its 12 to 18 months, or longer or shorter, is a total guess,” he said. “Under the best of circumstances, there are usually failures and setbacks along the way. The incredible amount of money and energy being put into this can do a tremendous amount of good and the more teams working on it in a coordinated way the better, but the horse race announcing of who is in the lead is basically a distraction, and more for shareholders than to give the public useful information. Anything that’s ahead today could be proven ineffective tomorrow.”

In addition to the many scientific obstacles, a challenge that is equal to making a vaccine available in short order is the lining up of materials and facilities that can mass-produce it once found. Many of the optimistic predictions being reported end at laboratory success, but leave out this vital last step.

“With extreme effort and massive investment, a vaccine could possibly be made to scale in 2022, but the odds of it happening before that are near zero,” said David Ridley, Director of Duke University’s Health Sector Management program.

The stumbling block to mass delivery stems from researchers not knowing whether a vaccine will prove effective until after a year or more of testing. As such, firms are unwilling to invest resources, much less produce the formula, on the high probability that it will never pass final muster or win FDA approval.

One major effort being made by the Trump administration as well as by the Gates Foundation and others is an extremely costly attempt to mitigate this impasse by committing to buy large amounts of promising vaccine formulas before they reach the finish line. The result will almost certainly lead to factories producing vaccines that will never be used, but should one of those pre-ordered vaccines prove successful, this approach would significantly cut down the timeline of mass delivery to the public. The challenge is multiplied by the global nature of the pandemic, meaning that the ultimate goal would be the production of billions of doses in order to achieve worldwide herd immunity.

“I’m enthusiastic about the efforts to make an advanced market commitment, and if government and foundations are willing to pledge tens of billions for this prize, I think manufacturers will invest heavily. But those promises have to be credible and large,” said Prof. Ridley.

The Quickest Route, But No Shortcuts

With pressure from government and desperation from the populace, researchers and manufacturers are likely eager to produce at record speed — a combination of self-interest and altruism. Yet, cutting corners in developing a product that will interact with the immune systems of millions, if not billions, of people is obviously not a preferable approach.

Despite the unique demands being made of pharmaceutical companies, experts were confident that regulatory bodies would remain loyal to their mission of ensuring that products are safe and effective before they are released to the public.

“The FDA has a delicate balancing act as we saw with diagnostics, where it was first criticized for being too slow to approve products and more recently for being too fast and loose in approving diagnostics. We will face similar trade-offs with a vaccine, but I have high regard for the FDA. They will be under pressure to move fast, but they have a strong record on approval and I think they will live up to it,” said Prof. Ridley.

The need for high standards of safety goes beyond protecting the public from a potentially dangerous COVID-19 vaccine. Of equal importance to some experts is forfending any potential backlash against the integrity of immunizations in general.

“I am confident that the FDA will not allow an unsafe vaccine to reach the market,” said Dr. Bar Zeev. “Unsafe vaccines do a lot more damage and even if they are largely effective, it erodes trust in the vaccine system, so we can’t afford any shortcuts.”

While ensuring safety and protecting the integrity of vaccines is paramount to researchers, in light of the novelty of the present coronavirus and with research ongoing despite so many unknowns about its very nature, certain types of risks might have to be accepted.

“Speed has trade-offs,” said Prof. Schwartz. “We need it to be safe and effective, but we will likely have to move forward without knowing how long the immunity the vaccine gives is going to last. That’s something we are only going to find out over time, but it’s the type of trade-off that can be made.”

Some aspects of the virus and the sheer lack of clear information scientists have about it play a significant role in challenges to develop an effective inoculation. Unlike measles, mumps, and other such illnesses which induce long-lasting immunity, immunity to coronavirus may end up being more transient. This raises the performance bar expected of any potential vaccine. It has to achieve immunity that is durable, or has to be delivered on a repeating basis. Crucially, it also has to work well in the elderly, whose immune systems become less responsive with advancing age.

Another challenge is that results from research on vaccines from past coronavirus epidemics such as SARS and MERS where, in some trials in animals, experimental vaccination “enhanced” or ended up strengthening the illness. At the same time, the fact that this initial research has already been conducted on these cousins of COVID-19 gives scientists somewhat of a head start, and alerts them to these potential risks.

When buoyed by optimistic projections of delivery of a vaccine in the coming months, statements by public health officials that it will provide the only route to a long-term return to pre-COVID-19 life seem tolerable. Yet, with an open-ended timetable, that reality is more difficult for many to accept.

“I think that coronavirus will be with us for years to come,” said Prof. Schwartz. “This is not a short-term battle, and I think that a vaccine is the thing that will end the type of societal disruptions we are seeing. As much as we talk about accelerated timetables, we have to be careful not to create a false optimism over the next few months, and need to continue proceeding as if this is not a weapon we will have at any foreseeable time.”

Some options for a way out of the pandemic are even more jarring than the destruction it has already wreaked. Should the level of infection spread to a majority of the population, that could deliver herd immunity on its own, but the cost in sickness and lives is not one that anybody would like to contemplate.

Even short of this doomsday scenario or a usable and available vaccine in the next year or so, Prof. Ridley did not see either as the only paths out of the pandemic.

“A vaccine could play a very important role, but we have had success against other infectious diseases without a vaccine with a combination of tools, including behavioral change, testing, and effective therapeutics,” he said. “We need to keep working on all of them, and we could make a lot of progress.”