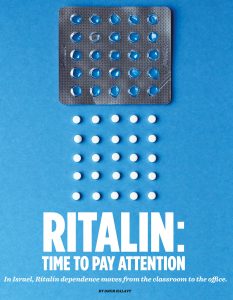 In Israel, Ritalin dependence moves from the classroom to the office.

Israel has often been called a “little America,” but that isn’t always for the best. Just as there is a “Ritalin epidemic” in the United States, according to many, there is one in Israel as well. According to government statistics uncovered by a watchdog group, nearly a million prescriptions are written annually for methylphenidate, most commonly sold in Israel as Ritalin — this, in a country of some eight million people. And according to one expert in the medical field, things are only getting worse.

“There are plenty of incentives for doctors, especially private doctors, to write prescriptions for Ritalin, whether the patient has ADHD, or wants it for some other purpose,” according to Dr. Barry Canon, a member of the Royal College of General Practitioners of England and a specialist family physician in Israel for the past 40 years. “The medical establishment has been prescribing these pills for years, without regard for the consequences, and they are creating generations of addicts, starting from the early grades all the way to the top levels of the business world. I predict we will soon begin to see the first lawsuits as adults who are dependent on these drugs start to see the side effects and consequences of their addiction.”

Data uncovered by the Israeli Movement for Freedom of Information covering the last four years indicates a sharp rise in the number of prescriptions written for Ritalin — not necessarily for children, but for adults. The numbers were culled from statistics of the four public health maintenance organizations in Israel — Clalit, Maccabee, Meuhedet, and Leumit — which were provided only after the Movement filed a Freedom of Information petition which, had the HMOs not responded, would have landed them in court.

According to the figures from the Clalit and Maccabee HMOs (the largest in Israel, covering about 75 percent of insured Israelis), 904,453 prescriptions for Ritalin, Aderall, and/or their generic equivalents were written in 2016 — 30 percent more than in 2012. Of those, 64 percent were written for males and 36 percent for females — but the “growth rate” in prescriptions for women was greater than for men.

But a 16-year-old who takes Ritalin today is likely to turn into a 26-year-old — and even older — who takes Ritalin as well, said Dr. Canon. “Personally, I have limited prescribing Ritalin to children in the younger grades, where they may need practice in learning how to concentrate. That’s who this drug was designed for, and I have gotten many requests from parents of older people — and adults — for prescriptions that I turn down.” Not all doctors do, however — and a dependency is fostered that must be “fed” later on in life, Dr. Canon added.

Most famous as a treatment for ADHD (Attention Deficit Hyperactivity Disorder), Ritalin is one of several stimulants based on methylphenidate. Of the various brands, Ritalin is the most frequently prescribed. Perhaps surprisingly, doctors are not quite sure exactly how Ritalin works in the brain, but they do know that it allows better use of dopamine, a brain chemical that acts as a messenger between brain cells. As scientists better understand the role of dopamine, they find that it has an important impact on many aspects of brain function, from movement to moods to motivation, as well as attention and reinforcement. Ritalin essentially increases the levels of dopamine and norepinephrine, another brain chemical, enhancing attention and motivation in the brains of individuals who suffer from ADHD.

ADHD has been known and diagnosed as a condition since the early 20th century, but has not been really well known, either among doctors or patients; not too long ago, kids displaying ADHD-associated behaviors would be “diagnosed” as “not having enough zitzfleisch.” Awareness of ADHD as a condition that affected a significant number of children grew in the 1980s and 1990s — and with it a rise in treatments based on Ritalin, which since the 1930s had been prescribed as a stimulant. Recent technological advances that enabled scientists to examine brain function in real time showed that Ritalin had a physiological effect on the cortex, the cerebellum and the basal ganglia — the areas of the brain known to be associated with ADHD.

For many parents, Ritalin is a last option for children who just cannot seem to concentrate in school. But medical need is far from the only criteria for parents — or educators. For some, said Dr. Canon, it’s a first, or at least preferred, option. Among many school officials, “Ritalin use is encouraged because the system wants high-performing kids, as well as ‘industrial quiet’ so teachers can do their jobs. Maximum results with minimum effort is the mantra.”

The same pattern prevails as children get older, on through adulthood. While the drug can indeed help children in younger grades concentrate and focus at a most critical time, older students, as well as adults, have “discovered” Ritalin and look to it for “extra concentration power” in order to get through tests, interviews and other critical life events. “Students are taking Ritalin to pass tests, and I have parents asking me to prescribe it to their teens so they can get into better high schools. In some high schools in north Tel Aviv, you have the majority of kids on Ritalin, not because of ADHD, but to help them focus on their studies. The phenomenon has become so common that one of the questions on the IDF’s medical forms for new recruits is whether, and how long, they have been taking Ritalin,” said Dr. Canon.

The Ritalin “plague” has not passed unnoticed in the chareidi community, either. “It’s the same for talmidim who want to get into top yeshivos,” said Dr. Canon. “They need to focus on their learning to pass the bechinos, and parents come crying to me that their kids need Ritalin to pass their bechinos and get into the right yeshivos; otherwise they will not get a proper shidduch.”

The statistics published by the Movement for Freedom of Information reflect only data released by Israel’s largest public health maintenance organizations, but according to Dr. Canon, there is a significant market in Ritalin prescriptions among private practitioners as well. While a doctor at a public HMO could “get away” with telling a parent or patient that they are not getting Ritalin, the likelihood that a private doctor would do the same is far lower. “A private doctor might charge NIS 1,000 for a visit, and patients paying that kind of money expect to walk away with what they paid for. So any patient who gets turned down at an HMO is going to get the prescription they want anyway.”

And many of those who go to private doctors for prescriptions can indeed afford those thousand shekels. “The rat race has definitely arrived here in Israel,” said Dr. Canon. “The high-tech world pays well, but it demands dedication and sacrifice in the form of long hours and high levels of commitment to work. To get ahead in that world, many sacrifice sleep and family — and they use Ritalin to laser-beam their focus on getting the job done. It’s all about being a success.”

But Ritalin dependency is hardly a “victimless” addiction. “There are consequences to being dependent on a drug like this,” said Dr. Canon. According to the National Institute on Drug Abuse, prescription stimulants may “have a calming and ‘focusing’ effect on individuals with ADHD,” but there are risks in getting overly dependent on them. “They can lead to malnutrition and its consequences. Repeated abuse of stimulants can lead to feelings of hostility and paranoia. At high doses, they can lead to serious cardiovascular complications, including stroke,” the NIDA says.

But forget the possible direct consequences of Ritalin abuse; the indirect consequences could be far worse. “People are taking these pills so they can better focus and concentrate and succeed, but what happens when they have a heart attack from all that success? If they are driving themselves to succeed by taking Ritalin, they may find themselves taxing their body beyond what it is capable of. Ritalin is often pushed as a drug that has only benefits, no consequences, but that is not true. Ritalin is a controlled prescription drug for a reason, and you cannot keep prescribing a controlled drug without running into some trouble. I see the Ritalin issue as a repeat of the opioid epidemic. People are going to have heart attacks, and then the lawsuits will begin.” n