Prime Living on the Red-Eye 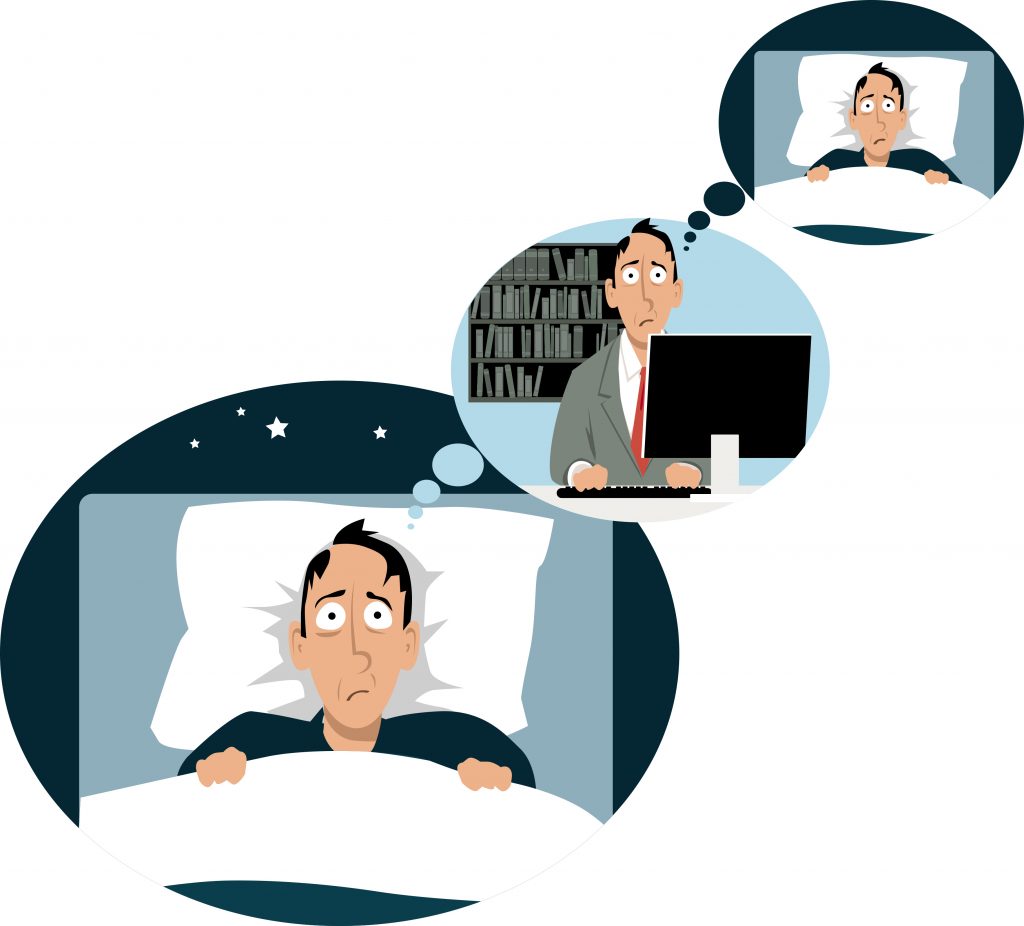 (The Washington Post) – In rhe screen-lit bustle of modern life, sleep is expendable. There are work emails to answer, homework to finish, social media posts to scroll through. We’ll catch up on shut-eye later, so the thinking goes — right after we click down one last digital rabbit hole.

Brain research, which has pushed back hard against this nonchalant attitude, is now expanding rapidly, reaching beyond the laboratory and delving into exactly how sleep works in disease and in normal cognitive functions such as memory. The growing consensus is that casual disregard for sleep is wrongheaded — even downright dangerous.

Preschoolers who skip naps are worse at a memory game than those who snooze, even after the children “catch up” on sleep the next night. An alarming new line of research suggests poor sleep may increase the risk of Alzheimer’s, as even a single night of sleep deprivation boosts brain levels of the proteins that form toxic clumps in Alzheimer’s patients. All-nighters push anxiety to clinical levels, and even modest sleep reductions are linked to increased feelings of social isolation and loneliness.

“It used to be popular for people to say, ‘I’ll sleep when I’m dead.’ The ironic thing is, not sleeping enough may get you there sooner,” said Daniel Buysse, a professor of sleep medicine at the University of Pittsburgh.

The research is changing policy in some areas, with school officials, for example, considering whether to push back school start times to better match teenagers’ sleep cycles. The National Sleep Foundation held its first consumer expo in March 2018, with offerings ranging from mattresses to sleep trackers — a visible sign of the burgeoning sleep industry. Meanwhile, a growing number of scientists, not normally known for being advocates, are vigorously preaching the message that lack of sleep is an escalating public health crisis that deserves as much attention as the obesity epidemic.

“We’re competing against moneyed interests, with technology and gaming and all that. It’s so addictive and so hard to compete with,” said Orfeu Buxton, a sleep researcher at Pennsylvania State University. “We’ve had this natural experiment with the internet that swamped everything else.”

The sleep research community, formerly balkanized into separate sleep disorders such as insomnia and sleep apnea, has begun to coalesce around the concept of “sleep health” — which for most adults means getting at least seven hours a night. But time in the sack has been steadily decreasing.

In 1942, a Gallup poll found that adults slept an average of 7.9 hours per night. In 2013, the average adult had sheared more than an hour off that number. In 2016, the Centers for Disease Control and Prevention reported that a third of adults fail to get the recommended seven hours.

For most of human history, scientific understanding of sleep was limited to asking people how they felt afterward. The discovery in the early 1950s of rapid-eye-movement sleep, when the brain crackled with electrical activity and dreams, changed the field forever. Electroencephalography (EEG) research revealed the sleeping mind cycles through active stages of light and deeper sleep that repeat about every 90 minutes.

For years, animal studies have shown that learning activities are reactivated during sleep, a critical part of how lasting memories are formed. More recently, Princeton postdoctoral researcher Monika Schönauer asked 32 people to sleep in the lab after they had been asked to memorize 100 pictures of houses or faces. By analyzing their patterns of electrical brain activity, she found she could effectively read their minds, predicting which images they had been studying while awake — because they were replaying them.

Even as scientists elucidate the role of sleep, it is not always clear how to do it right. For example, the American Academy of Pediatrics recommends that preschoolers get 10 to 13 hours of sleep each day, including naps, but does not say how that time should be carved up.

“Why do we know so little about this really critical function?” said Tracy Riggins, a developmental psychologist at the University of Maryland. “I always think of growth charts at the pediatrician’s office. Physical growth: You study thousands of children. You know exactly that your child is in the 63rd percentile for kids her age. Why do we not have that for the brain?”

Riggins teamed with Rebecca Spencer, a neuroscientist at the University of Massachusetts at Amherst, to study how naps affect memory in preschoolers — a critical scientific and policy question as more schools offer prekindergarten. Spencer had previously found that preschoolers who were taught a memory game performed better after a nap than if they had been kept awake. This summer, she found that napping helped strengthen complex emotional memories, but only when combined with a night of good sleep.

Now, the pair are recruiting families to try to understand the brain differences between children who nap and those who have stopped. It is an experiment already taking place in the real world as some preschools offer French lessons, swimming or other enrichment in lieu of nap time. Napping for two hours may seem like a waste — unless sleep itself is crucial.

Riggins and Spencer’s idea is that napping performs a function a little bit like clearing off a desk, organizing and filing papers so they can be retrieved later. If the desk is not cleared, the piles can get mixed up.

“This is the drive some people have to be the best and the brightest — some of these high-income preschools are trying to cram so much into the day that they’re minimizing nap time,” Spencer said. “The idea is they’re not napping, so they can learn more. But they may lose the attentiveness to be able to learn more.”

Sleep problems have long been recognized as a symptom of psychiatric and neurological disorders, ranging from depression to Alzheimer’s. But increasingly, researchers are exploring the two-way street between disrupted sleep and disease. And researchers who started out interested in cognitive functions such as memory or brain development are finding themselves focused on sleep because it is so fundamental.

Insomnia, for example, is both a risk factor for depression and a complaint of people with depression. Adults over 50 with lots of insomnia symptoms were more likely to fall than those without, according to one study. Studies have linked pain to poor sleep, showing that older people with sleep problems are more likely to develop pain, and vice versa.

“A lot of medical approaches have ignored sleep,” said Ken Paller, a cognitive neuroscientist at Northwestern University. “People think about [poor sleep] as one of the complaints someone with depression or other disorders might have, rather than a critical part of the whole etiology of the disease, which is a new idea.”

That idea has spawned fresh interest in finding ways to enhance sleep for therapeutic benefit. One thread of research focuses on slow-wave sleep, which diminishes as people age. A small study presented at the Society for Neuroscience conference last year found early evidence that playing “pink” noise — similar to white noise but with different frequencies — in a specific pattern could increase the proportion of time people spent in restorative deep sleep.

“It’s one of those things thought to be a fountain of youth,” Buxton said.

Others are examining whether sleep’s memory consolidation qualities can be enhanced. In Paller’s research, people learned to associate sounds with visuals placed on a grid — for example, a cat’s meow with a picture of an actor and the sound of a violin with a picture of the Eiffel tower. Then they napped, and researchers played half the sounds — quietly enough so people didn’t wake up — to see whether they could reactivate the memories.

After waking, the researchers found, people were more likely to forget the placement of visuals whose sounds were not played while they slept. When the sounds were timed to coincide with bursts of sleep activity called spindles, their recall upon waking was even better.

Paller hopes the approach can be used to help reinforce learning during rehabilitation — for example, among stroke patients learning to use their arms again.

There is growing interest in sleep outside the lab, too. At the massive annual CES electronics show in Las Vegas, sleep-tech products got their own marketplace in 2017. The National Sleep Foundation show in Houston last March hosted 200 brands and companies.

While interest in sleep is soaring, many sleep researchers worry that the risks of too little sleep still are not taken seriously. Doctors routinely measure blood pressure and weight, they say, but many never ask patients how they are sleeping.

“You had a lecture at school that was about [dangerous behaviors],” Matthew Walker, a psychology professor at the University of California at Berkeley, said. “Why didn’t anybody come in and tell you about sleep?”