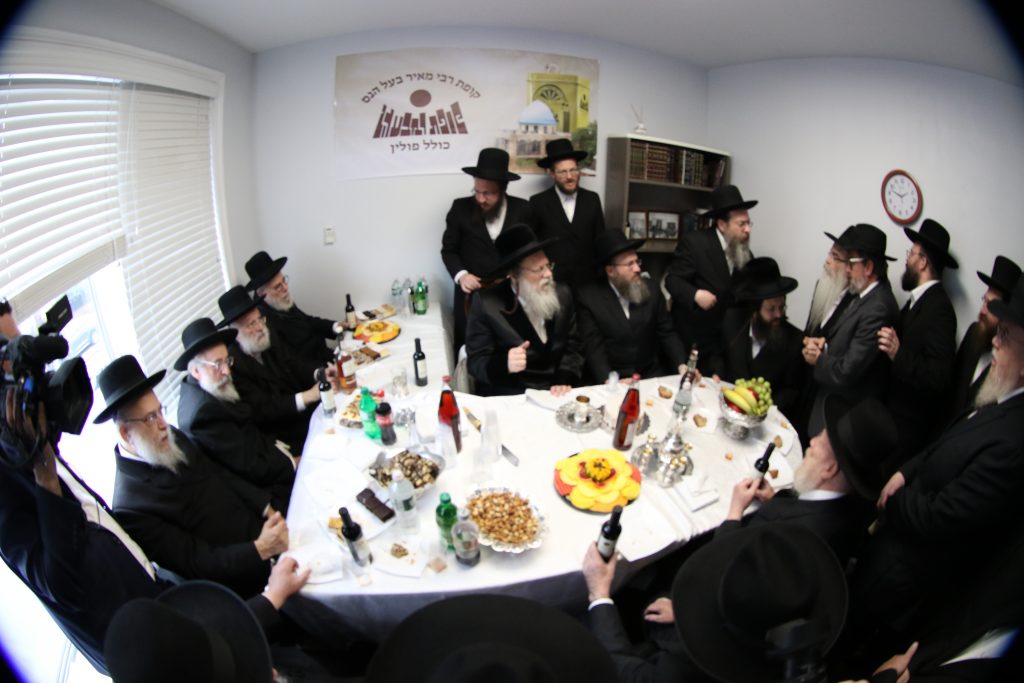 Kupath Rabbi Meir Baal Haness Kolel Polin, the renowned tzedakah empire that was founded to financially fend for Eretz Yisrael’s poor and needy, has, like the rest of the world, had a very tough few months.

Up to the present day — and now even more than ever — Kolel Polin is the address for thousands of Eretz Yisrael’s Yidden in need. Here, the needy families living in Eretz Yisrael are treated with utmost honor, respectfully receiving the necessary financial support to help them through their sorrows.

Throughout its many years of tzedakah activities, needy families in Eretz Yisrael with roots in Poland have turned to Kolel Polin for help. This tzedakah goes to great lengths to make sure its activities are done in the most discreet way, so as not to embarrass the tzedakah recipients.

Established nearly two centuries ago, Kolel Polin was the lifeline for the Jews who left everything behind in Poland and moved to Eretz Yisrael. There, they relied on the sums sent from Poland to survive.

Today, Kolel Polin has evolved into a sophisticated tzedakah organization that serves thousands of needy families in Eretz Yisrael under the leadership of the previous Rebbes’ successors, the present leaders of the Polish Chassidic courts throughout the Holy Land.

The Kolel’s unfortunately expansive roster includes families with various challenges, most of who struggle valiantly yet vainly against abject poverty.

Kolel Polin has taken on itself to be the lifesaver for thousands of families across Eretz Yisrael who can’t make ends meet. Without the Kolel’s help, these families would lack basic food, clothing and vital medical treatment.

To meet these ends, Kolel Polin’s devoted hanhalah convenes for many hours, finding the most honorable way to distribute the large amounts it receives, especially before the Yamim Tovim.

Many of the recipients are distinguished families, crowns of Torah Judaism who have dedicated their lives to Torah study and avodas Hashem. Others are suffering from illness and disease, with no one else to turn to.

With close to 40 offices across the world, including the United Kingdom, Belgium, France, Canada, Mexico, Australia, the Netherlands and Gibraltar, as well as a large office in Brooklyn, Kolel Polin remains a reliable conduit for those who wish to see their tzedakah funds reach the right address.

We speak with the Kollel’s General Director, Rabbi Moshe Betzalel Borzikowsky, just a few days before Yom Kippur, catching a few minutes between phone conversations with donors and people with requests.

“Kupath Rabbi Meir Baal Haness-Kolel Polin ensures the tzedakah given by its generous donors goes as far as possible.

“For that reason, we have as little overhead as possible. Another thing we have implemented is that for the Chagim we don’t have a general food distribution, but instead we give the families vouchers, to purchase food and clothing for Yom Tov in stores.”

What is the main activity of the Kolel?

“There are three main parts of our Kolel; each could be a mosad of their own, the vast numbers that we deal with. The first is Yom Tov, before Pesach and Rosh Hashanah, the second is help for medical issues and the third is for weddings. The last two are obviously monetary and not vouchers.”

How do you ascertain who receives and how much to give?

“The hanhalah convenes at least once a month, carefully analyzing the many accumulated requests.

“On hearing of a family in need, we make the necessary checks. Only after we are certain that the family is really needy are they added to the already long list of recipients.”

Rabbi Borzikowsky adds that if the request is from the gabbai of the shul they daven in, Kolel Polin relies on the gabbai. “And I don’t mean the gabbai who calls out the aliyos, rather the gabbai who is active in the community and knows the families and, chalilah, their troubles.

“Every request is accepted — whoever asks, gets. But the hanhalah has to decide how much is given for each request. Very often, one of the hanhalah cites an amount that he believes would be sufficient, and another member disagrees, raising the amount.

“There is no such thing as one of the hanhalah members deciding alone; everything must be authorized by the hanhalah.”

“Right, it wasn’t so prominent in our Pesach distribution, but ever since, oy, we haven’t had a quiet day,” Rabbi Borzikowsky notes sadly.

“And even though our Pesach distribution was already closed by the time it started having any influence in Israel, we had to quickly approve of a further budget — over 600,000 shekels — for those days before Pesach and the last-minute requests.

“Just the other day, after we had already closed the Tishrei distribution, I got a call from someone who I knew as a baal parnassah, and he tells me that he managed to shlep through till Tishrei — even though he has been out of a job for nearly seven months, but now he just can’t do it. Obviously, we couldn’t turn him down and we gave him as well.

“Another thing that we changed Pesach time was that, due to the lockdown, many stores were closed, so we gave people bank transfers.”

Since most of the donations to the Kolel are from overseas, how have you managed in these months?

“I was actually in America only once in the last half year, when regularly I’d be there several times. Even those overseas who had some sort of financial stability are no longer so forthcoming with donations; it’s not easy for anyone anymore.”

Recipients Have Their Say

The Kupath Rabbi Meir Baal Haness Kolel Polin distributions before the Yamim Tovim are a source of joy for the many destitute families supported by the organization.

One merely needs to listen to a few of the many phone calls and telephone messages or read the scores of faxes and letters that have arrived at the Kolel’s offices to begin to fathom the central role tzedakah plays in the lives of so many families throughout Eretz Yisrael.

“These phone calls are what gives us chizuk to keep going,” says Rabbi Borzikowsky.

“Many times, it’s not just the money or food that we give to the family, but a home can be totally changed without having a stable income and, all of a sudden, after the packages come on Erev Yom Tov, the whole household changes and shines.

“It’s heartwarming to know how many almanos and yesomim we help, how we simply changed their Yom Tov and turned it into that — a happy day!”

Besides the Kolel’s biannual distributions before Pesach and in Tishrei, the tzedakah is active throughout the year, giving financial support wherever needed.

The Kolel provides for a variety of needs. Stipends for widows, orphans and individuals who would otherwise struggle to raise their families with dignity; housing for young couples; hachnasas kallah funds; a chasunah gemach; financial support for those in need; a large loan gemach; paying medical fees for those who can’t pay their own; a newborn baby fund; an unemployment fund; and much more.

The Kolel also has a special fund to cover the high costs of operations, medical treatment and dental surgery. These treatments are very often matters of life and death.

Aside from these many distributions, whenever the hanhalah hears of a family in financial distress, they open their hearts and provide the resources to set the family back on its feet. Everything is, of course, done in the most discreet way so as to maintain the recipients’ dignity.

“I’ll tell you an interesting story,” Rabbi Borzikowsky adds, when he wants to show how straight and orderly the Kolel is run. “A few months ago, we had a tax inspection in our office in Yerushalayim. Two people from the Tax Department came and looked over the books. Baruch Hashem, they found it all in order and remarked that they had barely ever seen such an organized tzedakah.

“Before they left, one of the team asked me for a kippah and a tzedakah box, as he made his donation to the Kolel, after recognition of the great work we do here.”

The Gedolim of previous generations instructed every individual to donate generously to provide for the poor people of Eretz Yisrael, adding that it was obligatory to contribute to this institution before any other causes.

Following these directions, Kolel Polin has become a central part in many Jews’ lives. Whenever they need a yeshuah, they daven to Hashem in the name of Rabbi Meir Baal Haness and donate to the Kolel that carries his name.

With the tefillah “Eloka d’Meir aneini — may the G-d of Meir answer me,” Yidden solemnly drop their tzedakah contributions into the Kolel Polin Kupath Rabbi Meir Baal Haness pushke, putting their trust in the renowned, ancient tradition that the mitzvah of tzedakah leads to yeshuos. By donating to Kolel Polin Kupath Rabbi Meir Baal Haness, Yidden know that their donations will go to the best possible causes.

At the pinnacle of the week, the house glowing in preparation for Shabbos, women make the most of the eis ratzon of lighting Shabbos candles by first dropping coins into their Rabbi Meir Baal Haness pushkes, knowing that in the merit of supporting the many whom Kolel Polin has taken under its wings, their tearful tefillos will be accepted in Heaven.

The same tzedakah is given along with tefillos for any yeshuah needed, be it to find a lost object, to be successful in a business transaction or before leaving on a journey.

Also when rejoicing at simchos, Klal Yisrael doesn’t forget the poor: Before leaving the house, the baalei simchah drop their coins into the pushke, pleading to Hashem that all their tefillos should be accepted in the merit of the tzedakah, in the merit of Rabbi Meir Baal Haness, and in the merit of the many talmidei chachamim supported by the Kolel.

Although most of Kolel Polin’s budget is from fundraising events across the world, a significantly large amount comes from these pennies dropped into the pushkes.

Established and Supported by Gedolei Yisrael

Kolel Polin Kupath Rabbi Meir Baal Haness was the central tzedakah of Poland, with all its tzaddikim and Rebbes supporting the fund, collecting money and writing letters of endorsement.

The Kolel was established over 200 years ago by the tzaddikim in Poland, started by Harav Mordechai of Neshchiz and continued by the Chozeh of Lublin and the Avodas Yisrael of Kozhnitz, zechusam yagein aleinu.

However, the idea started long before. The Ramban, who restarted the yishuv in Eretz Yisrael 780 years ago, made a takanah to support Eretz Yisrael’s poor, and Gedolei Yisrael throughout the generations elaborated on its importance.

The Chida stresses the importance of this takanah, writing that the prayers of the Yidden in chutz laAretz can only rise to Heaven if they join with the Yidden of Eretz Yisrael by donating to the poor.

Harav Shlomo of Karlin, zy”a, emphasized the significance of this tzedakah to his Chassidim, and appointed gabba’im to collect money for Kupath Rabbi Meir Baal Haness.

These gabba’im were replaced every two weeks, and the Rebbe was careful not to be helped by the Chassid whose turn it was to be a gabbai for Kolel Polin Kupath Rabbi Meir Baal Haness.

“You are a gabbai of Eretz Yisrael, how can I dare use you to serve me?” the Rebbe explained.

We ask Rabbi Borzikowsky what the future plans are in Kolel Polin.

“No one knows what lies ahead of us; we are all davening for a good year, a year of hatzlachah, refuos and yeshuos.

“But our plans, b’ezras Hashem, are to keep going with as much, if not more, distributions. We will do whatever it takes to ensure that whoever is in need, chalilah, receives what they need.

“As our tradition for nearly 200 years shows, we’re here to help.”