Interpoliticization: Why Welcoming The Palestinian Authority May Spell The End Of Interpol

Just how much damage to Israel will the Palestinian Authority’s – or, in the words of those who approved the decision, the “State of Palestine’s” – membership in international law-enforcement organization Interpol cause? “Unfortunately it’s another checkmark in the PA’s efforts to use international organizations to advance their anti-Israel agenda,” according to B., an IDF security analyst who asked that his name not be used because of security issues. “But if Interpol isn’t careful, it could badly hurt itself, as it runs the risk of being turned into another political tool for the Palestinians to use against Israel. In fact, I believe, the organization is at greater risk than Israelis are,” B. told Hamodia.

The PA was accepted as a “full member” of Interpol on September 27 – much to the chagrin of Israel, which lobbied hard against the approval. Israel had previously been able to successfully hold off the PA’s membership; last year, it succeeded in getting the matter removed from the agenda of the organization at its annual meeting, where new memberships are approved. No such luck this year, though; the secret ballot at this year’s meeting in Beijing had 75 countries out of the 133 participating in the meeting approving the PA’s membership in the group, 24 opposing, and 34 abstaining.

Chalk up another success to the PA’s self-declared objective to achieve legitimacy by joining as many international organizations as it can; the more organizations that accept “Palestine” as a member, the more legitimate Palestinian claims of Israeli occupation are, and the more likely the international community is to lean on Israel to withdraw from Yehudah, Shomron, and most of Yerushalayim, as the PA demands.

In 2015, the PA accepted the Rome Statute, and was accepted as a member of the International Criminal Court. Since then, Haaretz reported, the PA has been building a case against Israel for war crimes, including the establishment of and expansion of Jewish settlements in Yehudah and Shomron. The effort has been thwarted by what Haaretz said were “messages from Washington” to the PA that “suing Israel in international courts would trigger severe steps by the U.S. administration, including the closure of PLO offices in the American capital and an end to economic aid to the Palestinian Authority.” 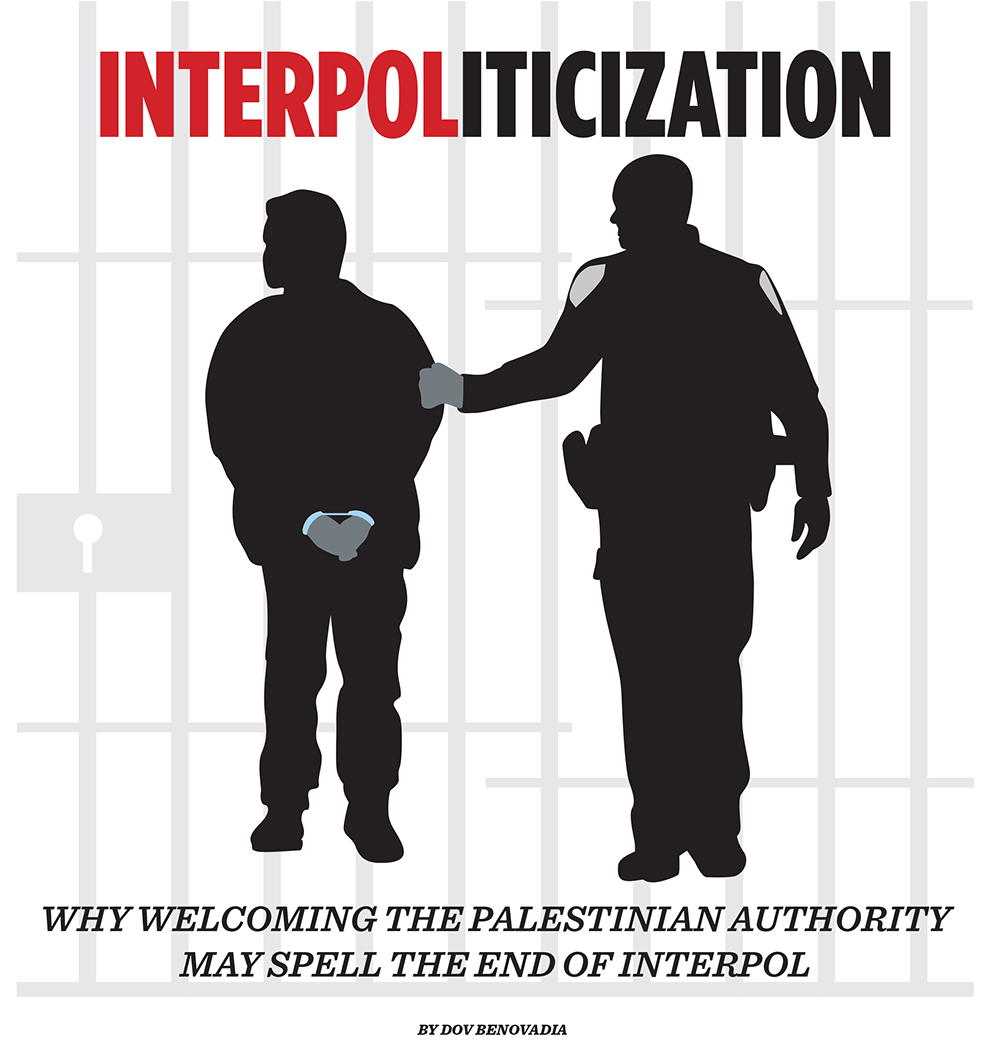 While the PA has yet to successfully bring charges against Israel at The Hague, it has been able to convince several foreign courts – most notably in Spain and the U.K. – to prosecute Israeli leaders for “war crimes.” In 2009, a British court issued an arrest warrant against former Foreign Minister Tzipi Livni for such crimes, while in 2015 a Spanish court outdid the Brits, issuing a warrant for the arrest of none other than Prime Minister Binyamin Netanyahu himself, along with other Israeli political figures, including former Defense Minister Ehud Barak, current Defense Minister Avigdor Liberman, former Interior Minister Eli Yishai, and others. As far as anyone knows, those orders are still outstanding, so if Netanyahu or the other officials named by the court visit Spain, they could be subject to arrest and prosecution.

With Interpol membership, a lot more Israelis could be facing arrest in a lot more countries. While Palestinian lawyers have to persuade judges in countries that recognize the principle of Universal Jurisdiction – which allows courts to prosecute individuals for “crimes against humanity,” even if those crimes were committed in places outside of that court’s jurisdiction – Interpol membership will avail the PA of a much more efficient international organization that could issue arrest warrants that would be valid in all 192 Interpol member countries.

Or not. Interpol bills itself as the “world’s largest international police organization,” whose role is “to enable police around the world to work together to make the world a safer place.” Interpol’s goal is “to facilitate international police cooperation even where diplomatic relations do not exist between particular countries. Action is taken within the limits of existing laws in different countries and in the spirit of the Universal Declaration of Human Rights.” By facilitating the exchange of information and fostering cooperation, the group “helps police on the ground understand crime trends, analyze information, conduct operations and, ultimately, arrest as many criminals as possible.”

Lest one get the wrong idea, Interpol is not an officially sanctioned legal body in any country; it is a voluntary organization of police forces around the world that exchange information, data and technology (forensics, intelligence, etc.) and render assistance to each other. The group is actually much more involved in helping to find missing persons than in catching criminals; currently, there are 133 individuals on Interpol’s Wanted list, and 1,157 missing persons that it has alerts out for.

Interpol does not issue “arrest warrants”; those “warrants” are actually alerts that an individual is wanted in a specific jurisdiction. An Interpol Red Notice urges local police to locate and arrest (“location and arrest of wanted persons with a view to extradition or similar lawful action”); a Blue Notice asks police “to collect additional information about a person’s identity, location or activities in relation to a crime.” A Yellow Notice asks police “to help locate missing persons, often minors, or to help identify persons who are unable to identify themselves.” Other notices seek information on unidentified bodies, information on identities, and warnings on potential public threats.

As an Interpol member, the PA could certainly ask the organization to issue an arrest warrant for Israelis – assuming, of course, it could pin a crime on its target. According to Interpol, “our Constitution prohibits any intervention or activities of a political, military, religious or racial character” – meaning that charges of “war crimes” for “occupation of Palestinian lands” is unlikely to get an Interpol response. The PA could, however, try to charge residents of some communities in Yehudah and Shomron built on land claimed by Palestinians with attempting to steal land, or charge heads of communities or state officials for encouraging such “land theft.”

Last week, the PA tried to persuade the ICC to open an investigation into the “terrorist activities” of the Jewish activists known as the Hilltop Youth. That is something that would likely interest Interpol as well, and the Palestinian Police could try to issue Red Notices for “criminal activities” like “Price Tag” tire slashing and the like. For corroborating evidence, the PA needs to look no further than statements by numerous Israeli officials, such as one by Defense Minister Liberman, who called the activists “disturbed idiots” who deserved to be detained without trial under administrative detention rules.

The issuance of a Red Notice would indicate to police around the world that an individual is wanted for a particular crime, and would apply to all Interpol members – including Israel, which would be unlikely to act on PA-issued notices on its own citizens. Would other countries? That depends; the Arab and Muslim countries of the Middle East would almost definitely seek to arrest targets of the notices, if those targets happened to visit those countries; a country like Spain, which has outstanding arrest warrants against Israeli leaders, might act on those notices as well. Other countries, like the United States or Germany, might choose not to. It would be up to the individual police organization in each jurisdiction, or the national policy of the public safety authorities in each country.

And that, according to security expert B., is where Interpol could find itself in trouble. “Today, Interpol is a respected international organization, whose word carries weight in the international community, but somehow, when the Palestinians get involved in these groups, the reputation of these international bodies sinks quickly. Just look at what happened to UNESCO [the United Nations Educational, Scientific and Cultural Organization]”, said B. In 2016, UNESCO declared the Kosel and Har Habayis “Palestinian heritage sites,” and deplored Israel’s restoration work in what it called “Al-Buraq Plaza,” the Muslim name for the Kosel Plaza. It was the latest in a long line of anti-Israel deprecations since 2011, when the PA first joined the organization – prompting the U.S. to cut funding for it.

“It’s resolutions like that that have made UNESCO a joke among thinking people,” said B. “Diplomats dither and fuss over the language of these resolutions, but nobody takes them seriously.” In other words, said B., UNESCO has spent its moral capital on ridiculous attempts by the PA to deny what everyone knows – in this case, that sites like the Kosel and Har Habayis (and Me’aras Hamachpelah, which UNESCO terms a Palestinian historical site as well) are as Jewish as they come.

If the Palestinians try to use Interpol in this politicized manner, it’s the organization that will suffer, predicts B. “Interpol’s power is in its ability to get police forces around the world to take its mission of international law enforcement seriously, and if it becomes politicized, it is going to find that people will stop taking it seriously. No country or police force is required to honor its notices, and countries that have not used other means to prosecute Israelis, such as Universal Jurisdiction rules, will likely ignore politicized arrest warrants against Israelis, too. If Interpol expends its moral capital on the Middle East conflict, it is going to find that countries and police forces will indeed begin doing so.”