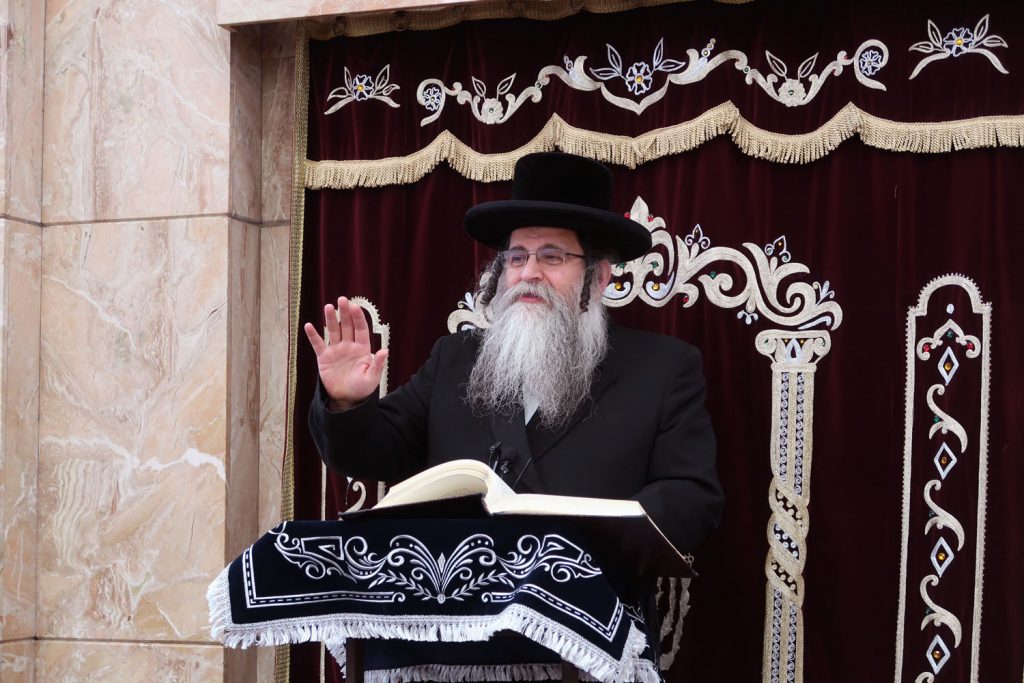 Harav Aharon Schiff, shlita, serves as just the third Rav of the Machzikei Hadass Kehillah of Antwerp, Belgium since WWII. His predecessor, Harav Chaim Kreiswirth, zt”l, the Rav for nearly half a century, was a talmid of Yeshiva Chachmei Lublin, which was founded by Harav Meir Shapiro, zt”l. Rav Schiff related how Rav Kreiswirth would often reminisce about Chachmei Lublin and its illustrious Rosh Yeshiva.

The Rav, who leads the kehillah through these turbulent times, speaks frequently on many topics relevant to the Antwerp community in particular as well as the condition of European Jewry in general. On Wednesday, 4 Teves, 5780/January 1, 2020, Rav Schiff will share his wisdom and feelings with the tens of thousands gathered for the 13th Siyum Hashas of Daf Yomi. Over the past few days, he shared his thoughts about the upcoming historic gathering and the potential it has to advance ahavas haTorah and kavod Shamayim.

On the one hand, we must be aware that Chazal tell us that the Luchos rishonos, which were given publicly, were affected by ayin hara, as Rashi alludes to in Parashas Ki Sisa [34:3],” Rav Schiff said. “Nevertheless, we also find that the Sefer Hachinuch [612] explains that the root of the mitzvah of hakheil is to have a large gathering of people. And when they are asked, ‘What is the purpose of this gathering?’ they will answer, ‘We came to hear the Torah, which is our glory and splendor.’ So, when it comes to ruchniyus, there is a place for publicizing the event.

“Similarly, we find that when the Yidden brought the bikurim to Yerushalayim, the people joined together for the journey up to the Beis Hamikdash. Why did they do it in such a public manner? When the publicity can help increase the fulfillment of mitzvos, we permit it, in order to create greater participation.

“Rav Meir Shapiro himself made a large public gathering when he celebrated the chanukas habayis to inaugurate the building of Yeshivas Chachmei Lublin. This was because it was not to celebrate the completion of the structure, but rather the commencement of increased limud haTorah. We always give a hodaah for the past, with a push for the future, to do even more. Similarly, the simchah of Klal Yisrael is not for the finish, but rather for the start of a new, more intensified learning of Shas.”

So how do we accomplish this? The Gemara in Avodah Zarah (35b) tells us that a talmid chacham is like a flask of phlaitin (balsam oil). When it is uncovered, its fragrance spreads, but if it is covered it does not. “By those who completed this cycle of Daf Yomi rejoicing in their simchas haTorah openly with others,” the Rav declares, “there is an opportunity to increase the kvod haTorah and to add ever more lomdim. The raison d’être for this gathering is to use it as a vehicle to expand the quantity of learners and increase the quality of those who already learn Daf Yomi.

“Some may wonder what I mean by that. I feel that if a person learned one cycle with Gemara and Rashi, perhaps he should undertake to learn the next round with Tosafos as well. If that proves too difficult, since Tosafos can be challenging, a person can learn the peirush of the Rosh, which is often easier, or look up in the Rambam how he paskens,” Rav Schiff suggests. “The point is to strive to increase the quality and depth of understanding each time you review the Daf. A person has to learn with a hischadshus and freshness, and each cycle can bring something new, since the Torah is ‘aruka mei’eretz midah unrechavah mini yam — longer than the earth and wider than the sea [Iyov, 11:9].’ So there is always something to add which will deepen your understanding.”

The hazard to be avoided is if people take hold of the tafel, what is secondary, and disregard the ikar, what is primary. “Imagine if someone attends a wedding, and he eats, drinks and dances away the night, but totally forgets about the chassan and kallah. The desired goal of this gathering is of course to increase the ahavas haTorah and the cheishek for limud haTorah,” said the Rav. “With this, it will be a means by which kvod Shamayim will be increased.”

When discussing the advantage of those who join in the Siyum, Rav Schiff mentions the Gemara in Chagigah (9a) which says that the passuk “me’uvas lo yuchal liskon v’chesron lo yuchal lehimanos — What is crooked cannot be straightened, and what is missing cannot to be counted” (Koheles 1:15) refers to a person whose friends are uniting for a mitzvah and he does not join them. Rav Schiff says, “The koach of a tzibbur cannot be diminished, and Agudas Yisrael deserves tremendous credit for being the driving force behind this maamad of kvod Shamayim.

“A talmid chacham must be tofeiach al m’nas lehatfiach, meaning that he should be able to exude such a degree of simchah and ahavah for the Torah that others should get caught up in it as well,” the Rav stated. “I’d like to share a vort which the Sfas Emes writes in Parashas Va’eirah 5635. Moshe Rabbeinu said, ‘If Klal Yisrael did not listen to me, then how will Pharaoh listen to me [Shemos, 6:12]?’ Rashi says this is one of the ten places in the Torah where there is a kal vachomer. Many meforshim question this, as the kal vachomer seems flawed, since Klal Yisrael did not listen to what Moshe said because they were overburdened by work, but perhaps Pharaoh would hear him out. The Sfas Emes says that the only way that Pharaoh could have any ability to hear the the words of Moshe would be through Klal Yisrael. Therefore, if Klal Yisrael did not listen, then Pharaoh would have no means of hearing it. The Sfas Emes means to say that the heart of Pharaoh is clogged, and cannot hear the words of Hashem. The only way possible would be if Klal Yisrael would listen, since that would create shtralen [rays of light] for others to perceive it.

“The lesson to learn from this,” explained Rav Schiff, “is that Klal Yisrael, through their own limud haTorah, can create a new conduit for others to hear the dvar Hashem. This is the task which the lomdim are charged with, which is to create new trails so others can follow in their path.”

“Could Rav Meir Shapiro have imagined what he accomplished by Daf Yomi?” asked the Rav of Antwerp. “Even in the most distant corners of … Jewish settlement there has seen such success with the proliferation of Torah through the Daf Yomi. I think the reason for its success is due to the incredible mesirus nefesh that Rav Meir Shapiro exerted on behalf of Torah and kvod Shamayim. He literally walked the pavement of cities throughout the world to gather the funds to establish Yeshiva Chachmei Lublin, from which such tremendous Torah luminaries the likes of Harav Shmuel Wosner, zt”l, and others emerged. The amazing extent of the spread of Daf Yomi is a result of Rav Meir Shapiro’s commitment to the ideals he worked for.”

Who would believe that there were naysayers in Rav Meir’s time who opposed his suggestion? “As our Rav, Harav Chaim Kreiswirth, zt”l, would repeat often,” Rav Schiff related, “Rav Meir Shapiro was a man of vision and foresight. He imagined the advantage of people learning and ignored the negativity that existed. Rav Kreiswirth said he was naah doresh vena’ah mekayeim — he preached to accomplish, and accomplished what he preached.”

As Klal Yisrael gathers for this momentous occasion, we must realize that the unity engendered will enable everyone to join as one nation and strengthen us as a whole. “By joining the lomdim of Daf Yomi, a person becomes part of Judentum, a chelek of the klal. In our times, our religious rights are being attacked on a daily basis. This of course includes shechitah, which is being assailed in Europe, and the chinuch of our children, which is under attack worldwide. But as the Gemara in Kesubos [3b] says, ‘gezeirah avidi d’bteilah — decrees are bound to be abolished.’ We must hold together as one strong group and persevere.”

Rav Schiff reminds us, “We must show Hakadosh Baruch Hu how much these items mean to us. Is the chinuch of our children really so chashuv by us? Is our s’char limud [tuition bill] the first bill we pay each month, or do we leave it for last? Are we scrupulous as far as kashrus, or do we accept any food item which has any sort of shtemple [certification stamp]? In a play on words, the Belzer Rav once quipped ‘motzi asirim bakosharos’ – He takes the prisoners out at the most opportune time [Tehillim, 68:7] – can be misconstrued to mean we ‘exclude prohibitions regarding kashrus.’ If we show Hakadosh Baruch Hu how much our Yiddishkeit means to us, how much the chinuch of our children means to us and how much kashrus means to us, He will certainly protect it for us.”

“And with the Siyum of Daf Yomi,” he adds, “we can reveal the value we have for ahavas haTorah and kvod Shamayim.”

Hamodia would like to thank Naftoli Lunczer of Antwerp, Belgium, for his assistance with this article.