Prime Focusing in the Dark: Reactions From Orthodox Officials to the Jersey City Shooting 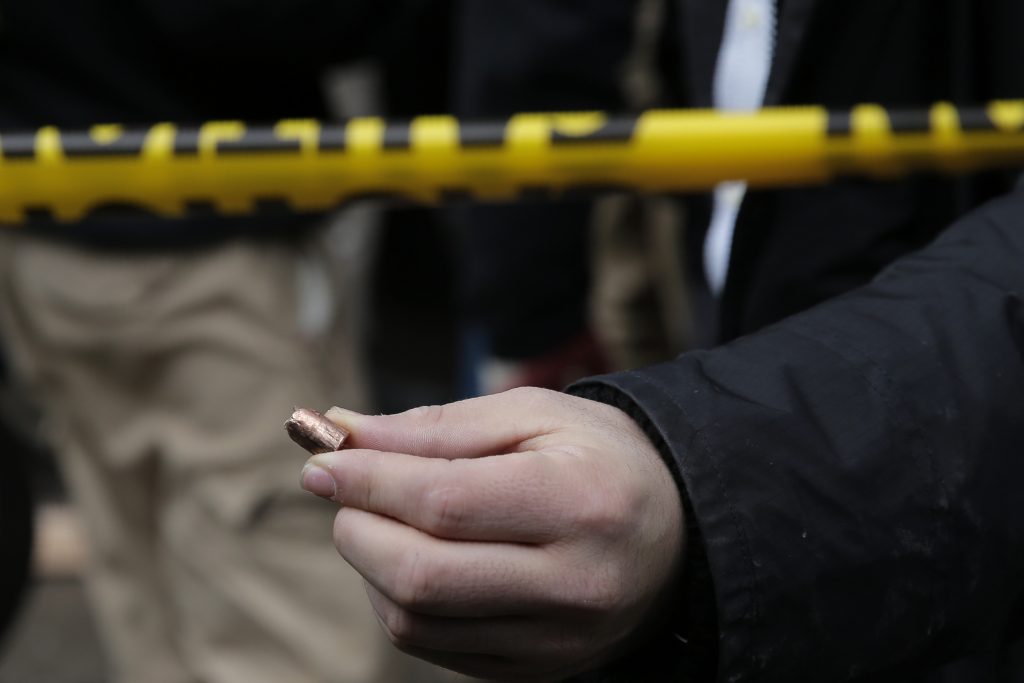 The multi-faceted story of the rise of anti-Semitism in America has gone on long enough to move through several stages. Shootings at the Tree of Life Congregation in Pittsburgh and at the Chabad of Poway morbidly heralded a dark new reality.

Still, Tuesday’s horrific shooting at a kosher grocery in Jersey City, the first lethal attack on Jews in the New York metropolitan area — home to the nation’s largest and most visible Jewish communities — appears to be yet another level of intensity.

In the 24 hours after the prolonged shootout was labeled a “targeted” attack, many public officials were quick to condemn hatred and pledge public resources to help stamp it out.

One day after events unfolded in Jersey City, and as their potential implications for New York and New Jersey’s many Jewish communities began to come into sharper focus, community advocates and elected officials took stock of what this tragedy means for their efforts to deal with an additionally darkened reality.

Rabbi Moshe Dovid Niederman, president of the United Jewish Organizations of Williamsburg and North Brooklyn, has been actively engaged in attempts to stem a spate of anti-Semitic attacks and vandalism in his neighborhood. He acts as a spokesman for the Williamsburg-based Satmar community with which the Jersey City victims were affiliated. Rabbi Niederman minced no words, saying that he felt unchecked anti-Orthodox speech in the media and by some public officials have contributed to the violent threats facing Jews in the region.

“When there is an attack like this there is an outcry from everyone, but for too long, when people have spoken or written against Chassidic Jews there was silence not only from public officials but even from most of the secular Jewish organizations. In some cases, you even hear a doubling down of support for those ideas. So what happens? These ideas of hate become acceptable, until someone goes out and acts on them. This is something that has to become impermissible in our society.”

Rabbi Niederman said that the level of fear in the community is steadily rising, with recent events raising it to an even higher pitch. Local law enforcement has been responsive, he said. But what is needed to gain a full understanding of the threat and address it has exceeded the capability of any single agency. He said that what is now needed is an effort to coordinate among different agencies of state, local, and federal government, working in tandem with official representatives of the Orthodox community.

“We can’t minimize what is happening here and we are not going to solve what is happening by putting a band-aid on it. Jews deserve to be able to walk the streets and feel safe,” Rabbi Niederman said. “No one apparatus can take care of what is going on. Government needs to bring together different agencies and sit with the community to address its security needs. They also need to bring in criminologists or whatever other professionals are trained to analyze these trends, and get a better picture of what is behind this phenomenon.”

Mr. Moishe Bane, President of the Orthodox Union (OU), said that while efforts to ensure adequate security for institutions and other tangible measures to minimize threats must remain a priority of community advocates, it is important to acknowledge the value of strong statements of support from public officials.

“It’s something we should draw comfort from, and we must appreciate that officials and the police are sympathetic to our needs, and that when a tragedy does occur we are not encountering silence,” he said. “There is always more to be done, but they are committed and we need to be grateful for that.”

“A neighbor came to me and told me that he doesn’t want to let his son go out to tisch Friday night because he can’t sleep until his son gets home. I never imagined that I would ever hear such a thing here in Boro Park, but this is not a story about one or two incidents, and this is not about one town or another. This is a serious epidemic, plaguing the city and areas around it, that needs to be addressed.”

Many have commented that the hyper-politicization of life in America has played a significant role in hindering efforts to fight rising anti-Semitism; opposing sides use various expressions to highlight their respective narratives, but ignore others that conflict with it. Left-leaning groups have been quick to associate two lethal attacks on Jewish houses of worship — and a rise in online white supremacist rhetoric — with President Donald Trump. Right-leaning groups have largely highlighted anti-Israel rhetoric that often crosses the line into verbal and written attacks on Jews, coming largely from left-wing academics, blacks, and Muslims.

Assemblyman Eichenstein said that if threats against Jews are to be dealt with in a serious manner, people have to be able to deal with the problem without focusing either on its political baggage or using it to gain political mileage.

“I think we need to all admit that anti-Semitism is coming from the left and the right,” he said. “This is not about an attack or a victory for any party, and it is not about any particular figure, we just have to acknowledge that we have a crisis. We have to stop worrying about being politically correct about how we talk about it, and just deal with it.”

In his first year in state government, Assemblyman Eichenstein has led several efforts to increase government-funded security spending to protect schools, camps, and houses of worship. He said that, in addition to raising funding levels, law enforcement should adjust to the reality of Orthodox communities as vulnerable targets.

“The NYPD responds when something happens, and we know that when they are focused on something they are the best in the business. But if we are going to prevent these incidents from happening in the first place there needs to be an understanding that, just like Times Square is a target and needs more protection, unfortunately, so do we.”

Gary Schaer, who represents the town of Passaic in New Jersey’s Assembly, is the only Orthodox elected official in New Jersey state government. For several years now, he has spearheaded efforts to win security funding for private schools. Through his valiant efforts, that level of funding has risen steadily, despite perennial budget crunches.

Assemblyman Schaer said that while the killings in Jersey City affirm the need for government to help protect Jewish institutions, there is a limit to what security funding can accomplish.

“This took place in a commercial establishment. There is not enough money or policemen in the state to protect every corner of every block, nor do we want to live that way,” he said. “One can only hope that when people see something amiss, they report it. What seems to have happened here is that a detective saw that something was not right and gave his life trying to address it. We thank G-d for his action, and don’t want to think how much worse this could have been.”

Assemblyman Schaer said that local and state governments in New Jersey had done “a good job” of addressing threats to Jews and other vulnerable communities, but that there is no way to eliminate all threats.

“There will always be horrible, frightening, and crazy people out there,” he said. “That does not mean that we should throw up our hands and say there is nothing to be done. … I think that we would see a lot more hate crimes than we do if not for the efforts that government and law enforcement have and continue to make.”

Following the chillingly similar 2015 attack on the HyperCacher market in Paris, which left four Jewish shoppers dead, many asked if life would ever be the same for Jews in France. They demanded stronger responses from the nation’s leaders. At the time, many, both in France and worldwide, used the event to press the question of the future of Jews in Europe amid rising Islamist, anti-Semitic violence. Even for some time before that, heavily armed military police had become a common sight in Jewish areas of Western Europe.

Mr. Bane of the OU said that while it was horrible, he did not feel the Jersey City attack or the shootings in Poway and Pittsburgh presented a similar situation to Jews in America as did those in France.

“I think there’s an important distinction to make that, in general, there is not a lot of gun violence in Europe. Here in America, we have far more and, unfortunately, random shootings are part of American culture. That affects expressions of anti-Semitism too, but it does not mean that we are in the same situation that France was then.”

Since acts of violence against Jews are on the increase, there have been increased calls for schools to incorporate efforts to sensitize students against anti-Semitism in public schools, and other efforts to increase public sensitivity. Mr. Bane said that while nothing can “justify” violence, such calls also behoove the Jewish community to double-check its attitudes toward other groups.

“If we are going to make an issue of how we are spoken about and treated, we have to make sure that we are creating an environment that fosters mutual respect,” he said.

Rabbi Avi Schnall, Agudath Israel of America’s New Jersey director, has been heavily engaged in fighting anti-Semitism, especially in towns surrounding the Lakewood area, and he has been involved in the fallout of events following the attack in Jersey City. He pointed to social media platforms as a key area where he felt government has been remiss in addressing potentially dangerous rhetoric.

“This is the third incident of not a swastika and not someone getting beaten up, but of Jews murdered in cold blood for being Jewish, and in all three cases the murderers used social media to spew their hate. All of them have statements they made before these killings. If this all went under the radar, then government has to take a more proactive stance,” said Rabbi Schnall. He referenced an online forum — Rise up Ocean County — known for spreading negative and often anti-Semitic speech with an air of incitement regarding the Lakewood area. Rabbi Schnall said that repeated requests for intervention by law enforcement have come to naught.

“We hear that they’re monitoring it. Like we saw here, they monitor and monitor and then someone gets killed,” he said.

Rabbi Schnall also said that, in too many cases, local officials in areas where tensions exist over the growth of Orthodox communities are themselves at the root of the problem; that they are making incendiary comments.

“It’s reassuring to hear condemnations of a heinous shooting, but politicians have to take their own words seriously, and if they do not, and if months down the road they end up making degrading comments about Jews, there has to be outrage. But that is not what is happening,” he said. “To believe that you can eradicate anti-Semitism is wishful thinking. The question to ask is if we are doing enough to stem anti-Semitism. No one wakes up in the morning and decides to kill Jews. It comes from an atmosphere and a build-up of words, until eventually some marginal figure with a gun acts on it. If that starts at the top, it is all the less likely to stop.”